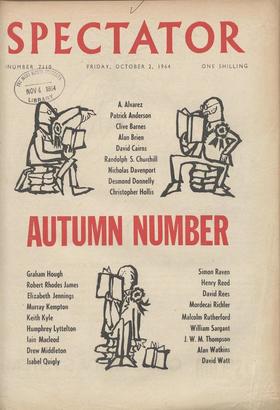 set the election campaign alight with a reported Promise drastically to cut mortgage rates. By con- trast the Labour Deputy Leader complained that the Sunday Express had put...

TN the Conservative Manifesto an unex- citing phrase clothes one of the key de- cisions : 'we therefore propose to institute a full review of social security arrangements so...

The World and the General

From DREW MIDDLETON O N the face of it, General de Gaulle's junket around South America is an ambitious enterprise in public relations. He is selling France's policy of...

Quebec and the Queen

CHRISTOPHER HOLLIS writes: Raids by schoolboys on Canadian military armouries were alarming, if absurd. Public opinion was shocked by the killings last summer and they probably...

Meanwhile, Backstage . By DAVID WATT H OWEVER boring the national campaign may be—and this one threatens to be the most boring in living memory—there is always genuine....

The Day of the Dons

Some years ago I referred to the Labour Partyi" leadership as 'a consortium of middle-aged donsA' Now almost daily one sees pictures and careeso: snapshots of Mr. H. Dumpty and...

If the pollsters aren't careful they'll talk therh - selves out of a job. The headline and the first part of the Sunday Telegraph story gave the Tories a lead sufficient for a...

every question, for example, on the experience of his Shadow Cabinet he will reply, 'Let me , first say that many of us were negotiating (and, may I add, not without success)...

Extremists Politicians and lovers long ago discovered that there are

practically no new words to describe their policies or their passions. Everything has been said before. So in this election we are all modernisers, growth merchants, prosperity...

1—A Minister Under Pressure By ALAN WATKINS I snout]) judge this city,' said the Elizabethan Sir John Harrington, 'to be another Utopia.' Norwich today may fall short of Sir...

Tailpiece At my adoption meeting tiny election agent concluded his

instructions to the members with an invitation to take a bundle of posters and car-stickers before they left. 'We want,' he said, 'to see our candidate plastered all over the...

I am quoted, accurately, of course, by a news- Paper as having said, 'Those who are sincere, devout unalterable Liberals ought to vote Liberal. If they want to stand on the...

2—The Member for Gower Street

There are some constituencies—Norwich South is one of them—where the local politicians can build up a coherent picture of their support, area by area. One ward is 'solid for...

View from the Left

Sitting Target ? By DESMOND DONNELLY (Ex-MP, now Labour candidate, for Pembroke) f rlitiY . VE had it!' said the roadman to me on 1 the A40 road to Haverfordwest. By 'They' he...

Lost Weekends By RANDOLPH S. CHURCHILL rT 9 HE Weekend Telegraph is not alone in facing serious distribution problems. Foreign sub- scribers to the Observer (who I believe are...

The Entertainers By J. W. M. THOMPSON H iGII-MINDED outrage seems to be the propel mood. 'Both the BBC and ITV have been reduced to a state of cringing terror at the thought of...

Reasonable Doubt Front MURRAY KEMPTON NEW YORK 1-11EF Justice Warren's report on the murder of President Kennedy destroys most of the assumptions that were the basis for the...

If lesser breeds, without the law Should dare to launch a nuclear war And loose the Monster that shall be The end of all humanity. l'm sure that it is only fit That Britain,...

The odd thing about the Warren Commission's report is that it is so full of life. There are so many characters in it. I think this arises from the way so many of the witnesses...

What the soldier said is not admissible evi• dence, as every good litigant knows: but we may at last be on the point of finding out what he did say. A couple of law- reform...

I CANNOT help feeling that the press is being a bit pompous about the daily news conferences given by Mr. Wilson, Mr. Maudling and Mr. Grimond. The association of lobby journ-...

Expansion This is no time, it occurred to me, to

receive a document headed ,`Quintin Hogg Centenary' —but there it was, and, of course, it came from the Polytechnic; and it is not the most recent Lord Hailsham who is being...

By KEITH KYLE T wo extreme results could come from the Nigerian general election, the first since in- dependence, which must be held before the end of the year. The Sardauna of...

In a provincial hotel the other evening I went to

the 'television room' to look at a much-adver- tised general election programme. The darkened room was crowded—but with people absorbed in the rival show, a courtroom drama....

One wonders if the stags has been reached where the

hedgehog is having to tackle more than that with which it can cope. — From a nature article in a Hertfordshire paper. The English language, too. has quite a lot up With which it...

DYLAN THOMAS SIR,—Mr. Vernon Watkins is mistaken if he thinks

I am one of those who believe that Dylan Thomas 'aimed at baffling people or at obscure utterance.' I am not being vindictive about the Welshman,, who was a good poet and...

WITHOUT PENSIONS SIR,—Much has been said, in recent discussions on

platforms and in the press, about the needs of old-age pensioners, but not a word has been uttered about the greater needs of the old people who were ex- cluded from insurance...

S1R,—Reasoned argument like 'Why Nationalise Steel?' by Edward T. Judge,

will never impress a strictly dogmatic mind like Mr. Harold Wilson's. Everybody, including Mr. Wilson, knows that the British steel industry is under management of exemplary...

Sta,—May I refer to the leading article entitled 'Mr. H.

Dumpty' which appeared in your issue for September 25? While we are in complete accord with the views put forward by Mr. lain Macleod I think it only fair to point out for the...

THE NATIONALISTS SIR,—I was horrified to read a letter from

a D. Eirwin Morgan, who referred to the Scottish Nationalists as the Scotch Nationalists. I would not like other readers to think that the party is a hunch of inebriated...

SIR,—At a recent meeting at the Victoria and Albert Museum it was decided to form a Costume Society with the object of bringing together costume his- torians, museum curators,...

IT'S NOT JUST MAKARIOS

SIR,—Mrs. Emma Eyden asserts (September 18) that my explanation that the Turkish Cypriots initiated hostilities is ludicrously unconvincing and in support of her assertion she...

SIR,—Quoodle, it seems, has always thought it a great pity that J. B. Priestley 'is so often presented as either Jolly Jack or the pipe-smoking Cassandra of the post-war world.'...

Ring Round the Moon

By DAVID CAIRNS THERE is an unmistakable air of work in progress about the new Ring at Covent Garden. This is no reason why the critics should keep their hands off it; the...

THE WAR THAT CANNOT BE WON Bilainkin (September 18), after

too many Savoy strawberries, is making intestinal complaints. He doesn't like Tunku Abdul Rahman's `petty little kingdom.' OK—but the electorate do. They actually Voted for...

MEGATONS ON THE MOTORWAY

SIR.-1 entirely endorse the points made by Oliver Stewart relating to 'ponderomotives.' He says, how- ever, that there is nothing else 'that can be done Other than to impose a...

All in Good Time

This is not to disparage, for Maggie is a remark- able achievement It scores on almost every count: on the book, on the lyrics and music, on the sets and on the performances....

THERE is one trade gap which no government, Conservative, Labour or Liberal will close: the 0 balance of payments in ' the matter of theatricalised folk-dance, where our...

The People in Between

By HUMPHREY LYTTELTON 'IT is a great mistake to think that jazz is for young people.' On the face of it, this looks like some mis- chievous perversity from a Noel Coward...

The School of Brilliance BY A. ALVAREZ I N his time, Sartre has gone into the ring with nearly every literary form, except poetry : novels and stories, philosophy, esthetics,...

Victoria R. I. By Elizabeth Longford. (Weidenfeld and Nicolson, 63s.) QUEEN Vicroata is one of our greatest national institutions. Age cannot wither her, nor custom stale her...

The Genius of John Ruskin. Selections from his writings, edited by John D. Rosenberg. (Allen and Unwin, 45s.) THERE is no easy way through the immense forest of Ruskin's work....

MR. CHAPLIN appeared in thirty-five Keystone Company films during 1914, almost all of them one- or two-reelers made in a week or less. Soon wonderfully famous, he continued the...

The Making of a Movement BY ELIZABETH JENNINGS AFTER a decade of what has been widely tiknown, at least in literary circles, as 'The Movement,' it has become impossible—much as...

The Good Author for Bernard Malamud Contrary to the views A few days earlier Of a fading Irish poet Who flared into the room With Rimbaud round his shoulder But with hair and...

Conception is a Blessing

After three boys my belly Gave up; skin stretched; grew old; 1 stare at my flesh each morning: Beetles could hide in the folds. I feel the tiny creatures Propel themselves...

The Child Walks Around Its Own Grave

The child walks around its own grave. He's surprised to see his own body Laid out, several feet below ground level. One of its hands begins to spread out of fear's grip. He's...

By WILLIAM SARGANT PHE tremendous advances that have taken I place in psychiatric treatment in recent years should be better known to the general public. They should also know...

ONE would have imagined that after the gas chamber no further suffering could be inflicted on the six million Jews, but no, what we hadn't reckoned with was insult after death....

MR. NAIPAUI. does not mention the most in- teresting thing about his first, and possibly last, visit to India. It may, indeed, easily escape atten- tion. I refer to the fact...

BY DAVID REES When the news reached Athens, for a long time people would not believe it, even though they were given precise information... . . And when they did recognise the...

Mr. Maudling's Election By NICHOLAS DAVENPORT IF the Conservatives win this election it will be due entirely to Mr. Maudling. He has steadfastly re- fused to take the...

By CUSTOS D o the stock markets influence the opinion polls and not the other way about? It is certainly strange that the quiet, confident boom in Throgmorton Street seems to...

Mark Over By STRIX THERE is no close season for claptrap, as there is for pheasants; but as we flock to the hustings the tosh- words, flushed by armies of beaters in the...

By LOTHBURY 1 HE latest report for the year ended April 3, 1964, from Furness Withy, the shipowners, is far more revealing than the previous one. Although not entirely...

By ALAN BRIEN `Now, isn't it the Venice of the West?' asked the old, unshaven Dubliner leaning against the wall of the Baggot Street Bridge over the Grand Canal. I could feel...

Smart Operators By LESLIE ADRIAN TOLERANCE of commercial double-dealing is bred in the bone with the British, no matter what they say about wily Levantines, cunning Asiatics...