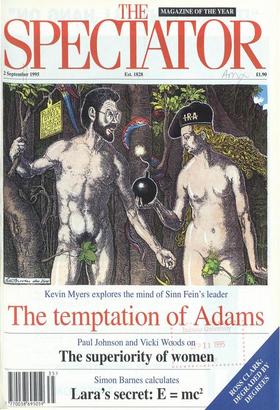 Would this be the typical Giles family of 1995? T he British Government rejected a sug- gestion by Mr Albert Reynolds, the former Taoiseach of Ireland, that talks should be...

VICKI WOODS B y dint of much special pleading with editors, I narrowly escaped being sent to Beijing this week for the UN Women's Conference. Every time I hear the news about...

FROM THE CONFESSIONAL TO THE PEACE TABLE

Kevin Myers once heard Gerry Adams order someone to be shot. That's as good a basis as any for an assessment of the man behind the year-long ceasefire in Northern Ireland...

NOW YOU SEE IT, NOW YOU DON'T

FEDS UNDER THE BEDS

Mark Steyn thought that the American militia were just gun kooks. But then he began to listen to them. . . New Hampshire 'AT ONE time,' says Scott Stevens of the White...

A GOOD many people will soon be get- ting rather tired of declarations by Labour Ministers that their predeces- sors have left things in such a shocking state that they, with...

persist. . . I THINK I must need counselling. I have arrived at this desperate conclusion because of two posters which appeared recently on the noticeboard of the hospi- tal's...

Greek nationals can study for a British degree without ever leaving Greece. And we are paying for them. Ross Clark investigates IT IS never hard to find a university admissions...

My husband struck the board and cried, 'Damn them all!' 'Whatever's the matter? I asked, looking up from my trembling cup of lapsang souchong. 'Didn't you hear those idiots on...

THE WRONGS OF ANIMAL RIGHTS

Michael Sissons explains why the animal rights movement will ultimately collapse under the weight of its own contradictions IN The Spectator of 8 July, Professor Peter Singer,...

First blast of a Peking trumpet against the monstrous regiment of feminists PAUL JOHNSON T he United Nations Fourth World Conference on Women in Peking promises to be an ugly...

Bad news for old George now see who pays to put him right for pension CHRISTOPHER FILDES 0 ne of the most cherished traditions of the British boardroom is now under threat....

Sir: Alasdair Palmer's piece about under- cover police officers might have been a lit- tle more balanced if it had been illustrat- ed by the exploits of an unattractive male...

Sir: Your moving article 'This is your tor- turer' (29 July) perhaps omitted one point. You note the general lack of remorse in Japan for war crimes, but dur- ing the war, when...

Sir: I fear that Terence Kealey, the bio- chemist who reviewed my book on total strategy, The Lost Victory: British Dreams, British Realities, 1945-1950, has seriously misquoted...

Sir: I would like to correct a mistaken impression contained in John Simpson's article on the detention of the dissident Harry Wu by the Chinese (`Video show- trial', 5...

Those were the days!

Sir: I am so sad, having read in Ian Jack's diary (5 August) that the last steam loco- motive in India is gone. My father, William Anderson, was gener- al manager of the NW...

An insult too far

Sir: Some two years ago, when one of your contributors referred disparagingly to the proud national cry of the Cornish (Oggie, oggie!), I, in emulation of our revered his-...

Sir: Auberon Waugh refers to the 'Life' sec- tion of the Sunday Times in Another voice (19 August). Much as I would be very happy to receive a Sunday Times section editor's...

Sir: We few sociopaths here in the former colonies who still consider automobiles to be politically correct celebrate Alan Judd's new motoring column in the pages of your...

Sir: I have been traduced (Low life, 5 August). At Michael Andrews' funeral I was sum- moned by Jeff Bernard. I said, 'I read your column this morning' by way of a greeting. I...

Sir: I fear that for Sarmila Bose life at War- wick amongst the unrepentant may be stressful ('Enough guilt for everyone', 19 August). Why not take a long sabbatical and at the...

Proud to be scared

Sir: I read your article about my fellow countrymen with pride (Tear of fighting', 19 August). I would have thought it prefer- able that the Hosenscheisser wet their pants (and...

Cutting Europe down to size Eric Christiansen MILLENNIUM by Felipe Fernandez-Armesto Bantam, £25, pp. 758 I t is most inconvenient to review a book that cannot be held in the...

Nothing to do with me

Eric Jacobs THE BIOGRAPHER'S MOUSTACHE by Kingsley Amis Flamingo, £9.99, pp. 282 K ingsley Amis's new novel is about an elderly literary chap having his biography written by a...

Good German, but not a good Mann

Piers Paul Read THOMAS MANN: A LIFE by Donald Prater OUP, £20, pp. 554 I n the opening to Chapter Six of Tonio Kroger, Thomas Mann notes that his hero travelled in comfort, for...

Hauteur of an auteur

Frederic Raphael WHOM GOD WISHES TO DESTROY by Jon Lewis Athlone Press, £25, pp. 240 T he Romantic prototype of the author is a free-ranging beast who, in return for creative...

That hot and terrifying summer

Return of the lone assassin

Michael Carlson OSWALD'S TALE: AN AMERICAN MYSTERY by Norman Mailer Little Brown, £25, pp. 828 I f Marina Oswald had let her husband Lee make love to her on the evening of 21...

Pippin (Bloomsbury) The Hothouse (Chichester Minerva) Spring Awakening (Barbican Pit) Squeak and bubble Sheridan Morley C ertain Broadway musicals have, on this side of the...

Time to go out The critics GARDENS Anyone who thinks that flower shows can only flourish in remote villages, might like to know that the Corporation of London holds an annual...

Legs in the air Alan Powers o r a building that is regularly con- demned to death in print, Battersea Power Station has remarkable resilience. The four corner chimneys still...

Horse sense Ursula Buchan A fter 'Machinery', the subject that I disliked most at Kew was 'Turf Culture'. The enthusiasm of the golf course green- keeper, who came in to teach...

A risky business Nigella Lawson I can't work out whether the hunger for witnessing medical procedures on televi- sion is due to our compassion for the suffering of others or...

Watch out for rust Alan Judd M y father's car has passed its MOT. Tuning, some welding, two remould tyres, electrical work and other bits and pieces amounted to £300. This...

Night visits Jeffrey Bernard 0 ne night last week my doorbell rang at 3 a.m. My heart gave a lurch as I instinc- tively thought first that it must be the police and second...

Picking up the English Taki T he most humiliating defeat I've suf- fered on a tennis court was in Klosters in August 1956. All defeats are humiliating, but there is also...

Oxford made me insufferable Nigel Nicolson O ne afternoon in 1937 I was sitting in my room at Balliol reading Zuleika Dobson, when a note was brought to me from the porter's...

Gaining face Carole Morin M asochists get on my nerves, but every month no matter how poor I'm feel- ing I pay a woman in a white coat to stab me in the face. The first time I...

IT WAS recently reported that dinner par- ties are a thing of the past. Mid-Nineties persons, apparently, find it all too much effort. Deo gratias. Has not this column been...

Ill-judged Andrew Robson THERE IS a widely held belief that the best opening lead against a Grand Slam is a trump — on the theory that you want to lead as passively as...

LE OF st I! MALT SCOTCH VNISMI COMPETITION Horribul visiter Jaspistos IN COMPETITION NO. 1896 you were invited to provide a description, written by a nine-year-old to a...

A first prize of £25 and a bottle of Graham's Late Bottled Vinta g e 1988 Port for the first correct solution opened on 18 September, with two runners-up prizes of £15 (or, for...

Arc de triomphe Simon Barnes AS A palpitating Test series against West Indies ended at 2-2 with a drawn match and a whimper on a gelded pitch at the Oval last Monday, at...

Dear Mary. . . Q. I am a freelance journalist whose career has lapsed somewhat into the doldrums in the last year. I attribute this to the fact that I have not been going to...