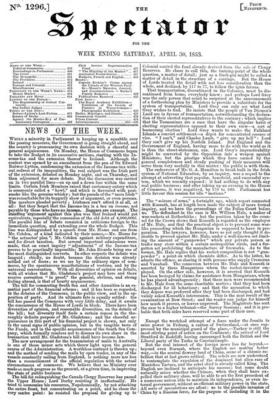 The "seizure of arms," a fortnight ago, which report connected

with Kossuth, has at length been made the subject of more formal inquiry, and we have the proceedings of the Police Court before us. The defendant in the ease is Mr. William...

Except the wretched attempt of a force under the Tesuits

to seize power in Friburg, a canton of Switzerland,—at once sup- pressed by the municipal guard of the place,—Turkey is still the most stirring point of action on the Continent;...

WHILE a minority in Parliament is keeping up a squabble over the passing measures, the Government is going straight ahead, and the country is pronouncing its own decision with...

THE QUEEN is again able to take open-air exercise. Early on Thursday morning she was churched in the private chapel of Buckingham Palace, and shortly afterwards walked in the...

Lord Palmerston received at his residence in Carlton Gardens, on. Monday, a deputation of working men, accompanied by the Reverend S. T. Bayley, Secretary of the Lord's Day...

The vacancy at Carlow occasioned by the death of Colonel Bruen, has been filled by Captain Bunbury ; who, on Monday, was elected without opposition. Within the last month no...

At a public meeting in Lincoln, on Monday, it was resolved to bring forward two candidates for the Northern Division at the next election, and to establish a North Lincolnshire...

FRANca.—Reports were freely circulated at the end of last week., that the Empress was in a delicate state of health. It was said that she had sustained serious injury from the...

SATURDAY. At the close of his last speech on the Jewish Disabilities Bill, Lord John Russell prepared us for the treatment which that measure received from the House of Lords...

Mario has reappeared at the Covent Garden Opera, both looking

and singing much better than he did during the whole of last season. On Tuesday he performed one of his best parts, Arturo in the Puritani. His welcome was—we must use the...

4Ithough Mr. Browning's dramatic poem of Colombe's Birthday was re- ceived at the Haymarket with all those outward marks of success which the theatrical world—credulous today,...

Of all the departments of histrionic art, that in which

we are least deficient is the department of low comedy,—as the names of Keeley, Buekstone, Compton, Harley, can testify. But Fortune now sends her coals to Newcastle, and we...

A meeting held in Dublin on Thursday, under the presidence

of the Lord Mayor, to oppose the extension of the Income-tax to Ireland, was very thinly attended. The Manchester Chamber of Commerce has passed a resolution disap- proving of...

STOCK RECHARGE, FRIDAY AFTERNOON. The for Money having only fluctuated between 100 1 and 100i_1. English Funds have shown great steadiness throu g hout the week ; The progress...

A telegraphic despatch from Paris, dated yesterday, reports the Em-

press as "no longer in danger from the accident which threatened her health : her Majesty's condition today was altogether satisfactory." The latest accounts from...

"The earth bath bubbles as the water has, And these

are of them," is a quotation that might be aptly used by any one whksaw the two new farces at the Lyceum, A.S.S. and Fast Train, High Pressure, Express. The old gentleman, who...

The reign of Mademoiselle Page at the St. James's terminates

this week. The ladylike style of her acting, and the effect which a remark- ably expressive countenance gives to her delineation of the softer emo- tions, have diffused a charm...

The most remarkable feature of the concert of the Harmonic

Union, (the new society in Exeter Hall conducted by Mr. Benedict,) on Monday, was Walter Scott's version of the celebrated German ballad "Lenora," set to music by Mr. Macfarren...

THE REGISTRARSHIP OF OXFORD 'UNIVERSITY. 28th April 1853. Sni—Tott sometimes complain of Oxford for her reactionary tendencies. The election that has occurred this week will...

BITLWEE, LYTTON'S LAST FICTION. NOTHUG can be more true than the general principle announced by the amendment nominally discussed by the House of Commons in Committee on the...

22d April 1853. Sin—In an article on the Indian Judges in last week's Spectator, you make use of the following language—" The charges against the two gentlemen first appeared in...

IN the present state of the law which regulates Parliamentary elections, those who have the most interest in the result, and who conduct the business with decorum and purity in...

MACIRTNEY Will prefer a very reasonable request to the House of Commons on Tuesday next ; but it would be quite as well if the matter were taken out of his hands by the...

WE have always upheld the doctrine that freedom is the one coun- teractive to absolutism of authority, whether temporal or spiritual ; and however like a truism the maxim may...

THERE is no presumption in saying that the Postmaster-General does not understand the principle upon which depends the revenue of the department that he administers ; but the...

THE eye of affection can discern beauty where the eye of indiffe- rence is not so clear-sighted. The French Budget, for example, which has, to our sight, features so ill-defined...

CAPTAIN ERSKINE'S CRUISE AMONG THE ISLANDS OF THE WESTERN PACIFIC. * ThE scene of Captain Erskine's cruise is those groups of islands and single islets in the Western Pacific...

MOORE'S MEMOIRS, JOURNAL, AND CORRESPONDENCE. * THE third and fourth volumes

of this biographical work carry on the poet's life from the middle of 1819 to the close of 1825; and are wholly made up of the journal which was commenced in the second volume....

"'T Is distance lends enchantment to the view," in a good many things besides hope. The reader who has been induced by a pass- ing notice of some alleged romance in real life to...

THE HOYA.L ACADEMY EXHIBITION. The Royal Academy held its private view yesterday. Reserving gene- ral as well as particular criticism till next week, we have only to say at...

Booxs. The Frontier Lands of the Christian and the Turk ; comprising Travels in the Regions of the Lower Danube in 1850 and 1851. By a British Resident of Twenty Years in the...

EXHIBITION OF THE SOCIETY OF PAINTERS IN WATER-COLOURS.

Our remark of last week as to the predominant mediocrity of art this year finds fresh confirmation, rather regretted than disappointing, in the Old Water-Colour Gallery. The...

An exhibition of some 250 choice framed specimens, British and foreign, and numerous others unframed, has been opened at the Photographic In- stitution, New Bond Street, in...

[Want of space has compelled the postponement of the Military

and Naval Gazettes till next week.]