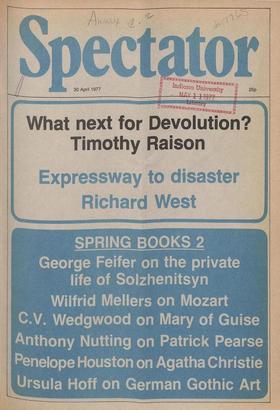 W , ith Mr Airey Neave's unveiling of a new Conservative policy on Northern Ireland — one that gives top Priority to security, even at the expense of political discussion — the...

Will Amin wreck the show? John Grigg The original idea was that this year's conference of Commonwealth leaders should be held in Zambia, because since the Singapore conference...

Someone really ought to warn members of the Royal Family to be more prudent before t hey use their prestige to appeal for public Charity, The Prince of Wales's request on i...

Scots hooligans and Chinese fanatics Auberon Waugh I have never been seriously inconvenienced by football hooligans. In fact, I am sorry to say, I rather enjoy watching them...

Energy Week that was

Nicholas von Hoffman Washington I 3 Y last Friday, the conclusion of what we might call Energy Week, our spearless leader looked almost as drained as a P u nctured gasoline...

David Levy Moscow 'What's the difference between Capitalism and Communism?' 'Under Capitalism, Man exploits Man. Under Communism, it's exactly the opposite.' 'What's the...

A Roman ecumenist Rome Although we approach the month of May, when all nature smiles and new things bud forth, there is no sign that this week's encounter of the heads of the...

What next for devolution?

Timothy Raison It is now clear that the Government, backed by the Liberals, are hoping before too long to get the devolution wagon back on the road. To push a Bill through...

Tony Craig It is a distressing commentary on the priorities of the National Union of Journalists that it could have left Ilkley, Yorkshire, at the end of its four-day annual...

Monetarists and Phase 3 Nicholas Davenport The endless economic wrangling between Friedmanite monetarists and Galbraithian managerialists, not to mention the neoKeynesians,...

Blushing me effrey Barnard I am in anatomical contortions and Or thopaedic agonies. When I hear them say and read them state, so far away from the event itself, that the Derby...

Sir: Like Patrick Cosgrave (16 April), I have enjoyed discussing the ideas of the 'new' Right with John Grigg over the lunch table. However, it is disappointing to see Grigg...

Sir: I find it a little surprising to see myself described by Mr Conrad Jameson (23 April) as a 'diehard' and 'last ditch defender' of the modern movement in architecture, if...

Sir: What on earth made George Gale write that disgusting article (23 April) about Dylan Thomas? There must be something about a real poet that upsets a certain kind of person....

Sir: I can assure Sir Oswald Mosley (23 April) that before tackling his wife's memoirs I took the trouble to re-read, no less than twice, his own interesting autobiography, My...

Sir: It is sad to read, almost daily, of the increase of school indiscipline, including savage attacks on male and female teachers, and on fellow pupils both in the classroom...

Sir: John Grigg's attack (16 April) on th e 'radical' Right is so confused in its logic 35 scarcely to merit comment, except that he represents an influential Conservati ve...

Sir: The Secretary of 'The Movemen t ft) : L o ndon' writes (2 April) from the adrireso of the British Roads Federation. Hen ee ' s t , i d doubt, his reference to 'roads being...

The truth about Solzhenitsyn

Wilfrid Mellers The Operas of Mozart William Mann (Cassell E15.00) One of the faculties peculiar to genius, as distinct from talent, seems to be that of knowing the right time...

C. V. Wedgwood Mary of Guise Rosalind Marshall (Collins E6.00) Mary of Guise, wife of James V, mother of Mary Queen of Scots and regent during the stormiest years of the...

The end of a dream

Peter Ackroyd The Autumn of the Patriarch Gabriel Garcia Marquez (Jonathan Cape £4.50) ,Marquez, despite a critical reputation hovering somewhere between Joyce and Nabokov, is...

Benny Green The Greet Prize Fight Alan Lloyd (Cassell £4.50) The title of Mr Lloyd's book means all things to all men. To my grandfather it would have conveyed an unlovely...

A sense of reality

Ursula Hoff Long ago I began my university studies by attending lectures on mediaeval architecture. Eager to see some of these buildings in reality after all the slides, I...

New eras John mcEwen Alistair Smith, Deputy Keeper in charge of the German pictures at the National Gallery and organiser of the exhibition Late k - lothic Art from Cologne...

Ted Whitehead Just Between Ourselves (Queen's Theatre) The Curse of the Starving Class (Royal Court) The typical sound of the post-war British drama is the sound of the family...

Diverting Rodney Miines L ina Lalandi's Rameau circus (part and Parcel, natch, of the English Bach Festival) Moved to the Royal Opera House this year, not altogether to its...

Holy gay Richard Ingrams It was bad luck on Jessica Mitford, the subject of an hour-long Lively Arts programme on Sunday, that her appearance came at a time When I, along, I...