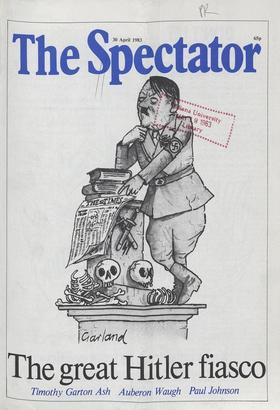 The case for Dr Owen

P eople are being unfair to the Liberal- SDP Alliance. Its decision to make Mr Jenkins its Prime Minister-in-waiting and Mr Steel its chief advocate at the election is perfectly...

Maggie May in June? Colin Welch 'N ow tell me Colin — when's the election to be?' This oft-asked ques- tion tends to bore, embarrass and irritate me. Embarrass, because I have...

I have just been to my first awards dinner and left it £500 the richer. My benevolent employer, Mr Algy Cluff, had entered me for the 'Editor of the Year' award Presented by the...

Joke of the decade Auberon Waugh I have often observed that those who live in the country can become obsessed by conspiracy theories. Few people in Somerset seem to doubt that...

The last lies of Hitler

Timothy Garton Ash Hamburg S uch a success for Adolf Hitler. How pleased he would be to read his 'diaries', even before their authenticity is proved. How he would laugh at the...

Richard West Dieppe T owards the end of 1967 or the beginning of 1968, I could not have prophesied that France, of all countries, was about to suffer a student revolt. The...

Sean Regan Sydney The truth is that if you want a well- governed state you must find for your future rulers some career they like better than government. (Plato, The Republic)...

Alan Ross T he temperature is 105 degrees, humidity 100 per cent. Between now and the monsoon in two months' time both will get worse. Power cuts remain lengthy and...

James Hughes-Onslow T hese are busy days at the Human Bioethics Centre at Monash University near Melbourne. Professor Peter Singer, the leader of this group, was in London last...

The Metropolitan District Railway Company have discovered that quarrell- ing with the House of Commons does not pay. They have a Bill in Parliament, and on Tuesday Mr Marriott...

Wilfred De'Ath C'Nn 12 April 1983, I entered Brize Norton V RAF base during a NATO tactical evaluation exercise intended to seal the sta- tion off from the outside world....

Fiihrer furore Paul Johnson H itler was so reluctant to commit him- self in writing, especially in his own h and, that the idea of him keeping a voluminous holograph diary...

Sir: Accusing the Oxford editor of Henry V of 'an elementary howler' in applying to Henry V the Prologue of Ben Jonson's Every Man in his Humour, A. L. Rowse commits a slightly...

Sir: Mr West should learn about the economic history of

France before pon- tificating about it (23 April). It is standing the truth on its head to say, as Richard West does, that France's economic expan- sion came because de Gaulle...

Crooks and the law

Sir: The abysmal Taki really should stick to gossip, or else be put out to grass. The only pleasing thing about his article on the Rothschild case in Corfu (23 April) is that...

Sir: P.J. Kavanagh asks 'Who was H.J. Massingham?' (Postscript, 23 April). He was a prolific author of the first half of this century, and son of H.W. Massingham, the great...

Sir: Your editorial about my poem ( 16 April) magnanimously professes to feel 'sorry for Mrs Raine and Miss Raine, and all the Raine family'. I should have thought that anyone...

It was stated last week in Paul Johnson's column that Christopher Ward, former editor of the Daily Express, was going back to work for the Daily Mirror. We have since learnt...

John Gross In the Service of the Peacock Throne Parviz C. Radji (Hamish Hamilton £12.50) T act, circumspection, restraint — the virtues of an ambassador are not nec- cessarily...

He gave us eyes to see them

A. N. Wilson A Hundred Years Ago: Britain in the 1880s in words and photographs Colin Ford and Brian Harrison (Allen Lane/Penguin Books £25) M rs Thatcher has been saying a...

Miranda Seymour man has been writing a supposedly sed- itious book about the controllers of his town while living in the house of a recently widowed woman. For this double...

Richard Ingrams In Character John Mortimer (Allen Lane £6.95) T he face on the cover is deceptive. Behind the thick spectacles the eyes look sleepy. When you meet him the im-...

The latest in country houses John Martin Robinson A few years ago I was taken to lunch at a 'new country house' in Wiltshire. It was a fine summer's day and we had drinks In...

Singular A. S. Henry I n every country except this one an ad- vanced musical education starts at thir- teen or so in a few good schools and is con- tinued in the academies,...

Stephen Dykes Bower Gavin Stamp P e 80th birthdays of architects are, per- imps, less remarkable than those of other luminaries. Architects, after all, often live to great...

Naughty, but nice Peter Ackroyd The Wicked Lady (`18', selected cinemas) y admit it, I like trash sometimes — .1. especially when it is not pretending to be anything else. The...

Trade names Taki New York M iss Koo Stark, who, wits claim, shows up nowadays at each and every open- ing, even that of an envelope, blew into town last week for the start of...

Richard In grams will be back next week.

Shadows P. J. Kavanagh onpreise women it were a shame, For a woman was thy dame: Our Blessed Lady bereth the name Of all women wher that they go. A woman is a worthy thing:...

Comeback Jeffrey Bernard T he comeback trail, as that unpreposs- essing would-be, Joe Bugner, could testify, is one hell of a slog pitted with pot- holes and boredom. I...

No. 1267: Utterly unexpected Set by Jaspistos: Extracts, please (max- imum 150 words), from the Fithrees diaries, assuming not only that they exist but that they contain...

Jaspistos reports: Competitors were asked for a poem giving a critical view of a na- tional daily, weekly or monthly newspaper. The American humorist Gelett Burgess did it long...

Roulette Raymond Keene T he way in which the deadlock between Smyslov and Htibner was eventually settled mirrored the indecisive nature of their entire struggle. After a...

rr he Times announced that 60 volumes of hitherto unknown diaries of Adolf Hitler, written between 1932 and 1945, had been discovered and would be serialised forthwith in its...