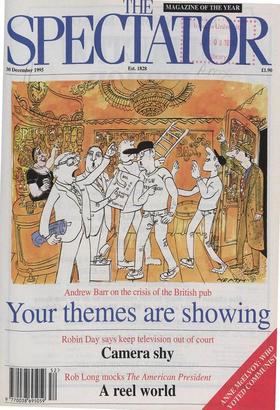 Its going to be our year. I can feel it.' T he Archbishop of Canterbury, in his Christmas sermon, said: 'I believe it is necessary to turn our backs on the quickie attitude to...

What Mr Major was about to do a couple of weeks ago; and why, unwisely, he didn't do it BRUCE ANDERSON I t is time to pay a tribute to Herr Helmut Kohl. It may be that his...

ALEXANDER CHANCELLOR I found that Christmas spent delightfully in innocent pursuits with the grandchildren had gravely weakened my immunity to humbug by the time the tabloid...

Take cover, as the non-commissioned officers take over AUBERON WAUGH He is plainly an eccentric character, pos- sibly a bit mad. His house adds nothing to the dignity of the...

PUBS THAT HAVE DESIGNS ON US

It's not pinball machines, it's not muzak; Andrew Barr on the new threat to the British way of drinking A GREAT deal has been written and spo- ken in the last few weeks about...

INJUSTICE SEEN TO BE DONE

A lifetime in television has not convinced Robin Day that cameras should be allowed in court IWAS THE earliest campaigner for tele- vising Parliament. It was 1959 and there...

persist. . . IS MAN a machine? Philosophers have argued over this for centuries, as philosophers will (it is their job, after all), but I have arrived at my own conclu- sion,...

WHERE THE CRUSADES LIVE ON

Nine hundred years later, Anton La Guardia finds an issue on which Arabs and Israelis unite Jerusalem IN A QUIET corner of Arab East Jerusalem, where Israeli building work has...

Passionately eager to prevail on humanity to achieve the colossal saving of time and space involved in writing words like bomb as born, Mr. Bernard Shaw manages somehow to pack...

LENIN WITHOUT THE TEARS

Anne McElvoy says we romanticise Russia's workers by brain; they're gentle bores who've now voted communist Moscow THERE WERE no doubts at Pravda about the significance of the...

IT IS FUNNY what they say on the wireless and television. I suppose there are two causes, which come from oppo- site directions. One is cliché, or formu- laic expression — as in...

WHY THE AMERICAN PRESIDENT IS UNREAL Rob Long offers an

The logical end of black racism is a return to Africa PAUL JOHNSON G overnment can and does perform all kinds of functions, but there are three tasks it must carry out because...

LETTERS Eclipse of the sun

Sir: At the time of year which has just passed I am always reminded of a religious figure who was first thought to have been born in a cave, discovered by shepherds who brought...

Sir: I feel I must protest against Auberon Waugh's cynical piece about President Clinton and the little Belfast girl (Another voice, 9 December). I wonder how he would feel if...

Sir: Can we have an end to the Nuremberg tic-tac of brief letters by persons apparently unaware of all the four counts at the trial, and of Goering's guilty verdict in all four,...

Sir: A worry about being Australian is that many of us were British a few generations back. Does this mean we might turn into a nation of football hooligans and serial killers?...

Sir: The analogy Frank Johnson makes with 1789 and today's Euro-sceptics (9 Decem- ber) is a shallow one and not worthy of his usual perceptiveness. In 1789 the French mob were...

Sir: It is a pity that Paul Bew's article (Don't mention the [second] world war', 2 December 1995) will reach only a limited number of American readers. Of course, America's...

explaining how the Duke of Norfolk knew the name Chan- cellor is one of the most deeply absorbing communications ever to have appeared in the pages of The Spectator. May we now,...

Sir: May I submit a belated, and perhaps irresponsible, footnote to Kevin Myers' article in your issue of 18 November (Dublin remembers too') concerning Ire- land and the second...

Sir: 'This week ' you say in your leader (16/23 December) more so than ever, it will be asked whether the problems submit- ted to Miss Killen are real.' What I have always...

The ascent of man

Sir: Miss von Bnlow (In defence of the American woman', 9 December) should not despair entirely. There remain a few of us American men who, despite having learned to change...

Sir: Alexander Chancellor (Diary, 9 December) reports the polite and helpful responses given to him by a variety of dukes. Suspicious and cynical readers may wonder whether this...

Sir: Could I use your pages to ask Alexander Chancellor

from one middle-class self- employed to another, how one gets a Diary in The Spectator? I seem to have all the required qualifications — except the scanner. Robert V Israel...

Inspired by a king

Sir: Pace Petronella Wyatt ('What's wrong with being unhappy?', 2 December), the expressed aspiration of the Princess of Wales `to be a queen in people's hearts' is not...

Now here he comes who came from almost nothing. He has to be the captain of no comment. No fault of his his car is made of something Pluto's made of, nor that this bad morning...

Happiness I pursue, of course, the same as you never netting it quite but figuring that's all right. What on earth would we do without it to pursue? Peter Kane Dufault

It is better to give than to be beheaded

John Grigg ROYAL BOUNTY by Frank Prochaska Yale, £19.95, pp. 330 A healthy by-product of the monar- chy's difficulties in recent years has been the sudden and escalating growth...

Look to your Bond Street

Charles Saumarez Smith SLEEPERS: IN SEARCH OF OLD MASTERS by Philip Mould Fourth Estate, £16.99, pp. 224 hilip Mould is a personable and highly successful dealer, who has made...

Andrew Barrow WOMEN IN THE BACKGROUND by Barry Humphries Heinemann, £14.99, pp. 327 his self-mocking and exceedingly funny novel describes the adventures and misfortunes of a...

Alan Judd THE FLOWER OF BATTLE by Hugh Cecil Secker, £25, pp. 415 I thought I knew the literature of the Great War reasonably well — at least, who wrote what even if I hadn't...

Give me less love and less disdain

Fiona Maddocks TCHAIKOVSKY by Anthony Holden Bantam, £18.99, pp. 490 T chaikovsky has long been on the wrong side of fashion. A few tucked-away areas of repertoire, such as the...

Love in the Glen Never having paraded their love in

the public sense of interlinking hands and exchanging kisses on the street but being private in their affections as in their lives now that they've grown older and some of their...

Who said what to whom when

Alan Watkins BREWER'S POLITICS: A PHRASE AND FABLE DICTIONARY edited by Nicholas Comfort Cassell, £20, pp. 693 I have half a shelf of dictionaries of quotation. Only one of...

Anita Brookner S elf scrutinyseemed to be the keynote to this season's French novels, since many authors — Biancotti, Boudard, Makine, Vassilakis — produced autobiographies...

`So much empty white space' Elizabeth Clegg visits the restored Trade Fair Palace in Prague I t is ironic that the Czech National Gallery, which saw its beginnings in the...

The final cut Mark Steyn W here are we now? Christmas Bank Holiday Thursday? Or, for those of a reli- gious bent, the first Friday before Sunday? As 1995 fades to black, I...

Seasonal cynicism James Delingpole C hristmas television just isn't as bad as it used to be. Blame, if you will, the decline of public respect for the monarchy; or the death...

Corrupted by 121 buttons Alan Judd I n the 'Motoring' column of 30 Septem- ber, I confessed to having never owned or even desired a BMW. There was perhaps a hint of smugness...

Taxing questions Robin Oakley T he Chancellor of the Exchequer, thank heaven, is one of those politicians conscious of human life outside Westmin- ster's precincts. He showed...

Five's the number Taki ne more year down the tubes, but what a year. Weddings, balls and parties galore, and riveting television provided by Mother Diana as she trashed the...

Ask a silly question .. . Jeffrey Bernard get a bit fed up with being telephoned by rich newspapers who want to fill up space by asking me silly questions about unimportant...

BRIDGE Play or defend? Andrew Robson A GROUP of keen bridge players can easi- ly be identified at a restaurant. It is never long before a bridge hand is scribbled on a paper...

f almill , What ever happened to our testicles?

LaInCJI1- IT HAS been an inventive year in the restaurants and kitchens of England. When some critic wished to give a chef the highest praise, 'inventive' was the word he...

Ups and downs Raymond Keene THE SPANISH grandmaster Miguel Illescas has qualified for the next stage of the world championship, known as the Interzonal, from the preliminary...

1241: Good company by Columba A first prize of £25 and a bottle of Graham's Late Bottled Vintage 19 89 Port for the first correct solution opened on 15 January, with t wo...

Dream horses Simon Barnes THE GREAT birthday of the year is upon us. On 1 January my three-year-old horse becomes a four-year-old. Also, by one of those Nostradaman...

Dear Mary.. . Q. Our daughter is engaged to a nice young man whose family think we are common. Their painful attempts to mask with polite- ness their efforts to train our...