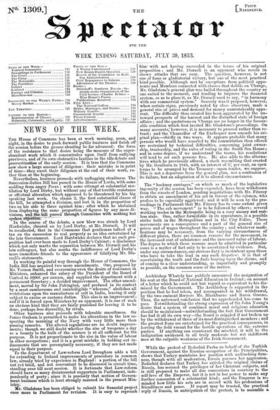 THE House of Commons has been at work morning, noon, and night, in the desire to push forward public business and finish off the session before the grouse-shooting be far...

Archbishop Whately has publicly announced the resignation of his seat

at the Board of National Education in Ireland ; on account of a letter which he could not but regard as equivalent to his dis- missal by the Government. The Archbishop is...

The "hackney carriages," on which so much of the legislative

ingenuity of the session has been expended, have been withdrawn from the streets of London, pending negotiations with Mr. Fitzroy to obtain an amendment of his act in favour of...

While the protest of Redschid Pasha on behalf of the

Turkish Government, against the Russian occupation of the Principalities, shows that Turkey maintains her position with unflinching firm- ness, though with all moderation,...

Camp life has been varied again by a pontoon operation, on a grander scale than before, on classical ground ; and also by some cover-fighting. The latter took place on...

Her Majesty's Ministers were entertained at the Mansionhouse by the Lord Mayor, on Saturday. They mustered in great strength; the chief absentee being Mr. Gladstone. Besides the...

TnE QUEEN appears to have gone through an extremely favourable course in her recent illness. The last bulletin, issued on Saturday, declared her convalescent ; and we now read...

A project has been set on foot to erect a Crystal Palace for Birming- ham and the Midland Counties, at Sutton Coldfield. At a meeting held at Birmingham on Monday, Mr. Samuel...

The Lord-Lieutenant departed from Dublin on Sunday evening for London. A few minutes before the steamer started, Lord Clancarty, Lord Castlemainc, and Lord Crofter, went on...

It is stated in an Edinburgh journal that Sir William Molesworth Las agreed to place the management of Holyrood Palace under Govern- ment control. Instead of "the present most...

FRANCE. —The Court of Cessation has annulled the judgment of the lower court in the affair of the foreign correspondents; declaring that the opening of letters, except under...

The Fifth Report of Mr. Cardwell's Committee, appointed to consider the principle of Amalgamation as applied to Railway or Railway and -Canal Bills, was issued early in the...

The cab-insurgents had not surrendered yesterday ; but the proposed

amendments had greatly mollified the proprietors, and signs were plenti- ful in the course of the day of a return to work. There was a great deal of meeting, and discussing, and...

The journals of the morning all speak of an arrangement,

originating With M. de Bruck, assented to by Austria, France, England, Prussia ' and the Porte, and forwarded to St. Petersburg on the 24th July, as akind of ultimatum. What it...

STOCK EXCHANOR, FRIDAY AFTERNOON. The English Funds during the early part of this week exhibited a great want of animation ; and until yesterday- afternoon Consols had only...

SATITILDAY. Some further discussion took place in the House of Commons yester- day, on Mr. Gladstone's South Sea resolutions ; but scarcely anything passed worth attention...

The despatches by the overland mail from India arrived yesterday.

They only repeat, with details, telegraphic despatches received early in the week ; and add a great deal of intelligence already received. With regard to Burmah, it appears that...

The Germans, to whom the theatrical chronicler now directs his exclu- sive regards—for the season is rapidly melting away—have had a down- fall and a rise within the last eight...

London, 25th July 1853. Stu—Humanity, represented by Honourable House, is of opinion that it has a right to.dietate the price of cabman's work. Whereupon Cabmanity shouts out,...

For the present, I would merely beg you to consider

whether the objects we seek, and the inconveniences we would avoid, may not both be met by some such arrangement as the following. Unite the whole of the educated classes, on...

Les Trois Sultanes, an old opera by Favart, written in 1761, when Marmontel's tale of Solyman II, on which it is founded, was in full vogue, and rendered illustrious by the...

REPRESENTATION OF CLASSES. Glasgow, 218t July 1863. Sea—I have read with interest the observations in your last week's num- ber regarding the Parliamentary representation of...

A WRONG UNREDRESSED. IF there is one trait of the times more alarming than another as a sign of national degeneracy, it is that disregard of justice which almost appears to be...

REPORT OF THE COMMITTEE ON RAILWAY ADMINISTRATION.

THE report just presented to Parliament by the Select Committee on Railway and Canal Bills will be distinguished amongst blue books for its masterly treatment of the subject....

WHILE the Danish Government appears to be taking steps which might, in certain not improbable events, precipitate the Russian succession to the throne of Denmark, references to...

THEORY and practice are curiously at odds in the City ; and, strangely enough, the practical men of that state stick to theory rather than to practice. The City needs a Sheriff,...

ADVENTURES OF THE THAMES.

Tereares-Reeoini appears to be threatened with a fatal immortality : it has already grown old, and still appears as far from reaching the bourne of blessing whence no traveller...

DEMIDOFF'S SOUTHERN RUSSIA.. THESE travels through Southern Russia, the Crimea, and what are now called "the Danubian Provinces "—Wallachia and Moldavia —were performed in...

THIS "story of the day" is a political novel, in which most of the public characters and the various political parties of the country are displayed to the reader. The dramatis...

SIMONDS ON THE ORGANIZATION OF THE CIVIL SERVICE. * IT is

said that, even in the days of good Queen Bess, Willoughby considered there was nothing left of the heroic for a man to do, but to discover the North-west passage ; in which...

NOT only are natural aptitude, fresh observation, some originality of thought, and careful cultivation, requisite to excel in any of the arts : a power which is known under...

Booxs. Castile and Andalucia. By Lady Louisa Tenison. A Summer's-Day Dream, with oilier Poems. By Henry Francis Robinson. Electra; a Story of Modern Times. By the Author of...

THE NATIONAL GALLERY. Four new pictures bang on the walls of the National Gallery. The most important is an Adoration of one of the three Kings, ascribed to Giorgione. Whether...

HEALTH OF LONDON DURING THE WEEK ENDING JULY 23.

On the 6th July, at Coburg, in Canada West, Lady Poore, of a son and heir. On the 10th, at Montreal, the Wife of Lieutenant-Colonel Hogarth, C.B., Twenty- sixth Cameronians, of...