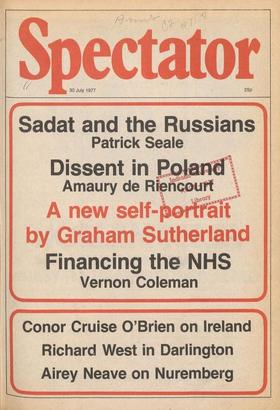 No nearer to Downing Street

Last week, Mrs Thatcher made a speech which had all the people who observe our parliamentary antics falling over themselves with delight. The critics of our democratic drama...

Honourable gentlemen Geoffrey Wheatcroft Is there a spectacle as ridiculous as the House of Commons in one of its periodic fits of collective self-pity? One might not. have...

Of all the shrines of the British trade union movement, the most agreeable must be the village of Tolpuddle in Dorset. It was here that in 1833 six farm labourers attempted to...

Perishing members Auberon Waugh The best news of last week was the demise of Jack Ashley's Bill giving the Crown the right to appeal against whatever it regarded as a lenient...

Dilip Niro Colombo The parallels between what happened in Sri Lanka last week, and in India four months earlier, are unmistakable. 'Mrs Sirimavo Bandaranaike and her son Anura...

Patrick Seale ,President Sadat has still not achieved hiss clear war aim of overthrowing Colonel Gaddafi, the dangerous opponent on his western flank. There can be no doubt...

Amaury de Riencourt Warsaw The Poles have always been known as the most dangerously volatile people in eastern Europe. They stayed independent and outspoken even during the...

David Bonavia Hong Kong The political wheel has come full circle in Peking, and even shows signs of' taking a good quarter-turn further. Broadcasts from the mainland suggest...

Richard West Next week the Darlington Northern Echo, one of this country's oldest newspapers, may fail to appear for the first time in its history, if the print unions back the...

Vernon Coleman Paradoxically, although most of the problems in the National Health Service would respond favourably to money, we do not need to spend more money on the health...

Ronald Payne I was idling through the morning papers when a small item leapt towards my atten tion. 'French police,' it said, always a promising opening, 'say that an abandoned...

The gathering storm Nicholas Davenport The FT index of industrial shares dropped 22 points last week described as an 'equity rout' and although there has been a technical...

Sir: Jonathan Benthall is to be congratulated for making the case so urgently for the retributive element in punishment (Spectator 16 July) We might agree till Doomsday about...

Sir: I have read Xan Smiley's piece on the Rhodesian atrocities (9 July) more than once, and still don't know what he is meaning to convey. He says 'the African concept of...

Sir: Richard Ingrams is that very rare phenomenon, someone who looks at (and writes about) television without astigmatic vision. At last (to cite the latest example) one has had...

Sir: Accuracy! George Gale is so wrong (The realistic Unions, 16 July). The Wilberforce Tribunal (not `committee') sat in February 1972, not 1974, towards the end Of the seven...

Sir: Your correspondent Dr J. Stanford Aston (Letters, 16 July) has misunderstood me. Of course there is a need to discuss in a biography the nature of a man's sexuality in...

Sir: It is curious to have, in the same issue of the Spectator (16 July), your contribut'or John Grigg advocating a statutory incomes policy, and your contributor George Gale...

Sir: On reading your issue of 16 July, I discovered that one of your contributors was a person called Waugh. I gather that this person is descended from an eminent author of...

Sir: In his excellent review of The Poisoned Life of Mrs Maybrick (16 July) Mr Patrick Cosgrave comments: `the book is topped off with a skilful study of the consequences of the...

Conor Cruise O'Brien Ireland: The Union and its Aftermath Oliver MacDonagh (Allen and Unwin £6.50) This is a revised and extended version of a book first published in 1967....

Pat Rogers Nabokov: His Life In Part Andrew Field (Hamish Hamilton E8.50) The real life of Vladimir Vladimirovich Nabokov would be a fine thing to contemplate, but the master...

Brian Inglis Guide to Medicinal Plants Paul Schauenberg and Ferdinand Paris (Luttorworth Press £5.95) I began by looking up 'Lettuce' — a curious choice, you may think, but...

Alex de Jonge The attempt to define what science fiction ought to be is a business best left to the science fiction conferences where they enjoy discussing that sort of thing....

Benny Green There Goes That Song Again Ed. Colin Walsh (Elm Tree Books) I wonder if people still amuse themselves by singing along to their own piano accompaniment? Judging...

Sutherland and the head-hunters Bryan Robertson There has never been such a time as the twentieth century for masks and evasions. With bombs, pesticides and fingers itching to...

Memorable Jan Murray Although it was not a continuous high, the American Ballet Theatre season at the Coliseum provided a week of thrills and revelations. We knew that the...

Hardy annual John McEwen The second part of fhe 'Hayward Annual' (Hayward Gallery till 4 September) is better than the first: the selection is better balanced, the standard of...

Sick at heart Richard Ingrams The telly, like the Sunday newspapers, is. obsessed by medicine and disease. This is not just apparent in the proliferating medical soap operas...

No crowing Jeffrey Bernard Well, it seems that I wasn't the only person who thought that Crow would win the big one last Saturday. Bets struck in the Ring just before the...