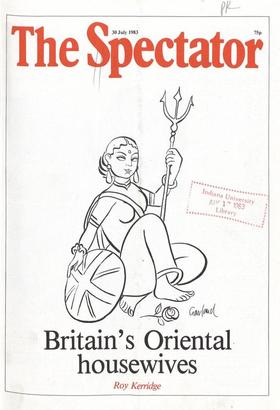 L ast week the Polish parliament cere- moniously lifted the curtain of martial law, to reveal a stage surrounded by police and a draconian set of new restrictions. The...

Labour in search of a prole Charles Moore E ven before Mr Hattersley swore (or, as 1–:/the case may have been, did not swear) at Mr Foot, the experts were agreed that Mr...

C lever Princess Michael of Kent seems to have a knack of getting her own way. After a five-year struggle, she has finally obtained the Vatican's approval for her marriage to...

Parliament of brigands Auberon Waugh N othing like enough anger has been gen- erated by the behaviour of MPs in awarding themselves a gigantic pay rise at a time of minimum...

Humming for His Holiness

Journalist who made bad

Denis Mack Smith D enito Mussolini did much more harm .1...)than good in his career as a politician, but he was an important figure and it is not altogether surprising that on...

John Derbyshire Siping City, China E verybody knows the frustration of having to explain a joke. Teaching the literature of one's country to foreign students is something...

Kissinger and the Right

Christopher Hitchens I f it's true that intellectuals are secretly fascinated by power, then there's no need for surprise at the renaissance of Dr Henry Kissinger. There are...

Probably one reason why the holiday- taking classes so often do not enjoy their holidays as much as they expected, is that they take with them no genuine holiday work, into...

Roy Kerridge Chez Kerridge', my current abode, is N—"in a little terraced street in London, where most of my neighbours are West In- dians. I have Jamaicans next door on one...

Richard West T Appleby-in- Westmorland he basic history of the town can be read on the souvenir dish-cloth I bought: 950 First Danish settlement 1179 Royal Charter granted...

Is the party over? David Freud A little more than a year ago the City stockbroking community was suffer- ing from a bad attack of the jitters. Business was slack and with...

Sir: Roy Kerridge's article on the Colin Roach affair (2 July) rested upon two repellent assumptions, both based on ignorance. Firstly, as a lecturer in a large London college...

As she is spoke

Sir: Our English language is an endangered species. We are so prejudiced against Romance words, and consequently so illiterate, that we cannot use the words 'reduce' and...

Sir: The sting in the tail of Brian Masters's extremely generous review of my book Elgar The Man: (16 July) perhaps deserves to be half extracted. In referring to Elgar's life...

Everybody's doing it Sir: From a confidential survey of over 3,000 women conducted this year in England by Dr Tony Baker, a member of the British Association for the Study of...

Sir: Paul Johnson (2 July) may be justified in taking a swipe at people who are snooty about advertising, but he confuses advertising with endorsement. If a man who is normally...

Sir: The author of 'that novel printed on loose pages for its readers to reshuffle' and whose name eludes Mary Renault (Letters, 23 July), was B. S. Johnson. Considering the...

Dictionary Johnson A. N. Wilson A lady, calling at Number 17, Gough Square one afternoon during the period when the great lexicographer was Compiling his dictionary, was...

George Gale French and Germans, Germans and French Richard Cobb (University Press of New England £10.95) H ere we have an odd and idiosyncratic book indeed: an account of...

This land of saints

Save buildings and save money

Intermezzos Rodney Milnes Griselda (Buxton, Festival) Love of Three Oranges (Glyndebourne) B uxton is not afraid of risks. The in- fluence of Boccaccio is a pleasing festival...

A palpable hit Peter Ackroyd Superman III ('PG', selected cinemas) T he difficult part, always, is recounting the plot and so for once we will leave that to the Warner...

Questions Richard Ingrams T he Irish psychiatrist Dr Anthony Clare has built up quite a reputation on radio as an interviewer who probes the parts that other interviewers...

Educational Taki L eonard Bernstein wants musicians all over the world to demonstrate for nuclear disarmament by wearing a red tour- niquet round their arms on 25 August, his...

Pattern and Patten P. J. Kavanagh W ith the customary heartlessness of youth — as the bruises accumulate we become more tender — I was amused, as well as touched, by the shock...

Life history Jeffrey Bernard news I had last week. I'm going to start writing a column again for the Sporting Life after an absence of 12 years. It won't make me rich but it...

My experience from Competition No 1 has made it clear that the positions set were dauntingly difficult. Accordingly, No 2, given below, is much easier to handle. Please write...

Solutions Raymond Keene T he positions set for analysis in the first Chequers Chess Competition on 18 June were these: The basic answers 1 had been hoping for were, for...

Report by Jaspistos: Competitors were ask- ed for an extract from a description of a sporting event by a correspondent badly af- flicted with stylistic floridity. The Wimbledon...

A prize of ten pounds will be awarded for the first correct solution opened on 15 August. Entries to: Crossword 618, The Spectator, 56 Doughty Street, London WCIN 2LL. 1 2...

Wine Club Auberon Waugh T he one disappointment of last month's offer was how few people took up the 1982 Pichon Longueville Baron at £65 the case ex-Bordeaux, for which I had...

THE COUSINHOOD by Chaim Bermant. W. B. Harbud, Peterhouse, Church St, Bexhill on sea, Sussex. THE RAPE OF RIGA, author unknown. Also any country title by John Moore except...