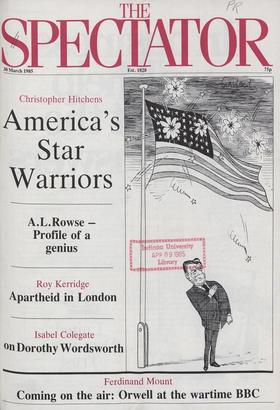 Portrait of the week A n American army major serving in

East Germany was shot by a Soviet sentry. Medical help was withheld from him while he died. President Reagan said the incident was tragic and unjustified, but added that he...

Who's boxed in? Charles Moore A s the Budget debate drew to its close on Monday, Mr Roy Jenkins praised Mr Edward Heath. Losing the Tory lead- ership might not have done much...

Death in the Soviet Zone

A t least the headline in the week's Mail on Sunday, 'Peace in Ireland?', had a question mark attached to it: when the present editor of that paper, Stuart Steven, was involved...

T he initials SDI stand for Strategic Defence Initiative, the proper name of President Reagan's 'Star Wars' plans. But they may also stand for 'Soviet Dream Idea'. This...

rr he Prince of Wales is becoming known for a slightly eccentric other- worldliness. He is said to be very interested in homeopathy and unusual diets. He is also, of course, a...

Next week's Spectator will go to press a day early,

in order to be on sale on Wednesday in London, and Maundy Thursday in the rest of the country.

Nothing needs doing Auberon Waugh A full-page advertisement, paid for by the Department of Health and Social Security, appeared in many newspapers on Sunday. It shows four...

A A fter a week in which two well- ■ -connected young men, the Marquess of Blandford and Lord Glenconner's eldest son, Charles Tennant, have appeared in court on charges...

All the world a bomb Christopher Hitchens We were at lunch one day, and I did almost all the listening. Congress had just voted to 'fund' the MX missile — designed to break...

Dry Duck on trial Brian Eads Hong Kong H enry Liu Yi-Liang, a Chinese- American writer and journalist, was shot to death in the garage of his home in Daly City, south of San...

Conference on Communism and Liberal Democracy

From Kensington bunker Timothy Garton Ash W ill you speak?' Mr A asked Mr B over a scrumptious breakfast at the Royal Garden Hotel. 'Yes, I'm going to talk about the impos-...

Vou're all fools and I'm not!' shouted .1. the infant Leslie Rowse, as he leant over the little banisters of the clayworker's cottage in Cornwall which was his child- hood home....

Andrew Brown The Den, Mil!wall N ationalism, in Orwell's sense, is a very powerful drug. It animates the most common form of football supporter as he yells encouragement to his...

The sound of the abeng

Roy Kerridge A n abeng is a conch shell or cow's horn, when blown into, emits a harsh, siren-like blast. In times past, the abeng was used as a warning system by runaway...

T he great City crash must be nearer than we think. Witness the exchange be- tween two of the City's most potent forces: one, just about its biggest wine-merchant; the other,...

D ear boy (says our most successful magazine publisher), printers are like girls. Love them, but don't let yourself marry them. The time will come when you need to give them a...

V igorous ante-post betting on the Coal Board Stakes suggest that the search is now on for Ian MacGregor's successor. Early favourite Sir Michael Edwardes is now drifting in the...

Putting on the Ritz

here is jam for the lawyers' tea at the 1 Ritz. They can thank the Al Fayed brothers, now taking over House of Fraser. The brothers already own the Ritz in Paris, and claim to...

T he bold gendarmes of the City like to run in the little boys who do no harm — it keeps up their arrest rate — but leave the serious villains safely on the opposite side of the...

Where's the alternative? Jock Bruce-Gardyne M ost noble Lords on Monday, I sus- pect, approached the maiden speech of the Lord Bishop of Durham rather in the mood in which la...

Whatever the state of negotiations with Russia, the British Government is obviously resolved to be prepared for the worst. On Thursday a Royal Mes- sage was read in both Houses,...

Sir: Hugh Trevor-Roper ('Wrong but romantic', 16 March) does not resolve the dilemma posed by Macpherson — either the man made up the lot out of his own head, in which case he...

Sir: I venture to correct Mark Pinkerton (Letters, 16 February) about John, the Catholic Bishop of Cork who became 22nd Lord Dunboyne in 1786. John was then no more than 56 (the...

Sir: Paul Johnson's claim that Australia and New Zealand 'have always been accus- tomed to getting defence on the cheap' by courtesy of Britain and the US (Pacific Cold War', 23...

Sir: During its passage through the Specta- tor's sub-editorial bowels the vitello tonna- to of last week's 'Imperative cooking' was changed into vitella tomato. I write not in...

Sir: I owe you and the readers of the Spectator an apology for the apparent illegibility of my handwriting that caused the mistakes (peculiarly blushmaking for someone so severe...

Authors and publishers Sir: I cannot allow Richard 01lard's some- what crotchety little bit of self-justification (Letters, 23 March) about the jacket copy of Philip Ziegler's...

Sir: Engineers are commemorated in West- minster Abbey, in most of the windows along the north side of the nave and north choir aisle ('Engineers' Corner', Books, 23 March). Why...

Sir: May I posit the alternative to 'Ange- lophir (Letters, 2 March)? A campaign for blue buses, yellow taxis and the whole- hearted acceptance of British Telecom's excellent...

The airman's fantasies Max Hastings The Right of the Line: The Royal Air Force in the European War 1939-45 John Terraine (Hodder 04.95) J ohn Terraine has built his...

Ferdinand Mount Orwell: The War Broadcasts Edited by W. J. West (Duckworth/BBC £12.50) 'I cr believe that the BBC, in spite of the believe of its foreign propaganda and the...

Six decades gone and one to come, In summer leaves I read, autumn. July foliage, winter form: Beech in leaf and barebones elm. I saw a salmon leap and fail, Fail and leap...

Christopher Hawtree had Auden's dog tags and Saint Christ- opher medal until 1975. The dog tags are now in the Humanities Research Cen- ter, the University of Texas,' observes...

Too good to be true

John Biggs-Davison John Hume: Statesman of the Troubles Barry White (Blackstaff £10.95, £5.95) T his is not a definitive biography. It is rather an essay in interim...

'Vegetable presences' — or so Strindberg would have them. I'd use a different term — but one they'd like no better, now I come to think of it. No wonder I'm celibate....

An American in Morocco

Francis King The Spider's House Paul Bowles (Peter Owen £10.95) T he cruellest misfortune that can befall a writer is to produce a first book so outstanding that no other book...

Empty passage Peter Ackroyd S ince David Lean's film claims merely to be 'based on the novel', there is very little reason for critics to object to the fact that it bears only...

Old old story Giles Auty David Bomberg (Fischer Fine Art till 12 April) Four Australian Artists (Crane Kalman till 13 April) A 'though neglected during much of his which ended...

Compelling Alexander Chancellor I don't know what it is about Roy .Plomley. Although he is perfectly fright- ful in every possible way, everything he does is utterly...

Ninepins Alice Thomas Ellis p eople keep falling ill. I think the stars must be .responsible. The moon is looking very peculiar at the moment too. We were standing on...

In the club Taki Gstaad T he Eagle Club was founded in 1957 by dissident members of the Corvigha Club who had decided to move over to Gstaad from St Moritz. I say dissident...

Immortal log P.J. Kavanagh L ast week the final paragraph of this column was somehow lopped off, lost in Gower Street. This is something that normally never happens at the...

No. 1365: Making a meal of it Set by Jaspistos: Writers on cookery can be quite as pretentious, long-winded or falsely lyrical as writers on wine. A recipe, please, with...

Jaspistos reports: Competitors were asked for a vernal poem in the manner of Hardy or Hopkins or Housman. The three Hs have all been gloriously mimicked and parodied before,...

Fide in extremis? Harry Golombek T he match for the world chess cham- pionship which ended in Moscow so disastrously and dishonourably for the reputation of both world...

T was sitting back in my armchair after 'watching the

first in the new series of The Wine Programme (Channel 4, Tues- days, 8.30) when a voice spoke from beside me. It was a light, dry, sparkling voice with a hint of acidity and a...

There is now a small charge of £1 per insertion (Max. 2 books). Cheques made payable to The S pectator. Please send details to Books Wanted, The Spectator, 56 Doughty St, London...

G oing out to restaurants is so expensive these days that

I'm surprised people ever think of going to places they don't know. So much safer to stick to old favourites where you know what you're getting and, presumably, know that you'll...