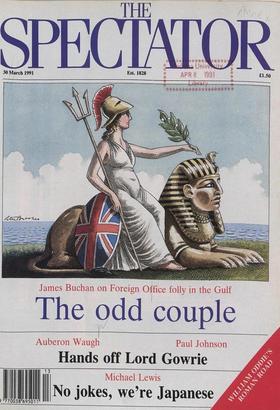 T he replacement for poll tax was announced by Mr Michael Heseltine, En- vironment Secretary, as a local tax based on the number of people occupying a house and its value. The...

If Mr Major listens for too long, he will not like what he hears NOEL MALCOLM W hen we came to office, Labour said the people could not be trusted. We trusted them. How right...

ALASTAIR FORBES Y ou can't win them all,' as they're always saying; and 'a prophet is not with- out honour save . . .' and all that. Save in his own family anyway. So while...

Oh dear, what can the matter be? AUBER ON WAUGH I had just finished my piece for this week's Spectator — quite a good piece, about the Way Ahead for People Like Us — and was...

WELL EDUCATED HEADS IN THE SAND . . .

James Buchan uncovers the error-strewn history of British diplomacy in the Arab world I FIRST wondered about British Arabists in 1978, when I went to take up a job in Jeddah,...

WE published recently some terrible instances of the cowardice of English crowds, and it is pleasant to notice how bravely men of the same race behave if they have but a little...

Ian Buruma also warns of dangers in trusting the sages of Orientalism SOMEWHERE — I honestly forget where — I read the following criticism of Presi- dent George Bush. Before...

NEITHER BORROWER NOR LENDER

Sandra Barwick is worried that Labour could destroy the reviving rental market I HAVE a friend who lives in a house owned by a family trust in Holland Park. Her grandfather...

persist . . . IT ISN'T only in Colombia that there's a drug war going on: there's one in our hospital, and in its own way it also is having serious effects. For example, in the...

THE TROUBLE WITH POPING

William Oddie is puzzled by the C of E's reaction to his conversion to Rome I FIRST thought there might be a bit of a fuss about my becoming a Catholic when the priest...

The press: Paul Johnson deplores the onward march of humbug and the invasion of privacy DESPITE various cosmetic attempts to powder over the dirty face of the British media —...

A reader received the following letter from the Economist: WE HAVE received your request to change the addressing of your subscrip- tion to THE ECONOMIST. Your change of...

NOW that Mr Justice Cocklecarrot has hung up his wig, we have to get our laughs from the run of the mill Law Reports, and I must say that they approach Beachcomer standards....

I CONGRATULATE Nicholas Jones, the bids-and-deals maestro of Lazards, who is to be chairman of the National Stud. In accordance with modern boardroom prac- tice, his appointment...

BEWARE of the baker of Swiss rolls who says that his corporate treasury is a profit centre. A bank might as well seek to boost its profits by baking Swiss rolls. Allied Lyons...

A mouthful of dust

MICHAEL Heseltine, Norman Lamont and I are all stuck behind the same corporation dustcart. I saw it the other day in Manchester, bearing the municipal liv- ery with a new...

Itchy directors and institutional sheep, lemmings, and elephants in mangers CHRISTOPHER FILDES D irectors, so a merchant banker ex- plains, get bored with managing their...

Sir: Sandra Barwick's article (When the boys come home', 2 March) on the prob- lems facing ex-servicemen cannot go un- challenged. Although it finishes with a laudable plea to...

Sir: Professor J. B. Kelly's account (Tees not leave it to the Arabs', 16 March) of Britain's part, as mandatory power, in drawing up the frontiers of Iraq, reminds me that some...

Sir: In his letter of 16 March, Roy Miles refers to Canova's Three Graces which may be seen at the Hermitage Museum. I have visited Leningrad and studied this work on half a...

Sir: The admirable activities and record of the Thomas Coram Foundation listed in Colin Masters's letter (23 February) have been badly served by the repercussions, locally and...

Sir: Frederic Raphael's condescending dis- missal of A Sense Of Belonging (Books, 16 March) contains a curious misreading of our book. We neither advocate 'a return to Jewish...

Sir: I've been trying to trace the origin of `between two stools'. What stools? I find it in no book of quotations, sayings, folk terms, proverbs or etymologies. Did the...

Sir: Craig Brown doesn't think Anglicans take christenings seriously (Diary, 16 February). I've no doubt he put all thoughts of salty-sand and high-speed work out of his mind at...

Sir: For the past six years The Spectator has declined to publish any letter, article or poem I have sent to it. Obviously this will not have been because they have been thought...

Sir: I very much enjoyed Digby Ander- son's article on mail-order food (26 Janu- ary) in which he proved by Mr Waugh's example that one need not refrain from buying by mail...

Frederic Raphael NAKED HOLLYWOOD by Nicolas Kent BBC, £15.95, pp.256 T wo key words in the title, guys, how can we go wrong? And a major television series to push on the open...

Giving the story a helping hand

Charles Maclean THE MUSIC OF CHANCE by Paul Auster Faber, £13.99, pp.217 A ny novel that solemnly alerts the reader to the role of luck in the story about to unfold is likely...

Anita Brookner AIR AND ANGELS by Susan Hill Sinclair-Stevenson, f13.95, pp. 276 A clergyman in his mid fifties and a girl of 15. It sounds unpromising, and in many ways it is,...

In defence of a distinctive British culture

Michael Bentley THE LESSONS OF HISTORY by Michael Howard OUP, £17.50, pp. 217 W ith the tanks and oil-wells still blaz- ing in the desert, Sir Michael Howard could hardly have...

To encounter a God is not everyone's thing. But you don't get asked. There he stands in the sunken road, goat-eyed, the ocean on his horns... And suddenly the wind drops....

Cuts by Labour, reforms from the Tories

David Willetts THE STATE OF WELFARE: THE WELFARE STATE IN BRITAIN SINCE 1974 edited by John Hills Clarendon Press, £40, pp.412 I n the public sector you get more money by...

Richard Lamb HAIG'S COMMAND: A REASSESSMENT by Denis Winter Viking, f18.99, pp.362 T his well researched and important book brings to life the polemics and con- troversies of a...

Signs of the Times

Three years he did the tour. A coterie Of hopefuls, fans and groupies went along Down dusty paths, beside a tideless sea, And just before the last, still going strong, Crowds...

The girl of the golden West Indies

William Scammell MIKHAIL BULGAKOV: A CRITICAL BIOGRAPHY by Lesley Milne CUP, £35, pp.324 I t is almost a full-time job trying to keep up with the great Russian writers of this...

Robert Blake HARRIET MARTINEAU: SELECTED LETTERS edited by Valerie Sanders OUP, £30, pp.302 his is a selective collection of 100 or so letters by that celebrated 'miscellaneous...

In There Every now and then one of them Doesn't

come down to claim Her usual chair. It's all dealt with quietly And Matron is smiling. The rest of them try and think Who it was that sat there yesterday. You don't ask...

Theatre 1 The pit and the snare O nly a year ago, Czechoslovakia's actors were being feted as the heroes of the `velvet revolution'. This month, actors at Prague's E.F. Burian...

The death of opera

Rupert Christiansen T he premiere of The Death of Kling- hoffer in Brussels last week was a tense and undiverting occasion, a sort of operatic summit conference. No glamour, no...

Hamlet (Bristol Old Vic) Power play Christopher Edwards T his is an excellent production of Hamlet from the Bristol Old Vic, under the direction of Paul Unwin. The director...

Carlton House: The Past Glories of George IV's Palace (The Queen's Gallery, till 11 January 1992) Princely prodigality Ruth Guilding T he climate of opinion has changed since...

Cabin fever Taki Athens h ishis is the time of year when the Greek countryside looks its best. I took the boat out and steamed around Cape Sounion down to Paros and all those...

Harmless roguery Martyn Harris T here are now at least two antique shops in north London called Lovejoy's, which only goes to prove the programme's penetration of the...

Backroom baby Zenga Longmore A nong the many new words and phrases now being picked up by Omalara day by day is `backroom leaner'. This, of course, means 'vacuum cleaner'. Yet...

Bum rap Jeffrey Bernard T he course of high-powered vitamin injections I am having has yet to show any improvement to my failing eyesight. It is early days still but I wish I...

Langham Hilton MUCH as it pains me to admit it, there are some things (motorways, television quiz shows, toothpaste) that the Americans do better than us. Americans have always...

Just a lark Jaspistos c AINIAS REGA L 12 YEAR OLD SCOTCH WHISKY I n Competition No. 1669 you were in- vited to apply a nonsensical or light- hearted treatment to a given...

Never be old Raymond Keene t his week I want to recall a most promising young player, Ian Wells, who almost ten years ago died in a tragic accident. Ian was one of the...

Rupert Brooke wrote a sonnet describing a ghastly railway journey, which begins, 'Opposite me. . .' You are invited to do the same. Entries to 'Competition No. 1672' by 12 April.

Last week's solution was of No. 998: Sales-talk. The unclued

lights were sails. by the 'Post-a-Book' service. Dictionary prizes are sent out

Jungle cricket Frank Keating AUSTRALIA have just finished a Test match at the beguilingly ramshackle Bour- da ground in Georgetown, Guyana, which is more than we did ten years...