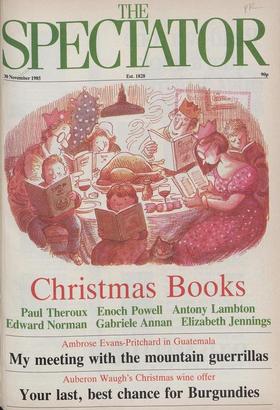 'To a social security office in the UK!' l ye Arabs hijacked an Egyptian airlin- er on a flight from Athens to Cairo; the security men on board resisted, and in the ensuing gun...

NEIL Kinnock accuses Militant of impos- sibilism'; and it is an accepted Trotskyist tactic to raise workers' expectations to dizzying heights in the hope that their subsequent...

HER IRISH DREAM B oth Mrs Thatcher and Mr Kinnock began their speeches on Tuesday, at the start of the debate in the Commons on the Anglo-Irish agreement, by deploring vio-...

THE human cost of the Egyptian comman- do operation to liberate the hijacked EgyptAir plane at Valetta was appallingly high. Even in Washington, the death toll of 60 has caused...

The Labour leader and the little bleeder FERDINAND MOUNT H atton is apparently an Old English surname meaning 'place on a heath'. And, for all I know, Mr Derek Hatton may be...

GEBLER DAVIES h is is writ upon the fairest pair of bubbies you ever did see.' John Wilkes scratched this greeting as the commence- ment of a letter to a friend who was the son...

A plea for lords, ladies and baronesses who are disabled AUBERON WAUGH S o I, too, was had for a mug. Liverpool is not going to prove the battlefield for a domestic Armageddon...

IN THE GUERRILLAS' MOUNTAIN HIDEOUT

Ambrose Evans-Pritchard is one of the first journalists to visit the Guatemalan Indian guerrillas, fighting since 1961 Volcan Atitlan, Guatemala GUATEMALA is a wonderful...

Timothy Garton Ash on the Soviet leader's concern for traditional Russian interests Geneva HE is extraordinary. Even through the television screen he positively nails you down...

Ronald Payne and Gary Busch on a new alignment of miners dominated by the Eastern bloc FOREIGN affairs may not loom amazingly high among the priorities of Roy Lynk, general...

On the 21st inst., Mr Parnell sanc- tioned a furious manifesto, signed by the Council of the Irish Nationalists of Great Britain, calling upon all his coun- trymen in England...

Richard West suggests a better candidate than Belfast for joint Anglo-Irish rule BOTH the two main problems now facing these islands could quickly be solved if the politicians...

Outsiders: a profile of Rupert Sheldrake, alternative biologist THE burning of books is usually self- defeating. When, in 1981, an editorial in Nature described A New Science...

The press: Paul Johnson on three Fleet Street groups in trouble THERE is such a flood of news coming out of Fleet Street at the moment that the public is understandably a...

Another message from the sandwich-men JOCK BRUCE-GARDYNE any years ago I was approached by a farming constituent of mine with a problem. Five and a half years before he had...

When tin-pot governments welsh on their debts like tin-pot companies CHRIS TOPHER FILD ES M etal fatigue has spread from the modest home of the London tin market to become an...

LORD Williams, the former banker now on the Labour benches, chose this week to hearten the defaulters by proposing an alternative scapegoat. He asked the Gov- ernment for an...

WONDER what has become of the two canvas chairs. We used to see such a lot of them earlier this year, when Burton was trying to take over Debenhams. The chairs were dreamed up...

OH FOR a Lytton Strachey to chronicle Lloyd's of London! After Eminent Victo- rians, Noteworthy Citizens? He found a phrase to describe Oxford's parting with John Henry Newman...

he first three winners in the nine-week Spectator Game of Consequences will receive outstanding prizes. The first prize is a valuable 18th-century aquatint of India engraved by...

Sir: Andrew Gimson's article on women priests in your current number (23 Novem- ber) is rather more predictable than perceptive. It shows little awareness of the fact that...

Sir: The muddleheaded writers of the `Kairos document' (Leading article, 2 November) probably do not read the Spec- tator; still, let it be said that from the theological point...

Sir: Your reviewer Eric Christiansen (Books, 12 October) clearly enjoys having fun at the expense of authors; but he goes further than this in reviewing my Restless Bones: The...

Sir: A. N. Wilson's article on death (The facts of death', 2 November) was rather depressing: may I tell you of one death (since it had to be) not so: I was secretary and...

Sir: Regarding a letter in last week's Spectator accusing me of plagiarism. As in everything Hitchens writes or says, he is being less than honest in producing a sentence that...

Sir: Alexander Chancellor's pronounce- ment on cuff buttons (Television, 16 November) seems to be a large generalisa- tion from Sir Anthony Eden. The rule surely is (it...

SUBSCRIPTION RATES TO GO UP ON 1 DECEMBER Post your subscription before 1 December and save up to 25% on the retail price (equivalent to 3 months FREE) I enclose my cheque for...

Sir: I have read your profile on Sir Terence Conran (16 November), To me it seems an excellent study in resentful envy. As you kindly pointed out I was around for some nine...

Decimal points Sir: Two omissions and one surprising error in

Kingsley Amis's A to Z (`Sod the public', 19 October). Our coinage was not altered to decimal but to centesimal. Apart from some near-eastern countries which have millesimal...

Philip Ziegler's Mountbatten remains for me the most pleasing book of the year. Ziegler defied the expectations of all those who thought sycophancy unavoidable in an official...

This year saw the republication of Aldous Huxley's travel notes of the East, Jesting Pilate: The Diary of a Journey (Paladin, Â£2.50), originally produced in 1926. A large part...

Best books: Vincent by himself, edited by Bruce Ber- nard, designed by Derek Birdsall. A bril- liant and unprecedented synthesis of Van Gogh's pictures and letters. The Bayeux...

Books of the Year A selection of the best and most overrated books of the year chosen by some of the Spectator's regular reviewers. John Keegan I tremendously enjoyed...

I most enjoyed two dissimilar books by similar historians, Gwyn A. Williams's When Was Wales? (Black Raven Press) and Richard Cobb's People and Places. Professor Williams is...

For once I am in no doubt as to the 'best' book of the year â for me. It is Easing the Passing by Patrick Devlin. I have always been a murder-trial addict and the second half...

Best books: Peter Vansittart's autobiographical memoir, Paths from a White Horse, which is a beautiful description of the author's lifelong love affair with words. Ben Pim-...

Noel Malcolm I am usually too busy reading old books

to manage very many new ones. None of my choices, therefore, is altogether new. The first is an obvious one: Geoffrey Hill's Collected Poems, newly assembled by Pen- guin. Some...

It may seem whimsical or twee to say so, but I honestly do not think I have enjoyed any book this year so much as A Turbulent Decade: The Diaries of Auberon Waugh 1976-1985. All...

The two best novels that I read this past year were Jane Gardam's Crusoe's Daugh- ter and Brian Moore's Black Robe. I feel no surprise that neither appeared on the Booker...

Peter Reading's Ukulele Music (Seeker & Warburg) is unlike anything else. He takes, for the most part, horrible bits of experience (granny-bashings, and so on) and makes poems...

The truth of the gospels

Antony Lambton THE LETTERS OF ANN FLEMING edited by Mark Amory Collins, Â£16.50 I cannot help thinking it is a pity Ann Fleming should have wished to have such a large...

Jan Morris DYLAN THOMAS: THE COLLECTED LETTERS edited by Paul Ferris Dent, Â£20 T hree things, in particular, Dylan Tho- mas was: a slob, a Welshman, and a great poet. How...

Notes from an original mind

Paul Theroux THE HUMAN PROVINCE by Elias Canetti Deutsch, Â£9.95 T he oddest aspect of Elias Canetti's winning the Nobel Prize in 1980 was not the fact that he had written...

As expected, only more so

Gabriele Annan SELECTED LETTERS OF CH ARLES DICKENS Edited and arranged by David Paroissien Macmillan, Â£25 is bilious system is so utterly over- thrown, that a small ball of...

Eric Christiansen MASTERLESS MEN: THE VAGRANCY PROBLEM IN ENGLAND 1560-1640 by A.L. Beier Methuen, Â£19.95 A ccording to everyone who knows, we are being eaten alive by...

Vacant Possession Now that it's over there is just a

text Of which I am the book, in which the past Enjoys the only presence that it has. I carry still upon my inner skin Annual incisions showing the boy's height, A fading patch...

Music Toast to Tallis Peter Phillips L ast Saturday (23 November) was, for me, the Big Day. Here was the only opportunity I shall probably ever have to celebrate the...

Plenty ('15', selected cinemas) Plenty of nothing Peter Ackroyd C uriously for a film concerned with the decline of contemporary Britain, Plenty has been fashioned around an...

King Lear (Almeida) Over- Christopher Edwards T his production of King Lear is by Deborah Warner's enterprising company, Kick. The evening may appeal to those with a taste...

Peaks and troughs Ursula Buchan S uch is the perversity of human nature, that most people, if set down to garden on a healthy moor, will conceive a passionate and unquenchable...

Fearful summitry Noel Malcolm I know I should have felt nothing but sympathy for Brian Redhead in Geneva last week, as he sat huddled over the Primus stove in his radio...

All that glitters Peter Levi T he Geneva summit has melted away into the mist now, having established, if that was needed, that there are only two world leaders who count. At...

CafÃ© royal Taki I New York often wrote about Mortimer's, the brick-lined, dark-panelled restaurant that looks like the inside of a fireplace and is known as the in place of...

Seasonal gloom Alice Thomas Ellis T he prospect of Christmas is really getting me down now. Should we stay in London or go the country? Beef or turkey? What do men want in the...

Atlantic crossing Jeffrey Bernard F rom what little I could see of Boston last week, in the three days and two nights I was there, I would say that it is the most livable-in...

All for Jove P. J. Kavanagh e are shown to our places by black- dressed stewards, male and female, with silver insignia round their necks on broad ribbons. We wait, in that...

Northern star Paul Lamford ith Nigel Short having recently taken on the world's best in the Candi- dates' Tournament in Montpellier, it is Opportune to speculate on which...

Henry on Henry Jaspistos I n Competition No. 1397 you were asked to imagine the impression, recorded in a letter to a close friend, made on Henry James by Henry Miller, or...

People have often described their personal ideas of heaven, but less often of hell. You are invited to do this in prose or verse (maximum 150 words or 16 lines). Entries to...

Burgundy golden oldies Auberon Waugh or my last offer of the year I have been routing around among the less prestigious vintages of the last decade, 1973, 1974 and 1977, in...