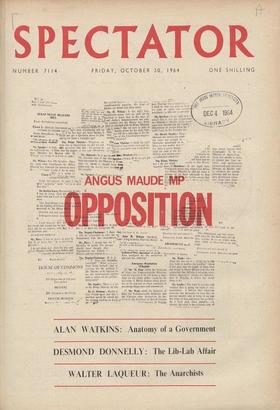 The Need for Incentives

HOOT first and ask questions afterwards Oseems to have been the Government's motto when it introduced this week's economic measures. The 15 per cent tem- porary charge on...

—Portrait of the Week— ONLY EIGHTY-SIX DAYS 'LEFT of the

'100 days of dynamic action,' and Mr. Wilson set about getting the economy moving by throwing a protective Wall around British industry. Messrs. Brown and Callaghan jointly...

SARAH GAINHAM writes from Bonn: The Germans have something of a bad con- science about the way they have been dragging their feet over the agricultural Common Market, even...

Rebellion or Brinksmanship? Leo BARON writes from Bulawayo: The Rhodesian public is now firmly convinced that Mr. Smith intends to take unilateral action. The meeting of...

HARRY FRANKLIN writes from Lusaka: The Union Jack came down at midnight and in moonlight as the stadium lights flicked off. Its descent was watched in silent sadness by the...

Anatomy of a Government By ALAN WATKINS N ow that the dust has settled in Whitehall, and we have been harrowed by stories of the Queen's Ministers sharing telephones and...

By J. W. M. THOMPSON ISMISSED like a pregnant parlourmaid': such was the disgruntled remark attributed, at the time of Mr. Macmillan's great Cabinet purge of July 1962, to Dr....

By DESMOND DONNELLY, MP ORD MACAULAY, referring to the defeat of the Tory Government in November 1830, said: 'Dark and terrible beyond any season within my remembrance of...

The End for the Lords? By R. A. CLINE HERE has been so much talk recently about 'T 1, law reform that Lord Gardiner had to administer a little sedation tos the Magistrates...

Twopence Coloured By R ANDOLPH S. CHURCHILL Co the Weekend Telegraph has at length come tato terms with the newsagents. Instead of id. from the paper and id. for delivery it...

And By Opposing End Them?

By ANGUS MAUDE, MP TT has been widely observed that Mr. Wilson's is a singularly inexperienced Government. It has not so far been remarked that, by the same token, the...

'He spoke with a certain what-is-it in his voice and I could see that, if not actually disgruntled, he was far from being gruntled.' So wrote the sage himself in The Code of the...

Frost Down Under Our young satirists can count themselves lucky

that they practise here and not in Australia. In a recent case which has received no attention in Britain three young men in their early twenties were sent to gaol for...

Frontier on the Zambezi We seem very close now to

a disastrous situa- tion in Rhodesia. While Zambia rolled smoothly towards her independence, Ian Smith was present- ing his charade of chiefs to an unimpressed world. It was...

From CHRISTOPHER HOLLIS A s I have already written, I do not pretend, from a fortnight's experience confined to New England, New York and now Kentucky (where I write), to be...

'WILSON'S SURPRISE,' said the Daily Mail head- line, reasonably enough, over the news of Mr. Alun Gwynne-Jones's translation from defence correspondent of The Times to Minister...

By JOHN VAIZEY N OT since the great reports of Victorian times has a commission published so much of the calculations which underlie its recommendations as the Robbins...

Sad Mortality We are all of us mortal, and it

is unlikely that the efforts even of the Minister for Technology will change that situation in the immediate future. This thought has prompted an actuary, who normally spends...

We've lived this golden Autumn through and seen Our Politicians sweating every night To prove their own soft soap more white than white. We've viewed techniques upon the Silver...

SiR,—Frank Byers should not be too anxious to condemn a system which puts nine of his friends in the House although they polled on average a mere 11,618 votes apiece. This is...

Sta,—Has Mr. Frank Byers already forgotten that it was his

SIR, — Mr. Frank Byers writes: 'We may well look forward to a steady decline of Conservative rep- resentation in this country over many years—the nation going forward with more...

Byers criticises our poll because forty (in fact the real number was thirty-seven) of the constituencies in our sample of one hundred contained no Liberal candidate. As our...

Sta,—Mr. Desmond Donnelly, in his article 'A Search for a

New Party'?' in the Spectator, sup- ported in the Birmingham Planet by his colleague Woodrow Wyatt, re-ignites the old controversy about a permanent Lib-Lab pact. Mr. Donnelly...

Sit,—The whole horror of the minor literary racket oozes out

of Mr. Edward Lucie-Smith's rude evading of the serious statement made by Mr. Douglas Hill. if poets are no longer allowed to use language figuratively, many ideas will be con-...

SIR,—Perhaps it is churlish, after so long an interval and all the pleasure he has given us. to remind Mr. Alan Brien that it was Polonius, not Hamlet, who was accounted a good...

English Electric Leo-Marconi com- puter has failed to cater for. is the considerable in- crease in Liberal votes coming from people, like myself, who voted for the first time in...

S112,—M r. Hill is right, of course. Poetry is an in- dividual not a group activity. The fact that certain poets with strong individual voices attend the meet- ings of a...

Smith, replying to my letter about the Group, has quietly avoided any reference to Philip Hobsbaum's definition of the Group as 'a seminar in creative writing.' Yet it was the...

TOWARDS THE GREAT SECRET

Sts,—In his notice of D. H. Lawrence's Complete Poems, Stephen Potter takes time off for a custom- ary 'reviewmanship' side-swipe at my father. Referring to the poem 'A man...

that the Tory Party must show itself more clearly in sympathy with something you call 'the new middle class.' Although this expression is frequently used in left-wing Tory...

SIR,—'Mr. Wilson may also be able to announce a Minister responsible for sport, arts and the youth service.'—The Times, October 20. I know the poor fellow's been fairly hard...

BELFAST RIOTS SIR,—May I be permitted to add a few

comments on Mr. Robinson's letter concerning the Belfast riots. First, that the police acted with a dubious ex- pediency, prompted by an ecclesiastical Goldwater, when they...

SECRET BALLOT SIR,—Your correspondents who are puzzled by the way

voters are identified and ballot papers are marked in polling stations will find the relevant legal pro- visions in the 'Parliamentary Elections Rules,' which are contained in...

THE FREUDIAN SCHISM SIR,—Why should there be any controversy about

the medical qualifications of the psychoanalysts Melanie Klein and Dr. Segal? If one is to treat prob- lems of psychological origin, a knowledge of basic physiology is useful...

SIR,—Hundreds of bishops, thousands of parsons and numerous earnest laymen like me will thank you for Professor Anthony Flew's review of Body and Mind, a book we must obviously...

I am an assistant male nurse and the first part of the letter amused me. Mind you, I never gave it a thought that my nursing experience would stand me in good stead if, and...

I CANNOT imagine what it was like . for Whitehall civil servants, but it's been a busy week for London ballet critics. With Festival Ballet at Wimbledon and Western Theatre...

CHARLES REID B y Since the performance was typical Klemperer and as like half a dozen earlier ones as peas out of the same pod, little more need be said than that by this time...

Don't Let Summer Come. (Mermaid.) — A Cuckoo in the Nest, (Royal Court.) Now this is an interesting development, for the present farce movement exists on two f ronts. On the one...

THE Brazilians are said to_ travel with a staff psychia- trist whose attentions, one gathers, are confined to in- dividual psychology. There is group psychology too: an...

Visionaries v WALTER LAQUEUR F OR a long time the anarchist was the man with the bomb. `Where are your bombs? Why don't you blow up the school?' an exasperated headmaster of...

FORMER members of the editorial staff of the Spectator, a fairly substantial socio-economic group, can be classified into two main sub-groups ---those who have worked for the...

Science and the Shabby Curate of Poetry. BY Martin Green. (Longmans, 25s.) IN A Mirror for Anglo-Saxons, Martin Green, a product of the English school at Cambridge, wrote from...

Birth of a Shark. By David Wevill. (Macmillan, 18s.) PERHAPS the most dangerous gift for a poet is to be over-clever. This is not to disparage either technical aptipde or...

Song for an Attempted Suicide

Tell yourself you are equal, Tell yourself till you die • That the attempt you made was not lethal, And do not live a lie. Love you have found conies deeper From friend and...

Ir is astonishing how anyone with Robert Penn Warren's serious reputation could have written such a pulpy novel as Flood. Mr. Warren, after all, is the author of All the King's...

P UBLISHED in 1944, Trevelyan's English Social Iiistory had sold 392,000 copies by 1949. No history book had sold so many copies in so short a time: indeed, the public response...

The First Salvo By NICHOLAS DAVENPORT ONE'S mind goes back to 1951, when the last Labour Government was driven out of office on a balance of payments crisis. The measures which...

By CUSTOS I HE Stock Exchange gave a good reception to the Government's White Paper. The gilt- edged market immediately improved and equity share prices went ahead on small...

The Rustication of a Field-Marshal By STRIX I WAS among the first of those who offered, some months ago, to give a home to the equestrian statue of Field-Marshal Lord...

By ALAN BRIEN PERI Ines because I no longer have an office, I find I cannot take very seriously the revelations in the new Institute of Directors' pamphlet about over-crowding...

After the Fiasco By LESLIE' ADRIAN I AM glad to say that the British travel trade has not forgotten the fiesta affair. This week, while the holiday-making public are still...