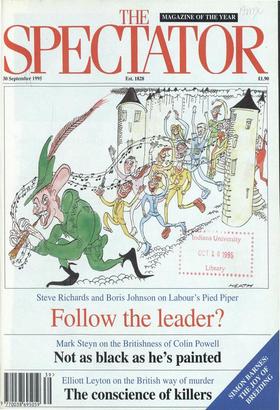 The British at breakfast M r John Major returned from talks in Majorca between heads of government of the European Community which were utterly inconclusive. Mr Theo Waigel, the...

RICHARD LITTLEJOHN T he Washington Post and the New York Times last week gave into pressure from the FBI and the Attorney-General and agreed to publish a 35,000-word manifesto...

Forget the Yuppies and Dinks: let's all make Whoopie AUBERON WAUGH L ast week Rover launched a new sports car, the MG F:1.8i, with mid-engined and rear-wheel drive like a...

Steve Richards analyses the language of 'new' Labour and argues that it obscures rather than illuminates the true nature of the division in British politics IT IS one feat to...

THESE PEOPLE? Boris Johnson attempts to discover the identity of the hundreds of thousands of new Labour Party members THE TAXI throbs deep into the evening of darkest...

THE HEADING `Laski Talks Too Much' is taken from the New York Sun and quoted by the Daily Telegraph. It covers an article by the Sun's regular columnist beginning: "Since the...

A profile of Alastair Campbell, Tony Blair's PR man, who makes Sir Bernard Ingham seem like a softie THE PRESS'S obsession with the Labour Party's team of spin doctors has...

THE EMPIRE STRIKES BACK

Mark Steyn argues that if General Colin Powell becomes president of the United States it will be the vindication of British imperialism New Hampshire IF YOU'RE not excited by...

MY HUSBAND went the other week to one of those conferences (this one was in Spain) that the drug companies so altruistically pay for, and I went too. As he was busy with...

PREPARE TO BE APPALLED

Charles Clover walks the route of the proposed Newbury bypass — and decides to lie down in front of the bulldozers Last week I walked nine miles of England which will soon be...

persist. . . IN THE eternal struggle between doctor and patient, I told a medical student last week, the patient always has the upper hand. This is because, while the doctor is...

Elliott Leyton explains why half of those Britons accused of killing try to kill themselves THE TRIAL of Mrs Rosemary West, which opens in Winchester next week, is not quite...

Room for the Hong Kong Chinese if they pay for others to leave PAUL JOHNSON T he right wing of the Conservative Party is wrong to oppose the request by the Gov- ernor of Hong...

Sir: In the context of both Government and Opposition agreeing to reject Governor Patten's call for the people of Hong Kong to be given the right of abode here, the point does...

Sir: We must be grateful to Peter Singer for confirming

that those who support abortion must logically support infanticide, euthana- sia and the general devaluing of human life. However, he understates the profound shift in morality...

Sir: Peter Singer's article on the ethics of infanticide and

abortion is flawed both in its overall approach and in detail. Firstly, the approach: the article focuses on the most difficult, borderline cases — eg. anencephalic babies; are...

Sir: There is a point to make in support of

Charles Moore's admirable article on being granted a Gold Card as proof of being Homo sapiens (Another voice, 23 Septem- ber). In fact Professor Singer himself makes it: 'Surely...

Sir: As a multi-currency fund manager for over 12 years, I was amused by Andrew Mares(`The real enemy is the money mar- ket', 9 September) and John Laughland's ('Whose money is...

Sir: John Laughland, in the course of his strange article

on monetary union takes issue with me over my assertion that Britain ceded authority (not sovereignty) to Nato over war-making. During the Cold War, the ballistic missile-firing...

Sir: One among many attractive features of George Soros (`More money than sense', 16 September) is that he remembers his London School of Economics fellow stu- dents and...

Sir: Martin Vander Weyer's excellent arts centre at Helmsley, North Yorkshire is in the money. I am delighted to report that, after failing to scoop £110,000 from Brus- sels CA...

Sir: I was more than a little surprised to read Josephine Quinataville's letter (23 September) which can only be described as a complete misunderstanding. In my article on the...

Sir: We should all be indebted to Sir John Drummond for including Sir Harrison Birtwistle's 'Panic' at the last night of the Proms because it has at last given the wider public...

Sir: Richard Littlejohn thinks we are so behind America that arrivals here even have to put their watches back five hours (Diary, 16 September). Forwards, actually. We're still...

Sir: Susan Hill (Terror, sheer, profound terror', 15 September) gives thanks to the NHS for saving her from a wasp sting and then adds: 'There is no country in the world where...

Sir: The widespread opposition to the European Currency Unit (ecu) suggests that it should be named the Unpopular Currency Unit (ucu). If this is felt to under- state the case,...

Sir: I was disappointed and disturbed to read of Taki's lack of compassion for the Greek PM, Ali Babandreou, being inconti- nent and obliged to wear Pampers at all times (High...

One million not out

Sir: I did not see the cover of The Spectator to which Derek Partridge referred (Letters, 16 September), but his claim that it is inap- propriate to use Einstein's famous equa-...

Sir: Richard Dorment writes (Letters, 23 September) that Gilbert and George's `habit of saying what nobody else dares to say about life in modern Britain . . . earns them a huge...

the art of Picasso. Yes, and for two generations nearly every- one who mattered hailed the 'Poems of Ossian' as works of transcendent genius. Time has vindicated Sam Johnson,...

Sir: Following from John Simpson's admirable article on anti-personnel mines (World leaders in mutilation' 23 Septem- ber), may I add that, according to press reports, British...

The Globe is a monument to infuriating, maniacal, irresistible guts SIMON JENKINS T he first time I faced what in journal- ism passes for a guilty conscience happened because...

Publish and be praised

The summer of his discontent

Andro Linklater NOTES FROM SMALL ISLAND by Bill Bryson Doubleday, f15.99, pp. 282 Y ou may not have noticed, but astro- logically speaking it has been a harrowing summer....

Praise him for his well-turned symbols

Anita Brookner THE LIQUIDATOR by Ferdinand Mount Heinemann, £14.99, pp. 213 T his sly and skilful novel proceeds with an engaging air of irresponsibility that only occasionally...

daydreams melting into midnight Linda Darnel Larraine Day girls immortal in a moonlight long ago and far away flesh made celluloid uncarnal ladies lost to touch and taste...

The remembrance of them is grievous unto us too

John Fowles ALBERT SPEER by Gitta Sereny Macmillan, £25, pp. 757 T he gadfly perches on the edge of her armchair, quizzing the ox she has cornered. He sits with a faintly hurt...

James Simmons THE STATEMENT by Brian Moore Bloomsbury, £14.99, pp. 217 I have been reading and reviewing Brian Moore's work for 25 years, though I have missed some of the more...

Back to the Front

Charlotte Joll THE GHOST ROAD by Pat Barker Viking, £15, pp. 256 T he Ghost Road is the final volume of Pat Barker's trilogy about the first world war. It continues the story...

In every temple compound, under some tree Exhausted by its effort to grow Unwatered, yet festooned in faded silks, These bits of broken holiness abound: Stone, plaster, plastic,...

The return of the Antichrist

When you can't find your way home

Nigel Spivey A BORDER DIARY by Shane Connaughton Faber, 19.99, pp. 231 I t has the air of a bin-bound synopsis. Scene is the Irish border, near a confessed dump called Clones....

Robert Cooper T he sticker on the next audio book you buy may well say 'Shortlisted at the Talkies'. The spoken word industry is about to speak for itself. The Talkies will be...

Should we feel guilty? Richard Dowden questions the motives behind the forthcoming exhibitions I t began as a simple idea: 'Let's put on an exhibition of African art.' A...

Chiselled good looks Nigella Lawson I don't happen to think Austen — for all her popularity with drama-makers — does translate well to the screen. Her characters certainly do,...

Totally defeated Taki Gstaad T he Black Forest lies in the highest plateau of Germany, shaped like a giant raindrop, its western edge forming a steep precipice above the Rhine...

Germans do it better Alan Judd I pondered, as model after model flashed past me on the way to North Wales, why it is that I've never owned a BMW. More to the point is why,...

Important speeches Carole Morin T here's nothing like a good funeral. The sight of all those black backs reminds me of my wedding. Dangerous Donald's old girl- friends turned...

Name it Mezzo Jeffrey Bernard T here has been a little storm in my teacup these past two weeks — well, not really a storm but some choppy weather over Sir Terence Conran's use...

Love rules Nigel Nicolson O thello, that paragon of the martial virtues, that proto-Powell, felt himself inca- pable of jealousy, in contrast to Iago, who was jealousy...

BRIDGE Luxury hotel Andrew Robson IN EACH OF THE FOLLOWING auctions, three plausible South hands have been con- structed. Only one South hand is properly con- sistent with...

Imperative cooking: France then and now `REMEMBER to watch those

French porters.' Nearly 35 years ago, when I, as a late teenager, set off to work in southern France, I received lots of warnings. The most insistent, from my mother, was about...

Milk shake Raymond Keene AS HINDUS across the planet celebrated the miracle of the milk-sipping statues of their gods, Garry Kasparov in New York was feeling both shaken and...

A first prize of £25 and a bottle of Graham's Late Bottled Vintage 1988 Port for the first correct solution opened on 16 October, with two runners-up prizes of £15 (or, for UK...

Dear Mary.. . Q. In my former job I worked as an advis- er to a senior Cabinet minister. As a result of accompanying my boss to various meetings, I would frequently find myself...