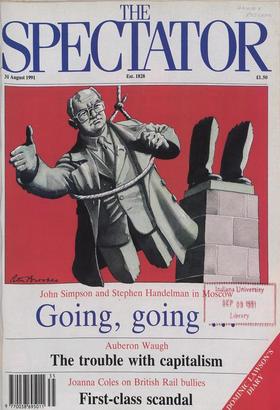 DOMINIC LAWSON T he Spectator has been calling for so long for the British Government to cease its infatuation with Mikhail Gorbachev, and to recognise the greater moral and...

Do we want them all to be as rich as we are? AUBERON WAUGH n this still uncelebrated area of the Languedoc to which I first came in 1963 when I was looking for somewhere inex-...

HAMMERING AWAY AT THE OLD ORDER

John Simpson finds the most unlikely people welcoming the revolution, as a symbol of repression is consigned to history tank helmet, a t-shirt and an arm-band later assured...

THIS IS certainly the age of journalistic hysteria. In an execution at Liverpool, the drop was made somewhat too long for the purpose of merely breaking the neck, and resulted...

Stephen Handelman on the threat of unchecked Russian nationalism Moscow THE TRICOLOUR flag of Russia flew over the Kremlin this week, for the first time since the 1917...

Joanna Coles reports on a case of first-class unpleasantness by British Rail THE APOLOGY was delivered in the usual British Rail monotone. 'Due to the late arrival of a...

Nicholas Bornoff is given a terrible time with his testicles I WAS suffering from an ailment affecting an area of great physical and, indeed, moral sensitivity. It was not...

Sandra Barwick tells the story of a girl murdered under the eyes of the social services IT WAS at the age of 15 that Elaine Foley began to run away from home. Home was a neat...

persist . SYMPTOMS are like bad husbands and wives: people will go to any length to be rid of them but, once gone, they miss them terribly. The result is that the symptoms...

A PLEA FOR MORAL GRAVITY

The media: Paul Johnson surveys a decade of change and hope in journalism IT IS NOW over ten years since I began this column analysing and criticising the media from a...

Sir: It is tedious to have to confirm once more

that Mr Forbes does not know what caused Lord Randolph Churchill's death. His information is derived from hearsay and gossip which he tries to support with impressive but false...

Sir: I daresay it was during your machine's disgorging of far more fascinating copy from Moscow that the second sheet of my recent faxed letter to you from France (24 August)...

Sir: Matt Frei's 'In the Trenches of Croatia' (10 August) gives cause for concern, which parts of your leading article on the subject aggravate. Mr Frei's article exhibits not...

Sir: Surely (17 August) 'surprise-party' is a combination of two nouns, and should be written with a hyphen: cf. 'house-party.' D Broadbent 12 Partridge Avenue, Manchester

Sir: I am preparing a short memoir of about 7000 words on Napier Alington, who died in Cairo in 1940. Any recollections, howev- er slight, from your readers would be wel- come....

Sir: Michael Lewis's Anglophobic article of 17 August is all old hat. But the efforts of your compositor with his hyphens make the article a joy to des-cribe. Shop-ped is...

Sir: Humphry Smith's depiction of the worst of British tourism (10 August) reminds me of what an American friend (alas no longer with us) found to be the best. Knowing London...

Sir: It is always fascinating to read the defence of a hurt politician. When Mr Brendan Bruce (17 August) revealed his hand by responding to Noel Malcolm he unwittingly (for a...

Sir: As a firm believer in the reality of heav- en, I must have been among many who read with some relish Monsignor Gilbey's discussions on the life hereafter with John...

Sir: The excellent Barry Riley is surely right to suggest (10 August) that 'the most important true and fair view the auditors can project is of themselves'. Unfortunately most...

Back to Methuselah James Buchan BERNARD SHAW THE LURE OF FANTASY 1918-1950 by Michael Holroyd Chatto & Windus, £21, pp. 544 T his volume of biography opens with its subject...

Children of a lesser god

Angel-faced reflection in the window, You have tempted me to glance at the passenger Sitting opposite: she is a grandmother of sixty... But you, placid reflection with no trace...

Tony Osman BULLY FOR BRONTOSAURUS by Stephen Jay Gould Hutchinson Radius, £16.99, pp. 540 Y ou can think of this collection of essays — articles reprinted from the magazine...

In formula, in moving, how express

Frances Partridge T he introductory leaflet to this antholo- gy announces that, over the years, Granta has been publishing 'a peculiar brand of writing' which 'has little to do...

Letting 'I dare not' wait upon `I would'

Caroline Moore A CLOSED EYE by Anita Brookner Cape, £13.99, pp. 255 T his is a book about courage, or the lack of it, and about honesty, the broker for both courage and...

A whimsical explanation of disillusion

Poetry as wisdom or news service

We opened the front door. The wakeful house Threw yellow rhombs out on the silvered lawn. The air was utterly still. The cedar trees Stood drawn in brilliant pencil on the...

Art Accentuate the positive T here are few things like a spot of unlooked-for illness to put the mind in more reflective vein. I am still unable to make my usual rounds of...

Last week's illustration on page 33 was of Michael Andrews's

Bayreuth's bronze age David Mellor S o, it is true what they say. The sound of the orchestra from the pit at Bayreuth real- ly is a miracle. Every strand is clear. The tone is...

Master of the cup and saucer Robert Tanitch on the play- wright who brought naturalism to the Victorian stage T W. Robertson (1829-1871) is such an important figure in the...

Mountain gloat Taki guess I didn't celebrate the collapse of Communism too soon after all, although had I known what I do now, I would have waited until October '91. My next...

The Lime Grove family Martyn Harris T he modern world ended in about 1974, and we have been living with replays ever since. The most recent came on Monday, when BBC 2 devoted...

Backpack attack Zenga Longmore I reland is such a delightful country that it is small wonder so many holidaymakers want to go there. But why are they virtually all Continental...

Summer break Jeffrey Bernard am having my summer break here at the Peacock Inn where I was a regular 20 years ago. In fact I am having two summer breaks since I fell down the...

TO MAKE a proper Spanish omelette, you need a cat. It does not have to be a Spanish cat, though I have found that a young cat is better. The recipe books and the newspaper...

COMPETITION e gAVAS REG A L 12 YEAR OLD SCOTCH WHISKY Village voice Jaspistos SCOTCH WHISKY I n Competition No. 1691 you were in- vited to provide an account by an exasper-...

The other night, in a state of great relaxa- tion, I wrote the following in the spirit of `Banjo' Patterson, 'the Bard of the Bush': I've been bossman and tuan and bwana From...

Lightning bowling Frank Keating TURN up or tune in to Lord's next Saturday for the NatWest cricket final and you will see the boy who could well become the fastest bowler in...

Q. What is the correct etiquette on wav- ing? One thing that completely ruins coun- try weekends for me is the business of waving goodbye to one's hosts as we drive away. Having...