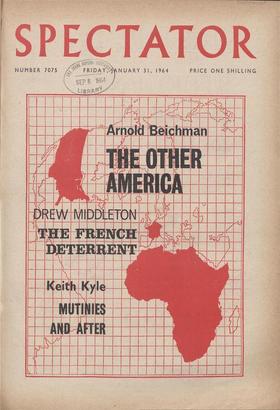 LORD SALISBURY in the Sunday Times • asks how the great ideal of the Com- monwealth is 'reflected in the recent actions of, say, Dr. Nkrumah or the new Govern- ment of Zanzibar?...

Portrait of the Week— 'VERY SOON I SHALL BE ELECTED

by the whole nation,' the Prime Minister told the Commons; Dr. Nyerere saw the attraction of the idea, and revealed plans to make Tanganyika a one-party State. On the same road,...

The Coming of Zambia

From HARRY FRANKLIN LUSAKA C OMPARED with revolution in Zanzibar and mutiny in Dar-es-Salaam, the press found the Northern Rhodesia elections a tame affair. Even the Russian...

With One Voice By DAVID WATT 'YOU see what eloquence will achieve,' said Mr. Quintin Hogg to his neigh- bours on the Treasury Bench as the tellers an- nounced a government...

Froni•DREW MID . DLETON PARIS O VER the last year French preoccupation with the independent nuclear force now being built has reached the point where it may be asked whether...

But is our crime interrogation to remain un- changed for another fifty years in the shape given by the present code? These rules were produced at a time when our legal system...

With no reference to the last paragraph, I sometimes wonder what happens to the TV ad- vertisements rejects. After all, some conversations must have gone like this: 'Can I do...

The Press Council's decision on the Sunday Tintes's publication of a letter from Lord Den- ning to a Cabinet Minister at the time of his famous inquiry is an odd one. Lord...

From MURRAY KEMPTON WASHINGTON T HE events in Panama seem to have left a good many Americans in that conflict between guilt and resentment which has always rendered the...

It was noticed in this column last week that the images of the major political parties were now being translated into posters. Mr. Wilson was being shown as a cheery, friendly,...

Scene: A famous Conservative Club. Settling down to their evening papers are a VERY IMPOR- TANT CONSERVATIVE and Member of Parliament. MP: I've been giving the whole question a...

By RANDOLPH S. CHURCHILL T HE attitude of The Times Literary Supple- ment towards the best - selling paperback Scandal '63, which was published five months ago, is really most...

Habeas Corpus for the Commonwealth?

By EDWARD GARDNER, MP A uncounted multitude of political prisoners are now in prison and no one can say when, if ever, they will be released or brought to trial. Hundreds of...

The Social Revolution in Education

By ANGUS MAUDE, MP 7 1 HE year 1964 brings two important British I anniversaries besides the Shakespeare Quater- centenary. One is the fiftieth anniversary of the outbreak of...

Copies of the 'Spectator' for January 17, containing lain Macleod's

article, 'The Tory Leadership,' are still available by post from this office, price Is 3d. each. If quantities of this issue are required, please apply to the Sales Manager,...

From KEITH KYLE DAR-ES-SALAAM fr tie most striking feature of the Tanganyika mutiny was its lack of political content. In the early hours of Monday morning last week the...

SUPPRESSION has so far been assumed that Mr. Randolph Churchill

can read as well as write. But there now appear to be limits to his capacity to do so. He claims that a letter which he wrote, dated January 18, was 'suppressed.' The letter...

SIR,—Kathleen Smith's article is one of the finest pieces of

commonsense constructive thinking we have ever come across. We live here in a newly developing society, have some responsibility for its future, and wish strongly to support her...

should have thought that Mr. Randolph Churchill was an old

enough hand in the world of journalism to see: (a) that his letter to the Daily Telegraph was far too long; (6) that, even at a penny a line, he has gained 3s. 3d. by using...

POLLS AND THE ELECTION

SIR,—It was a pleasure to read Mr. David Butler's fair and accurate account of the polls which appeared in the Spectator of January 10. However, it did contain one small error....

SIR,—This is just a note to say that I consider

Miss Kathleen Smith's article 'The Cure for Crime' to be the most significant I have read on any subject for some time. I do hope that it becomes somebody's official business to...

ME AND MY GIRL Si,—Sillier pieces than Kate Wharton's in

defence of the English boarding school system may have been written. But not, I would think, often. Like Eleanor Whitour (whose Twentieth Century article on home versus...

THE YEARS OF THE LION

SIR,—I hope you will not regard me with suspicion if I say that I have decided after deep thought to dis- claim the knighthood which Mr. Kingsley has given me in your columns....

THE WATERS OF JORDAN

SIR,—Your correspondent in Cairo, Desmond Stewart, says that the Arab States maintain 'they are in a technical state of war [with Israel] and this state of war can only be ended...

SIR,—There are some things here that Councillor E. C. F. Brown, Canterbury Conservative Agent, does not understand. I agree with him when he says that party political...

SIR,—Quooclle takes New Outlook and the Liberals to task for

indecent exposure (Spectator, January 17). He goes on to suggest that such nakedness is best bidden, and' he infers that what the public sees is a pretty poor specimen. To set...

SIR,—If you call me a liquid Liberal, I think I shall call you a tortuous Tory. (Actually, I am a solid Socialist.) Tortuous, because you quote me out of context in a pretty...

By DAVID CAIRNS singers who can act.) Reservations that one might have had -before the event now seem meaningless. Was Tosca the opera to celebrate the return of Callas to this...

If I followed Mr. Tynan's argument correctly, it seemed that the only art forms that appealed to him were narrative, so his intelligence must be taking umbrage every time he...

From EMMA BOOKER NEW YORK MOST of the cast and some of the writers of TW3 flew over to New York last Fri- day; shouting in their cock- ney accents and waving metaphorical...

AMONG intellectual ar- chitects one of the least fashionable things to be is an admirer of Sir Basil Spence. At first sight this might seem • • to be sour grapes be- cause...

When We Were Married

She took the book from the shelf And turned the pages slowly. 'I loved this book,' she said, 'When we were married. "lhat song that teases silence Was a favourite of mine; It...

IF a country insists that its heroes be without blemish it will make `dgbunking' a profitable enterprise. One cannot help feeling that this is the appropriate reaction to Mr....

THIS book will possibly become the most efficient piece of pro-Castro literature. Its thesis is simple: Cuba was a miserable and stagnating country, dominated by US imperialism....

'I want you to be dependent,' she said, So I rode out on my horse and tore down Many a steep hill and into a dark wood, And leapt the becks and always returned Weary and muddy...

A Long Drink of Porter

The Collected Stories of Katherine Anne Porter. (Cape, 35s.) DYLAN THOMAS, at one of those devastating and eventually devastated parties in his American honour, picked up Dr....

Dare Call it Treason. By Richard M. Watt. (Chatto and Windus, 30s.) TRE,year 1917 was one of revolutions—or, if you like, the true Year One of this century. It was the year of...

. The Last Bohemian The Life of Riley. By Anthony

Cronin. (Seeker and Warburg, I8s.) Where the Sun Never Sets. By Jerome Weidman. (Heinemann*, 21s.) AN unadventurous week for fiction: five for- gettables neatly trussed for the...

SOLUTION TO CROSSWORD No. 1102

By NICHOLAS DAVENPORT IF Mr. Harold Wilson in- tended to encourage the business community, as I believe he did, in his for- ward-looking speech at Swansea, with its emphasis on...

By CUSTOS M R. WILSON'S speech at Swansea was too much for the nerves of the private investor, who, on the first day of the new account, stepped up the 'small' selling which he...

By LOTHBURY B OWMAKERS, the hire-purchase group, re- cords a marked recovery for the year ended October 31, 1963. It has had the benefit of a full year's working since the...

By MARY HOLLAND What happens, , •mundanely, is that they ques- tion your wisdom--good jobs being hard to find ---and then' ask when you intend to go. Even this rarely brings...

Appellations ContrO16es By LESLIE ADRIAN I dined the other night at a newish restaurant created out of a Regents Canal barge, the Barque and Bite. Coy names apart, this is a...

By ALAN BRIEN 'AND with one bound Jack was free.' Our hero (or, at least, my hero, that is to say, me) has temporarily escaped from the Face at the Window, the Ring in the...