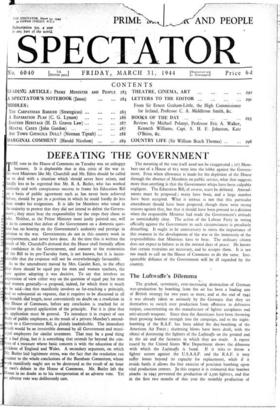 T HE vote in the House of Commons on Tuesday was an unhappy business. It is deplorable that at this crisis of the war in the west Ministers like Mr. Churchill and Mr. Eden...

A BROADCAST address by the Prime Minister in these days ti is a matter not of national but of international importance, and the significance of last Sunday's talk was enhanced...

2 S NOTEBOOK 0 OME of the references in the past week to Mr. Eden's possible retirement from the Foreign Office, with the suggestions that he is the victim of a Ministerial...

By STRATEG1CUS T is easy to recognise the risks the Germans have taken by I standing 'so far to the east on lines that they have no longer the resources to maintain ; but it is...

By C. G. LYNAM The Allies, unfortunately, never seemed to be quite clear whether Reparations were meant as a punishment to the aggressor, a help to the victims, or an insurance...

By H. D. GRAVES LAW A WORLD War, with the artificial•and rigorous limits it imposes on travel, accentuates the importance of such contacts as escape those harsh barriers. It...

By M. CLARK-HALL HOULD you ever open a door in a Military Headquarters and behold a rubicund face peering over an immense pile of forms of varying colours ; should the Officer...

By NORMAN TIPTAFT I SAID to a well-known editor recently: "Why don't you print a few articles about local government? It affects people far more closely than national. Whether...

By HAROLD NICOLSON ciOMETIMES, when the setting sun sinks into the scarlet haze of Bayswater, when the evening star shines solitary in a moonless, cloudless sky, the dark wings...

Ivon Hitchens at the Leicester Galleries Six of the pictures in Ivon Hitchens' exhibition of recent - work seem to me to be the best he has ever painted, and that means they...

"A Murder for a Valentine." At the Lyric.

THE THEATRE THE drama can be taken too seriously (as Charles Lamb once sug- gested), but it can, also, not be taken seriously enough. Even if he avoids confusing true with...

I DREAMT Orion drew his sword And turned in vengeance on the Bear.. I saw the starry features twist In more than mortal rage. And, as the ursine mass recoiled From that...

SIR, —In your Editorial Notes for Marsh ath, you described the neutrality of Eire as "hostile." May I put briefly a few facts? Irish official records show that since September,...

LETTERS TO THE EDITOR SIR, —In your editorial "Doctors and the Public," March 24th, 1944, you make certain statements concerning myself which I would ask your per- mission to...

SIR,—It must have cheered many "old China hands" in this country to read the admirable letter written by Lady Southorn and published in yonr issue of March 24th. My residence in...

Sta,—Mr. Kerr's answer may, as he says, "be simple," but it .is an example of the fallacy post hoc, ergo pro pter hoc. It is true that the volume of our export trade has...

SIR,—May I draw attention to a suggestion in L. J. Cadbury's article "The Population Trend" that is positively dangerous? He (I hope not she) declares that the " directing " bf...

Sta,—The very inept way in which the trial of Pucheu was conducted is much to be regretted, not only because it tends to confirm the comfortable contempt in which Englishmen...

THE NEW ORDER AND THE LEAGUE Sin,—It is, I assume,

generally admitted that in preparing a new inter- national order after the war, nothing would be more useful than an objective and clear understanding of the "great. experiment"...

The Making of a Nation

Adventures of a Boer Family. By Victor Pohl. (Faber and Faber. 7s. 6d.) "Or all the Dominions, South Africa has behind it the most varied, the most vivid, and the most...

The Socialist Error The Road to Serfdom. By F. A. Hayek. (Routledge. vas. 6d.) SOME of us still recall that before 1914 you could travel across all the countries of Europe...

The Future of Islam

The Prospects of Islam. By Laurence Browne. (S. C. M. Press. 6s.) IN this little work there is more comprehension than is commonly found in Christian missionary writings on...

THE title is misleading. Miss Mytinger and her friend only

hunted the heads of primitive negroids in the South-West pacific to draw, not to scalp them. The two girls started with none of the usual expeditionary paraphernalia (only a...

THERE are as many national characteristics in the English boy as in the grown man, and a desire to go to sea is one of the most prominent of them: The author of this...

The International Development of China. By Sun Yat-sen. ShOTU7 Notices

(Hutchinson. 75. 6c1.) Boni the Chinese Ministry of Information and the publishers who have acted for them, are to be commended for the republication in handy form, and at a...

England Herself. By Roll Gardiner. (Faber. 85. 6d.) LEST agriculture

in this country should again witness the frustra- tion and disillusionment which followed the first world - war, it would be well for as many interested people as possible to...

SOLUTION TO CROSSWORD No. 262

SOLUTION ON APRIL 14th The winrer of Crossword No. 262 is MICHAEL HOLLAND, Lullings, Balcomhe, Sussex.

44 Book Token for one guinea will be awarded to the sender of the first correct .aion of this week's crossword ICI be opened after noon on Tuesday week, Enveopes should be...

A NEW and " blessed word," dedication, is coming into vogue. For some years altruistic land-owners have been dedicating their property to the nation. They can now dedicate their...

stories are enjoying a mild boom ; with the rush of war and scarcity of papa they are becoming more widely written and easier to publish. This is all to the good, but it has...

No Spaghetti for Breakfast. By Alfred Wagg and David Brown.

(Nicholson and Watson. los. 6d.) THIS curiously named book is about the campaigns in Sicily and Southern Italy. The suspicion aroused by its title is not altogether allayed by...