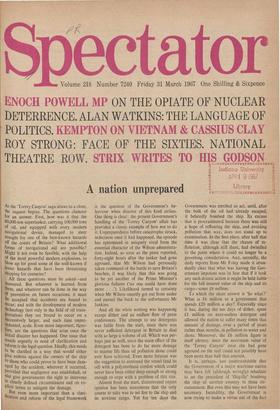 A nation unprepared Lib :cry • ?f As the 'Torrey

The theatre, and in particular its so-called serious or non-commercial arm, has an un- canny flair for drawing attention to its seam- iest side. Spite, fury and hysteria erupt...

The consequences of Mr Powell

If we are to spend £2,000 million a year on defence, the least we can do is to see that the assumptions on which our strategic posture is based are not merely politically...

TEERE was another abortive attempt by U Thant to make peace in Vietnam, an uprising in Sierra Leone with farcical aspects, a great spy scandal in Italy, more bloodshed in Aden...

The language of politics

POLITICAL COMMENTARY ALAN WATKINS In the latest instalment of his autobiography, Lord Longford tells of an offer that Evelyn Waugh once made. He invited Longford to stay for a...

CHRISTOPHER HOLLIS It has been suggested that we might have Summer Time all the year round. If all the year were summer and reason went with rhyme Then nothing would be rummer...

EDUCATION DAVID ROGERS Up to now the debate on the use of teachtng assistants has been notable for spotlighting the worst features of our educational way of life more than the...

AMERICA MURRAY KEMPTON It is a depressing indicator of President John- son's low public credit that he should have made a fair-seeming tender of peace, that Ho Chi Minh should...

An end to Monroe

LATIN AMERICA MALCOLM RUTHERFORD Malcolm Rutherford has recently returned from a visit to the subcontinent. American Presidents, including President John- son, are now...

R. A. CLINE That notorious patCh of oil polluting Britain's beaches has given rise to about as many legal problems as the pieces into which it has frag- mented. Anyone with a...

THE PRESS DONALD McLACHLAN There is only one thing left for me to know about the Seven Stones disaster: that is why the tanker was called the 'Torrey Canyon.' If sonic news...

NIGEL LAWSON The Ministry of Technology's non-role in the non-protection of Britain's beaches from oil pollution bears all the hallmarks of Mintech and its chief, Mr Benn—the...

DEFENCE J. ENOCH POWELL, MP It seems as if every generation needs an opiate to dull its senses and save it from the necessity of seriously contemplating a future war. Between...

MEDICINE JOHN ROWAN WILSON Almost a year ago I wrote an article for the SPECTATOR with the title 'Is general practice outmoded?' The view that conventional family doctoring...

A letter to my godson

PERSONAL COLUMN STRIX DrAR X You are in luck. If Mr Simon Raven had not recently published in the SPECTATOR 'A letter to my son' I should have forgotten that your fifteenth...

MARTIN SEYMOUR-SMITH Le Morte Darthur has been prized as the English classic of chivalry ever since Caxton published it in 1485. A better text than Cax- ton's, though like his...

VERNON WATKINS Those others take the mountain path And these possess the plain. You, you alone your mother Earth Held back, as by a chain. You knew the bitter taste of salt,...

ANTHONY BURGESS Giles Goat - Boy by John Barth (Seeker and Warburg 42s) That this is a book there can be no doubt (ah, how delightful it must have been to be Arnold Bennett,...

ROBERT BLAKE John Wilson Croker (1780-1857) should be remembered for one thing even if all else about 4im is forgotten: he invented the name of onservative' which was adopted...

PETER VANSITTART Lord Norwich has chosen a theme instructive to those, probably numerous, to whom The Norman Conquest' refers to England only. The other eleventh century...

FRANCIS WATSON Panditji el Portrait of Jawaharlal Nehru by Marie Seton (Dobson 63s) During the last year of his life Jawaharlal' Nehru carried about with him these lines...

TERENCE BENDIXSON Britain's knights of architecture are a fairly mixed bag. The only common ground between them seems to be that they are architects and have had a royal tap on...

Elegiac Orson PENELOPE HOUSTON Chimes at Midnight (Academy One, `U') An Actor's Revenge (Academy Two, 'A') The Honey Pot (Odeon Marble Arch, 'A') Etonnez-nous, Orson! This has...

WAXWORKS ROY STRONG I suppose mine must be one of the few minds that could wander from David Bailey's photo- graph of Sir Mark Palmer flanked by the scions of his firm, English...

The Glorious Resurrection of Our Lord

THEATRE Something up? HILARY SPURLING (Polish National Theatre at the Aldwych) Peter Da ubeny is here again, directing the fourth World Theatre season at the Aldwych: the...

NICHOLAS DAVENPORT The Department of Applied Economics at Cambridge has been researching, under the guidance of Mr W. B. Reddaway, into the effects of direct investment...

JOHN BULL It is not often that the National Savings Com- mittee has anything to shout about. It has now. Those discreet advertisements about the twelfth issue of National...

CONSUMING INTEREST LESLIE ADRIAN Every season the cold cures are arrayed before us on television, to the great discomfort of doctors who worry lest the placebos may be used to...

Sir: Years ago I had a friend whose first-class brains

had won for him a post in the Civil Ser- vice from which he could enjoy (?) a close-up, or rather an intimate worm's-eye view, of the leading British politicians at the end of...

Culture on the rates

Sir: It seems that Goering's dictum 'When I hear anyone talk of culture I reach for my revolver' is still cherished in the hearts of some local authority members. Here in...

Sir: I feel that Simon Raven's greatest transgression is his

misleading advice on avoiding a bastard and the pox, 'both easily avoidable if you make a few simple purchases before you open your breeches.' Mr Raven's son unfortunately...

Sir: Common policy is more urgent than common market. We may not get terms for full member- ship of the EEC compatible with our national, EFTA and Commonwealth interests; yet,...

Letter to my son

Sir: Poor young Raven, doomed to becrme a friendless, self-centred, unloved, globe-trotting bore of a bachelor, should he choose to follow his father's advice (SPECTATOR, 10...

Sir: Simon Raven's letter to his son (10 March) was

wholly admirable for what it was, but it contains one fallacy. Mr Raven advises his son, wisely perhaps in the circumstances, that his extra three years at school will help him...

Sir: I wonder if you will allow a first-year LSE student to reply to Professor Brogan's article (24 March). Firstly, let me assure your readers that though we would all like...

Sir: Perhaps they are not just optimistic Christians who hope and believe that the fears expressed in Mr Hogg's Easter sermon (24 March) will not be realised. Perhaps Christians...

Sir: I can't quite understand the trouble you-are taking over the problems of an economic policy for Britain. These problems were solved four years ago, and even then it was...