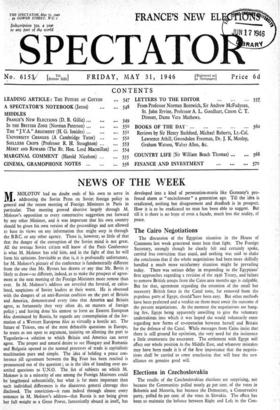 The discussion of the Egyptian situation in the House of Commons last week generated more heat than light. The Foreign Secretary, strongly though he clearly felt and certainly...

M MOLOTOV had no doubt ends of his own to serve in • addressing the Soviet Press on Soviet foreign policy in general and the recent meeting of Foreign Ministers in Paris in...

The results of the Czechoslovakian elections are surprising, not because the Communists polled nearly 40 per cent. of the votes in Bohemia and Moravia, but because the...

The Future of Iron and Steel

The two-day debate on the nationalisation of the iron and steel industry threw into even stronger relief than before the utter irresponsibility of the Government in pressing on...

The Need for Scientists

Great Britain, states the Barlow Report on Scientific Man-Power published this week, can least of all nations at the moment afford to neglect her scientific talent, and...

The proper arrangement of the respective functions of the National Gallery, the Tate-Gallery and the Victoria and Albert Museum is a public question on which haste is not called...

Throughout the four months in which the food .crisis has been publicly discussed The Spectator has consistently said that, although the problem is tangible enough, it contains...

OF COTTON A COMMON criticism of the decisions so far taken by the Government on British industry, and on the iron and steel industry in particular, has been that they were not...

These initials are getting pestiferous. The Manchester Guardian, reporting the

meeting of the United Nations Economic and Social Council in New York, heads it, "First Meeting of U.N.E.S.C.0." But it wasn't. E can stand for Educational as well as Economic,...

The Parliamentary Secretary to the Board of Trade said on

Monday that, owing to the shortage of the raw materials needed, the pro- duction of pianos is at present reserved for export only. In other words, peace at home and discord...

T HAT the first full Ministerial office to fall vacant would go to Mr. John Strachey has long been taken for granted, for the Under- Secretary for Air has shown himself in a...

The meetings of the National Federation of Women's Institutes at

the Albert Hall this week has been a very notable success, not the least element in which was the contribution made by the Queen on Tuesday. The clearness and simplicity of her...

It would not be very easy to think of two

men who have done a greater service to English culture than Ernest Rhys, who died last week, and J. M. Dent, who died twenty years ago. Honours may be distributed evenly between...

Long memories impel me to break a normally rigid rule

and put in a word for the fine old parish church of St. Andrew's, Plymouth, destroyed in the blitz of March, 1941. British history is built into the tower and the empty shell of...

No ceremony could have been more agreeable than the presenta-

tion to Lord Cecil of his bust by Siegfried Charoux at Chatham House on Wednesday, and no tribute better deserved than that paid to the League of Nations veteran by Mr....

IN THE BRITISH - ZONE

By NORMAN PATERSON O NE day a Russian, a Frenchman, an American and an Englishman were looking round an aquarium when suddenly out of a tank jumped four gold-fish. The Russian...

By M. G. IONIDES B EFORE the war it was accepted that the "economic absorptive capacity" of Palestine must set a final " ceiling " for immigra.- non. Nowadays, it seems, there...

By A CAMBRIDGE TUTOR T HE universities are approaching the end of their first year of grappling with post-war problems and readjustments. Last October all universities viewed...

By PROFESSOR R. H. STOUGHTON N reply to questions in the House recently the Minister of Agri- ' culture stated that tomatoes and other horticultural crops have teen successfully...

By THE RT. HON. LORD MACMILLAN T HE elimination of economic insecurity from our lives is a laudable aspiration, and all friends of humanity must welcome the introduction of...

By HAROLD NICOLSON I HE habitual, as Goethe remarked, is apt to make us tame ; and it is curious how evzn the most imaginpive- and lively people derive a private satisfaction...

I , The Years Between." At the Leicester Square.—" Premier Rendez- vous." At the Curzon. ONE approaches Mr. Box's new film with keen anticipation and a little anxiety. During...

"TO THEIR SLOW PREMIER"

(Resolutions on the Labour Party's Whitsun Conference criticise the Government for not proceeding far and fast with Socialist legislation.) HAD we but world enough, and time,...

Goon recordings of Berlioz's music are few and rare. I therefore welcome and recommend particularly his Harold in Italy, played by the Boston Symphony Orchestra under...

"Khadra." At SadIer's Wells. THE new ballet Khadra is a welcome addition to the company's repertory, as it is not only good in itself but it adds variety, being in absolute...

MR. MICHAEL AYRTON Will be away painting during the summer, and in his absence Mr. M. H. Middleton will be reviewing the art exhibitions.

siR,—It is, I fear, tiresome to rake up again the controversy concerning the alleged conflicting promises, to Jews and Arabs, about the Promised Land during the first World...

"RUSSIA UNLIMITED" Sul,—Does Mr. Winterton realise that he is urging us to fight Russia now, while she is comparatively still weak? Because that is the unex- pressed conclusion...

Sut,—The Dean of Chichester, I feel sure, goes to the

very heart of Soviet relations with the democrccies when he refers to the Kremlin regarding itself as having "the true and only system of human happiness, which must eventually...

Sitt,—In your reply to Mr. Leonard Stein you quote from

Sir Henry McMahon's letter to the Sharif Hussein of Mecca the reservation which excludes from the Arab independence area the "portions of Syria lying to the west of the district...

TRANSYLVANIA Sm,—In your issue of May 24th, Mr. Hevesy suggests

that" the whole of Transylvania" has been awarded to Rumania through expediency and in disagreement with the Atlantic Charter. It will help your readers to form an opinion if...

Snt,—A group of Labour men in the House of Commons, calling them- selves the Friends of Ireland, has lately popped up from obscurity. Its members turn out to 'be'friends of Eire...

PASSING OF THE SCHOOL CERTIFICATE

Sni,—There can be no doubt that, whatever Government had been returned to power after the General Election last July, one of the earliest steps taken by its Minister of...

Sat,—Dr. Murray, in your issue of the ath May, writes that a marriage should be 'arranged and duly solemnised with pomp and ceremony be- tween the Liberals and Liberal...

' IN MEMORY OF EDDINGTON

Sia,—Your readers will need no reminder of the loss the world sustained through the death last year of Arthur Stanley Eddington, for more than thirty years Plumian Professor of...

Sta,—By an odd coincidence, I also had heard of the trial of Warren Hastings to which Mr. Warmington refers in his letter of May 24th. I did not cite this case in my original...

Sm,—May I support Canon Anthony Deane's plea for a fuller recognition of the Apocrypha by pointing out that in Anglican formularies other than the Sixth of the Thirty-Nine...

SIR, —As another journalist, I feel that Jossleyn Hennessy has given a squalid defence of journalists who intrude on private grief in the way justly complained of by Professor...

Sni,--With reference to your mention of the nationality of British-born women who marry aliens, you will doubtless have noticed in a recent Times the statement that the...

was horrified to read in Edgar Anstey's review of Le lour se Live that this great film has been purchased so that it may be destroyed. It would be comforting to be assured that...

The State of Public Knowledge. By K. E Barlow. (Faber. 8s. 6d.) PouriciAtIs are fond of telling us that, if only knowledge were a little more widely diffused, three-quarters of...

A Medical Cause Célèbre More11 Mackenzie. By R. Scott Stevenson. (Heinemann. 15s.) MORELL MACKENZIE, who was born in the year that Queen Victoria came to the throne, can...

-The Garden. By V. Sackville-West. (Michael Joseph. 8s. 6d.) MISS SACKVILLE-WEST with her new book again raises the problem of the modern long poem. Chaucer could write a novel...

Ethiopia Under Haile Selassie. By Christine Sandford. (J. M. Dent and Sons. 10s. 6d.) .11,•=; MRS. SANDFOFtD is distinguished from all the other recent writers on Ethiopia whom...

Wanderer in War. By Norman Bentwich. (Gollancz. 8s. 6d.) PROFESSOR BEastrwicx, formerly Attorney-General in the Govern- ment of Palestine and later Director of the High...

The Things That Are Not Seen

Collected Papers of Evelyn Underhill. Edited by Lucy Menzies- (Longmans, Green and Co. 6s.) THE secret of the appeal that Evelyn Underhill made, especially in her later years,...

12s. 6d.) MR. A. G.'STREETI new book is a Collection of essays on agricultural subjects. He is by far the best interpreter of the farmer's point of view to the townsman, partly...

The Letters of Charles Lamb. Arranged by Guy Pocock in

2 vols. from the complete, annotated edition of the Letters of Charles and Mary Lamb. Edited by E. V. Lucas. (Everyman Library. 3s. each.) This new edition supersedes the old...

Theatre Royal, Drury Lane. By W. Macqueen Pope. (W. H. Allen. 17s. 6d.) MANY scholarly books have been written on the English stage. But most of them deal with persons or...

Freaks of the Weather To continue the Englishman's favourite subject,

the weather (incident- ally described in most of its manifestations in The Garden, Sackville- West's most accurate epic), the May frosts were nearly as eccentric as the...

"What shrubs shall I plant," writes a soldier of the B.A.O.R., "'in my small garden when I get home?" It is, of course, too big a question to answer ; but I think especial...

A word more may be said about Horsey Mere, for which the National Trust and the Norfolk Naturalists Trust are appealing. If it can be secured it will make with Hickling a really...

Plea for Urban Trees Very ardent pleas have reached me

to join in the defence of urban trees. Recently a number of fine trees in the St. John's Wood neighbour- hood were reduced to the state of mere trunks, because, as it appeared...

ENGLISH weather at its worst is never boring ; and often it is exciting. Witness one of the latest thunderstorms. It took many eccentric courses, some of which I had never seen...

By CUSTOS AFTER one of their occasional pauses markets are again moving up, and in the light of the growing evidence of inflationary tendencies one cannot be altogether...