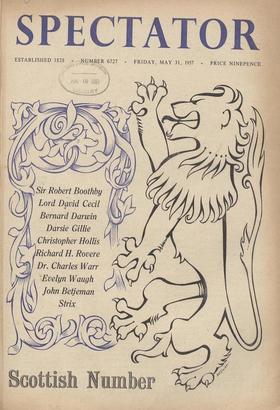 HE sacking of the American Embassy at Taipeh by a mob, following the acquittal of an American sergeant by a court-martial on a charge of murdering a Chinese, is a reminder that...

Mk debate on the report of the Parliamentary I Commission on East Africa finds Kenya with a crisis once again gathering on the horizon. The immediate cause of this is the...

S INCE the Royal Commission on Mental Health was appointed three years ago the climate of opinion on the subject has been gradually chang- ing. The public is now prepared to...

LOOKING FOR A GOVERNMENT

By DARSIE GILLIE Paris T HE President of the Republic has soon dis- covered there is no short way out of the political crisis. He has settled down to a slow siege of the...

THEATRICALLY the work packs the punch of a heavyweight. — Daily Express, May 25. DRAMATIC construction was weak. Daily Herald; May 25. . . . a powerful and moving...

WHO would have thought six months ago that we should by now have time to consider the problem of Germany, let alone with any hope of suc- cess ? Here we are, though, leaving the...

Now to begin with—though this will seem a trivial point to some of the faithful—he was right; it would. Nor need he imagine that he is the only one in the Opposition hierarchy...

ALLEGATIONS that teachers at London University were being asked to 'spy' on their students and col- leagues were made by Lord Chorley. . . . This eruption from the Socialist...

I SUGGESTED the other day that 'the sacking of Mr.

Alastair Forbes from the Sunday Dispatch was disquieting, his political column being almost its only readable feature. It is only fair to admit that the new editorial broom has...

IN SEVERAL CASES lately the Courts in Cyprus have asserted their inde- pendence of the executive in the traditional manner—by refusing to convict. Although they have rejected...

THE EXARCH STEFAN, whose death has just been reported from

Sofia, was the most imposing- looking dignitary I have ever seen—tall and broad, and made even taller by the snow-white hat of his office, with its cross of pearls, and broader...

THE EXECUTION of Ronald Patrick Dunbar has been fixed for

June 6. Dunbar killed an eighty- two-year-old woman after breaking into her house and stealing £90—a clear and brutal case of capital murder under the new Homicide Act. The...

NOTHING THAT Mr. Duncan Sandys has been say- ing or

doing about defence has brought home strategic developments so clearly as an item of the news on Monday morning. It was reported that Admiral Sir John Eccles,...

IT HAS LONG been a complaint of the Irish that

the rest of the world will not take them seriously; but when their authorities act as idiotically as they have done in the case of The Rose Tattoo prosecution, what can they...

THIS IS MORE than can be said of some of

his RAF colleagues, to judge from their boasts after the latest Fighter Command air exercises. With sublime confidence, the Sunday Times air cor- respondent reported that...

Lord Stanley of Alderley wishes to be known in future by the style of his senior barony, Lord Sheffield.—From the Court Circular, The Times, May 22. Trusty as steel, more...

MY NOTE last week welcoming Lord Home's statement that it

was the Government's policy 'to try to get the right man in the right place' has brought from a correspondent the reminder of an earlier ministerial pronouncement on this...

The Seamy Side of the Welfare State

By DR. DONALD McI. JOHNSON, , MP HAT is your patient's age, doctor?' queried the Emergency Bed Clerk. 'Sixty-two,' I lied cheerfully into the telephone receiver. It was the...

Why Are There Wars?

By CHRISTOPHER HOLLIS W HEN sometimes in criticism of a faithless and war-loving tyrant, we speak of a• return to 'the law of the jungle,' we do less than justice to our fellow...

New York UROM almost any point of view, Alger Hiss's r book, In the Court of Public Opinion,* deepens the mystery of the Hiss-Chambers case. Hiss pleads an absolutely...

'Can I help you, sir?' said in a tone of voice meaning 'What the hell are you doing here?' by a uniformed official with a cup of tea in a cubby- hole and the sporting page of...

By STRIX A WHIFF of guilty' splendour goes with the A possession of a swimming-pool. It is an un- English amenity. Though congruous to California, it has in these islands all...

'By JOHN BETJEMAN L ST week I was standing on the seventeenth- century walls of The Citadel at Plymouth. Wind-whipped water of lapis blue, the shadowy red sandstone cliffs above...

I believe that the correct estate-agents' definition of a 'Mansion' is a house with back and front stairs, but what about 'Mansions' in the plural when applied to blocks of...

Strangers do not realise how rich in fine build- ings and prospects are the three 'towns which compose Plymouth. Devonport has its Doric Guildhall and Naval Column and Egyptian...

By LESLIE ADRIAN A E Spectator readers as a group particularly partial to aperitifs? Or why should two sub- jects I haVe commented on recently—sherry and gin and tonic—have...

By THE VERY REV. DR. CHARLES L. WARR, KCVO On Tuesday the General Assembly of the Church of Scotland commended the Joint Report on closer relations between the churches to 'the...

The Marginal and the Mandarins

By FREDERICK LUMLEY T JERE is a good deal of the mask and the face when we consider Scottish writing today, not, of course, in the frenzied Pirandellian sense, but in the much...

By J. STUBBS WALKER H UMAN affairs transcend the wonders of modern nuclear development which the United Kingdom Atomic Energy Authority has been showing off to curious experts...

By DAVID MURRAY W IIEN Edward Caird sought to match the fortune he had made in Dundee with a country seat suitable to his station, he chose a site on the lonely east side of...

By BERNARD DARWIN A A FRIEND of mine is now making good a sad .,,gap in his education;. he has. gone to play golf for the first time on Scottish courses and I am envying him...

IS LATIN WORTH IT ?

Slit,—Your anonymous correspondent who calls him- self 'A Public School Master' assumes from the start that .the knowledge we acquire at school ought to be knowledge that will...

MR. CHURCHILL AND THE PRESS COUNCIL SIR ; I willingly leave

to the judgement of your readers the opinions which Mr. Randolph S. Churchill is fully entitled to express about the Press Council and its chairman, but he ought not to mis-...

SIR,—The Roman Catholic Bishop of Clifton's declaration, quoted by your

correspondent B. C. Marghcritta last week, that they 'will not rest until every man, woman and child in this country becomes a Catholic,' requires further consideration. It is...

SIR,—Admiral Sir William James is clearly right in saying that Scheer's object, when he realised the trap into which he had fallen on the afternoon of May 31, 1916, was to avoid...

SIR, — It seems that most Englishmen have always agreed that English law is not only the best in ' the world, but the best it could possibly be; , and few who disagree are...

SIR.,—B. C Margheritta should enclose with his next protest to

a newspaper not a stamp for return, but payment and instructions for an advertisement of his own beliefs. He would then doubtless learn what, if not who, controls advertising....

Sia,—Richard H. Rovere's article was a delight— but it was surprising to read his comment on Dinah Maria' Mulock Craik. Despite his incredulity of the lady's name, her...

SIR, — John Betjeman cannot believe that the London County Council may dismantle the Albert Bri4e„ which he feels is too graceful to disappear.. ' Mr. Betjeman clearly finds...

SIR, — Lord Templewood Writes that although some think we should have

fought in 1938 "others will remain convinced that we were right to postpone the clash until our Hurricanes, Spitfires and radar were ready and we could rely on a united front in...

SIR, — Has the time not come when this unsavoury subject should be decently interred? Roger Casement was not executed because of the uncertain .evidence as to whether he was...

SIR,—I will be most grateful if you will permit me to comment on A. J. Wilson's generous notice of my The Eighty-Five Days. I did take notice of the opinions of the German...

Another English Opera IN commissioning an opera from John Gardner in 1952 the Sadler's Wells Trust was putting its money on a dark horse. Gardner was then thirty-four years...

Dream Street (Brunswick) gives Peggy Lee plenty of chance to demonstrate the versatility of her voice in a variety of moods and tempos. Her mellifluous tones are perfect for...

JUNE 2, 1832 ' ON Monday last, a labouring man named Cosby was fully committed to Dover Gaol, charged with cruelty to his daughter, a girl about fourteen years of age. He kept...

THE thirty-four-year-old American painter 'Sam Francis who has painted mainly in Paris and is now working in Mexico does not, I understand, receive much support from the...

Gay Coloured Ribbons By LORD DAVID CECIL A a footnote is interesting for the light it throws on something else, something of more intrin- sic and permanent interest, so also is...

PROFESSOR BROGAN evidently set out to write a sketch of French life from the Restoration to Vichy, and he has come very near providing that much-needed book, a social history of...

The Freedom of Genius

Bertrand Russell: The Passionate Sceptic. By Alan Wood. (Allen and Unwin, 2 IS.) THERE are obvious objections to writing a man's biography while he is still alive. Certain...

VETERAN members of the British Interplanetary Society like this reviewer can hardly avoid a cer- tain smugness at the almost universal acceptance nowadays of ideas which even...

Going Home. By Doris Lessing. (Michael Joseph, 21s.) Miss LESSING is a novelist of sufficient quality for those who react to her at all to want. to read all her books. I do not...

The Thing Desired. By Lalage Pulvertaft. (Secker and Warburg, 16s.) Tower in the West. By Frank Norris. (Gollancz, 15s.) The Short Reign of Pippin IV. By John Steinbeck....

By IAN NIALL Tun proposal, recently announced, to have mill- stones as boundary markers in the Peak Park was being criticised in my paper the other day. The writer found...

Herons, I have heard it said, walk around a lake or pond keeping their feet in the water, leaving no tracks. This may or may not be true. They are more likely to be in the water...

Drought seems to be no longer an immediate threat to my part of the world. The river rose over- night and salmon fishermen broke their duck, if this expression can be applied to...

Tulips left in the ground deteriorate and are exposed to a subsequent scorching of the leave that ihdicates disease. To avoid this thebulbs must be stored. A preliminary that...

Fables for the Times

SPECTATOR COMPETITION No. 378 Report by Harry Hedgerow THERE should be ample opportunities in this modern world for a new yEsop, for competitors were at no loss for subjects...

SPECTATOR COMPETITION No. 381 Set by Papoose The usual prizes

are offered for an astrological charm for incantation at the summer solstice. Entries, addressed `Spectator Competition No. 381,' 99 Gower Street, London, WC1, by June 1 I....

By CUSTOS WHENEVER War Loan falls below 70 and 24 per cent. Consols and Daltons drop to around 50 there will generally be some press com- ment to remind us that historically it...

By NICHOLAS DAVENPORT IT is not the state of the economy which is responsible for the present \ Demoralisation in the gilt-edged market. There has been no new rise in prices...