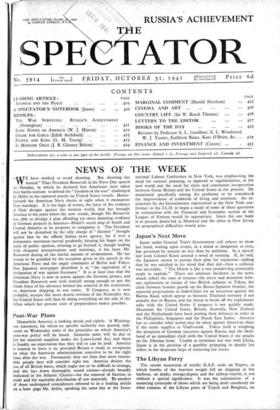 ,W E have worked to avoid shooting. But shooting has started." Thus President Roosevelt in his Navy Day speech on Monday, in which he declared that Americans have taken their...

Japan under General Tojo's Government still refuses to show . her hand, waiting upon events, in a mood as dangerous as ever, but governed by anxiety no less than by ambition. In...

Meanwhile America is looking ahead, and rightly. A Washing- ton statement, for which no specific authority was quoted, indi- cated on Wednesday some of the principles on which...

The recent succession of terrific R.A.F. raids on Naples, in which bombs of the heaviest weight fell on shipping in the harbour, on docks, storage-depots and the...

.It need hardly be said that the continued expansion of war industry lays an added burden on transport; and, vice versa, that if transport is inadequate industry will be...

If anything more were needed to unite the people of France in hatred of the Nazis and to stir the indignation of civilised people in both hemispheres it has been found in the...

Mr. Clough Williams-Ellis and others who have contributed to the correspondence columns of this journal have set a ball rolling which may have some useful effects on the...

The habit of cruelty which is becoming more deeply ingrained among the Nazis by constant practice among subject peoples did not originate in that way ; it was made notorious...

Labour Reforms in the Colonies

The war has not been allowed to check the progressive move- ment for improving conditions of labour in the Colonies which was getting under way first under Mr. Ormsby-Gore (Lord...

AMERICA AND THE PEACE

W HEN we have helped to end the curse of Hitlerism we shall help to establish a new peace which will give to decent people everywhere a better chance to live and prosper in...

N EXT Monday, November 3rd, King Leopold of the Belgians, a captive in his palace at Laeken, keeps his fortieth birthday. For him it can be a day of nothing but depression, but...

German soldiers in occupied territories are far from happY —even

if not as unhappy as they should be. One of them in Norway was recently complaining that Norwegians looked down on them as they would on niggers. " We don't look down

The agitation into which the House of Commons, or part

of it, worked itself last week about the sale of a half-share in Reuter's Agency to the Newspaper Proprietors' Association is singularly hard to comprehend. The House is rightly...

A reference in the House of Commons last week to

an article in the current issue of La France Libre on Germany's oil-reserves draws opportune attention to a periodical which has just closed its first year of existence with a...

The Canadian journalists who visited London last month have taken

home some interesting impressions. One of them, inspired in part by General McNaughton, Commander of the Canadian forces in Great Britain, is that there will have to be an...

Lord Beaverbrook's appeal for waste paper has been well sup-

ported in the Press, and so it should be. To hand over old newspapers, unwanted books and the like to the paper-collect& (if there is one; that may be the chief obstacle) is...

RUSSIA'S ACHIEVEMENT By STRATEGICUS A LTHOUGH they are fighting with undiminished stubborn- ness, no one can fail to see how grave is the position of Rus s ia ' s heroic...

SOME NOTES ON AMERICA

By W. J. HINTON The Spectator's American correspondent drew attention last week to a pamphlet entitled Notes for Your Guidance prepared for British airmen now in training in...

By G. M. YOUNG I HAVE made what to some people may seem the belated decision to set down my own thoughts and feelings about the abdication of King Edward VIII, because I think...

By EDITH ARCHIBALD In his Presidential address at this year's annual meeting of the Classical Association Sir Richard Livingstone referred to " the remarkable figures in the...

By J. R. GLORNEY BOLTON T WO sailors sauntered towards the Moskva. A girl watched them go by. Her yellow hair was closely cropped. Her eyes were luminous and grey. When the...

OWING to the shortage of paper it is more than

ever necessary for readers to place a firm order for The Spectator with a newsagent or direct with the publishing office at 99 Gower St., London, W.C. I.

It is a welcome symptom that Messrs. Kegan Paul should

now be reviving their series in a different and more topical form. The new pamphlets are edited by Francis Williams, one of the few men who really possess a " Today and...

I have always felt that there might be some danger

that those who journey to the next Peace Conference will in their turn be dominated by a single idea and will become as obsessed by the conception of economic solidarity as we...

By HAROLD NICOLSON T HE 'twenties of this century are constantly being upbraided as a period of intellectual laxity and moral decadence. We are assured that our present...

One of the main merits of Balbus is that he

is not dominated by a single idea. It is frequently stated that the fundamental error of the negotiators of the 1919 settlement was that their minds were obsessed by the formula...

Along some such lines as these must our thoughts of

future reconstruction be directed. Sir Frederick Leith-Ross is for- tunately too imaginative a man to allow the work of his com- mittee to be confined to the mere accumulation...

The Management wish to apologise to our many advertising friends who have recently been unable to obtain space in our columns. When, however, it is realised that the recent...

Aftermaths Nothing is more potent to make you forget the less good and pleasant events of today than "the royal aspects of the earth "; and war-years, which have the reputation...

Snakes' Eggs A land girl, engaged in the now ladylike

occupation of pitch- ing " muck " (as Surtees' Pigg always called it) into a farm-cart, disclosed what she took at first to be some sort of fungus or mushroom. Then it appeared...

4$ Alexander Nevsky." At the Tatler—British and Russian Propaganda Shorts. Alexander Nevsky has previously been shown in London only to the Film Society, and it is a good...

It is an oddity of the year that some of these harvest-fields, from which an unexpectedly large proportion of the bumper crop was salved, look almost as if they had still to be...

In the Garden If ever there was a year when

the curtailing of plants after they have flowered or fruited has brought dividends it is this year. A cottage neighbour has recently been enjoying an excellent crop of broad...

Snt,—Professor GOrka disagrees with my review of the Cambridge History of Poland ; why I cannot understand, for in his letter he " restates historical facts " with which I...

Slit,—I welcome and fully endorse the conclusion drawn by Mr. Philips Price froin my book Soviet Russia " that but for what the Bolsheviks have done in the last twenty years in...

HOME GUARD NEEDS SIR, As one of the men in the Home Guard, I would like to comment briefly on the timely article by a battalion commander in your last issue. " One thing is...

Sm,—In his article on " China and Japan," Sir John Pratt would have us believe now that the Burma Road was closed on July 17th, 1940, " in order that Great Britain might gain...

Snt,—I read with the greatest delight Mr. Canham's eulogy of Notes for Your Guidance. It seems a pity that anything so good and understanding should be limited in its sphere....

Snt,—Miss Denby does not contest the main point I made in my little wrangle with Clough Williams-Ellis: that the vast majority of people would like houses with gardens. It is...

SIR,—Dr. Sanguinetti (letter The Spectator, October loth) may be confident that Lord Horder appreciates fully his pioneer work in Kensington as far back as 1921. But the fact...

SIR,—The letter of Dr. Sanderson-Wells in The Spectator of October 17th under the above title has created considerable excitement among my many correspondents interested in...

- SHAKESPEARE AND THE SOLDIER

Sia,—In your issue of May 9th an R.A. gunner in Sussex begs for a copy of Shakespeare to replace one lost on manoeuvres. One wonders why he didn't ask his girl to spend two bob...

Six,—I have read with interest the article by Erwin D.

Canham in your issue of October 24th, and previous articles in The Spectator on Anglo-American Co-operation. It occurs to me that you may be interested to see the attached list...

Memories of Victorian Oxford. By Sir Charles Oman. (Methuen. Iss.) THIS book kept me up until far into the night. I may be a biassed judge, because my own memories, though they...

The Law of Nations Foundations and the Future of International Law, By P. H. Winfield.—Politics and Law in the United States. By 13 W. Brogan. (Cambridge University Press. 3s....

Death of a Pacifist

THE new introduction—on the Russia of 1941—which Mrs. Webb contributes to a new and cheaper edition of the classic work which she and Sidney Webb first published in 1935...

Poems of a Decade. By A. L. Rowse. (Faber. 6s.) MR. RowsE's poems are interesting less for their achievement than because they illustrate the change of outlook of a genera-...

THESE half-dozen essays, including two of particular note on Death and Fear, by the Regius Professor of Physic at Cambridge, will be read with pleasure and profit by many who...

A FAIR to middling lot, the above ; indeed perhaps only very fair to very middling. Too many batches of novels are like that nowadaysdepressing, when every published work should...

of a Book Token for one guinea will be given ig the sender of the first correct solution of this week's crossword puzzle to be opened. Envelopes should be marked with the words...

SOLUTION TO CROSSWORD No. 136

SOLUTION ON NOVEMBER 14th The winner of Crossword No. 136 is W. Mainwaring Burton, Alderbourne Manor, near Gerrards Cross, Bucks.

By CUSTOS MARKETS are back on the defensive, but are yielding very little ground. Technically, the position is trim, so that the tone really depends on the morale of investors....