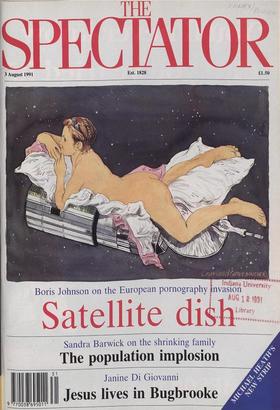 T he European Court of Justice over- turned British law and allowed foreign- owned vessels to fish in British waters and use British quotas. Fears were voiced over the future...

Tiptoeing over the threshold of the Common European Home NOEL MALCOLM U ntil Monday evening of this week, Her Majesty's Government had a policy on European defence. It was...

I have become rather tired of the postur- ing of Imperial Chemical Industries, which has been going on for some months now, since Hanson had the temerity to purchase 2 per cent...

Watch out for Mr Heseltine's green shirt brigade AUBERON WAUGH With these documents also came a leaflet gloating over the new Antarctic Treaty (which apparently binds its...

OF PORNOGRAPHY AND PROTECTION

European pornography is being beamed into used to keep out Japanese competition IT IS SAID that Mrs Thatcher was basical- ly worried about three imports from Europe: foreign...

SOME CHICKEN, SOME KIEV

Stephen Handelman on the great nation of Ukraine and its urge for independence Kiev PRESIDENT George Bush's brief visit to Kiev on the way home from this week's Moscow summit...

Dennis Deletant returns to a welcome from the much changed Moldavia `AND vat do you zink of Ceausescu's fan- tastic erections?' The question was fired at me in booming tones...

THE DIFFERENCE A YEAR MAKES

John Simpson meets Yasser Arafat twelve months after his friend invaded Kuwait Tunis . THE HEAT in the hotel room wrapped round me like an unwelcome blanket, but shortly...

Sandra Barwick on the declining numbers of children in the richer nations MY paternal grandmother, who married before the first world war, produced six children, of whom four...

HERITAGE THROWN TO THE PIRANHAS

Gavin Stamp wonders if Jocelyn Stevens is the right man to head English Heritage THE NEWS that Jocelyn Stevens, Rector of the Royal College of Art, may be Lord Montagu's...

Janine Di Giovanni investigates the Jesus Army, which is taking over businesses and souls in Northamptonshire THREE dead bodies turned up in rural vil- lages near Northampton...

AT THE BAIL HOSTEL

Wilfred De'Ath found that the months he spent awaiting trial were not quite what he expected ON 7 October 1990 I was arrested without explanation in a hotel room in Southsea...

GALL OF THE TABLOIDS

the latest invasion of privacy THE ABSENCE of a privacy law in this country has many sad consequences. Among the worst is the way in which it allows the media to wreck the...

THIS was the week when the affair of the Bank of Credit and Commerce Interna- tional began to slide into farce. In New York, the district attorney conjured head- lines from the...

I HAD not thought of Mapp and Lucia as a handbook of municipal finance, but I now see where councils like Western Isles learned to borrow money in the market and re-lend it to...

Recovery but, this time, there's no going back into debt CHRISTOPHER FILDES R ecovery? The City assumes it, the Chancellor proclaims it, the Confederation of British Industry...

CAN it be that John Major, the best public relations man the Standard Chartered Bank ever had, is giving his old firm a helping plug? There it was, plain to see, at the news...

Money off the screen .

I AM sad that Channel 4 cannot afford to keep Business Daily on the air. It was my cue for opining on Fridays — looming out of your television screen to call the Abbey National...

Sir: How thankful the people of Gibraltar must be that the United Kingdom Govern- ment has a greater regard for the Declara- tion of Human Rights than have the writers who...

Sir: In 'Down with dodecaphony' (Music, 6 July) Herbert Lomas aimed at producing some sort of evidence for what has been presented as a 'natural' rejection of dode- caphony,...

A place in heaven

Sir: I am very sorry that Monsignor Gilbey has misread or misunderstood my inter- view with him (Letters, 20 July). He did have an opportunity of reading it and correcting it...

. Indulging the Old Lady Sir: Though I share his nostalgia for the waning power of the raised gubernatorial, eyebrow, I think Christopher Fildes (`Tumbling the Old Lady' 27...

Sir: At long last I am delighted to see that you have got rid of that tiresome bore Wallace Arnold. For some time now this self-styled wit has been writing one and the same...

Sir: In the 17th century, a Highland Scot defined his 'country' as the land within the horizon of the surrounding hills, inhabited by people whom he knew by name and lineage and...

Sir: I have great respect for the British and their ways. However, I really could not let A. N. Matthews's well argued but erroneous defence of Britain's food in comparison to...

Sir: Why does John Charmley use the word `revolting' to describe my bulldog, Bosun, who adorns the jacket of Phillippe Daudy's book Les Anglais (Books, 13 July). Mon- sieur...

history, receiving the same kind of treatment accorded to royalty or superstars: public adulation, pri- vate denigration. Scandal swirled just below the surface of their lives,...

Lapwings in display salute the earth they're swishing to with a three quarter roll list as a fencer's wrist; and it's in that image your song takes me - above all, the cadence....

Old-fashioned and full of charm

Anita Brookner LETTERS FROM CONSTANCE by Mary Hocking Chatto & Windus, .£13.99, pp.215 hen women were virtuous, women wrote novels like this. I realise that this statement...

Books are no compensation

David Nokes N o paradox in Swift's long career as preacher and polemicist, satirist and hoax- er, is more teasing than his assumption of the role of 'Hibernian patriot'. In...

Beryl Gray GEORGE ELIOT: COLLECTED POEMS edited by Lucien Jenkins Skoob Books, f9.95, pp.481 o n 1 January 1865 — that is, a little under halfway through her career as a writ-...

Benefiting from a military point of view

Jasper Griffin THE PUNIC WARS by Nigel Bagnall Hutchinson, £19.99, pp. 355 I t is a mark of a civilised society when its military men read books; much more so when they write...

Awe in the presence of ordinary things

A quart of ginger-beer in a 'stone' jar (A salt-glaze jar) with a glassy black screw top, Red rubber ring, shoved in a saddle-bag Then ridden bumpily up a hill in Montgomery....

0 ne of the more unlikely places in which I might have imagined writing this week's article is Heathfield Hospital at Ayr in Scotland. I was on a brief working holi- day in the...

Home and away Peter Phillips T he planning department at the Proms has launched this year's series with a suc- cession of 'home and away' concerts. This well-worn formula...

Papal pageantry Roderick Conway Morris I taly's prime minister, Giulio Andreotti, had to appeal to his defence minister last month for the loan of 2,500 conscripts, not to...

Windsor soap John Diamond t's summer and the earnest documen- tarists and the gay young things from Light Ents are all, respectively, in Tuscany and Ibiza, leaving the field...

Out west Taki T he only town I missed during my Odysseus-like peregrinations of last month was Ithaca, New York, where a noodle- brain I plan to give a knuckle sandwich to...

Martyn Harris is on holiday.

Saved by the gong Zenga Longmore A the reader may or may not remem- ber from last week, we left Uncle Bisi gloating over the contents of my Jamaican friend Mrs Starman's...

Down by the riverside Jeffrey Bernard am writing to you from the eighth floor of a block of flats halfway between the House of Commons and the Tate Gallery. I can even see...

AUGUST, a very fine month for feasts. St Alphonsus Mary de Liguori, a great preacher; St Eusebius of Vercelli, starved to death in his own home by the wicked Arian emperor...

12 YEAR OLD SCOTCH WHISKY COMPETITION Discoveries Tom Castro I n Competition No. 1687 you were in- vited to give a description, tinged with disapproval, by a historical or...

T he Sicilian Defence is Black's most aggressive, ambitious and popular counter against 1 e4. Conventional wisdom used to hold that if Black Could survive the White attack he...

At Leeds, in the first Test match, Pringle made a defiant 27 in over two-and-a-half hours; at Lord's in the second his 35 took an hour and 50 minutes; at Trent Bridge he was...

Q. I have never been able to bear any kind of whistling, be it tuneless or tuneful. I now find that in my new job I am sitting virtually next to someone who whistles. It is...