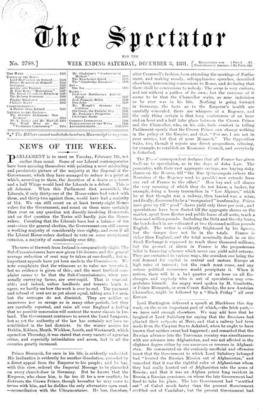 Lord Hartington delivered a speech at Blackburn this day week,

on the more important part of which,—the Irish part,— we have said enough elsewhere. We may add here that he laughed at Lord Salisbury for saying that the Russians had planted...

The news of the week from Ireland is comparatively slight.

The Sub-Commissioners have now given 146 decrees, and the general average reduction of rent may be taken at one-fourth ; but no important appeals have yet been made to the...

A RL I AM E N T is to meet on Tuesday, February ith, not earlier than usual. Some of our Liberal contemporaries have been amusing themselves with painting a most misleading and...

The Tines' correspondent declares that all France has given itself

up to speculation, as in the days of John Law. The peasantry, with their vast aggregate savings, are buying risky shares on the Baurse, till "tile Rue Quinca,mpoix (where the...

Prince Bismarck, for once in his life, is evidently undecided.

His inclination is evidently for another dissolution, preceded by a direct appeal from the Emperor to his people ; and be bas, with this view, ordered the Imperial Message to be...

Twenty-six Judges and2:30 members of the Bar attended an entertaiument

given on Monday, at the Inner Temple, to Sir George Bramwell, the retired Lord Justice of Appeal. The meeting was remarkable for the sincere cordiality with which any praise of...

Sir Wilfrid Lawson has been the first to declare that

if the policy of the present Government does not succeed in recon- ciling Ireland, as he hopes it will, he would much rather accept "disintegration,"—in spite of the dismay with...

Lord Carnarvon seems to have quitted his nlie of calm

and impartial observer. At Portsmouth on Wednesday he made a distinctly party speech, declaring the present. Government to be at once weak and revolutionary, attributing the...

In the Ti» es of this day week appeared a

long letter from Mr. F. H. O'Donnell, the Member for Dungarvan, announcing with much pomp that "the Conservative policy in relation to agrarian reform in Ireland is now...

Mr. Goschen made a most important speech at Rugby on

Tuesday, in which he stated that he was strongly in favour of enfranchising the soil, and giving more security to tenants,. though not through free sale, which, he held, would...

A great meeting of farmers was held on Thursday at

Aberdeen. It was attended by delegates from 40,000 farmers of Aberdeen, Banff, and Kincardine, and the proceedings were most enthusiastic. The general drift of the resolutions...

Satur- day, at Derby, fall of his usual wit. He compared the state of Ireland under the undisputed Tory rule of fifty years ago with its state now, and said that bad as it still...

A pathetic case was heard before Mr. Justice Hawkins yes-

terday week. John Edwards, a prisoner in Coldbath Fields Prison, sent there for uttering counterfeit coin, had tamed a mouse as a companion, and formed a great friendship for...

The Bishop of Manchester yesterday week convened a synod of

his clergy, not for discussion, but to receive his pastoral ex- hortation not to permit in any church of his diocese a ritual higher than that of the Cathedral. No minimum limit...

In the discussion on the scrutin, de liste, M. Gambetta

said that one of his main reasons for proposing it was to break the power of influential constituencies to besiege their Deputies for appointments. He considered the demands of...

Lefroy was executed on Tuesday, after making a complete confession

of his guilt, and retracting all the rhodomontade so seriously accepted in many quarters as to his concern in the Chatham murder. We observe that a contemporary, not usually...

it will keep Tunis. The question was raised on Thursday, in the form of a motion from the Cle'menceau side to refuse the credits demanded, for the forces, and M. Gambetta made a...

In his speech to his Liskeard constituents of yesterday week,

Mr. Courtney, who is now Under-Secretary for the Colonies, gave a very satisfactory account of the reason of Mr. Sendall's selection for the Lieutenant-Governorship of Natal :—"...

It has been pointed out to us that a sentence

in our " Art " article last week is capable of serious misconstruction. The sentence is one in which it is stated that "Mr. Mudie can and does practically force thousands of...

M. Paul Bert, the new Minister of Public Worship in

France, -received his subordinates in that Ministry on Sunday, and made a speech, in which he declared that in his judgment a Minister of Worship should be neither religious nor...

PRINCE BISMARCK ON HIMSELF.

I T is not very difficult, when one recalls Prince Bismarck's. history, to understand his attitude towards the new Par- liament. He has never been an admirer of Parliaments, and...

TOPICS OF THE DAY. •

LORD HARTINGTON ON IRELAND. T, ORD HARTINGTON'S speech at Blackburn on Saturday was not, in any sense, a great effort. But it was, perhaps, something better, it was the speech...

T HE Times complains of the great amount of political. speechifying now going on ; and Punch, following suit,. draws a caricature of John Bull in the Parrot-house at the...

W E can hardly remember a speech better worth the atten- tion of those who are interested in watching the , develop- latent of European civilisation than that in which. M. Paul...

T HE expression used in Sir Henry James's speech at Bristol which was supposed to apply chiefly to Lord Randolph Churchill,—the "gutter children of politics, —was intended, of...

THE BROAD CHURCH ON RITUALISM.

T HE controversy between Mr. Llewelyn Davies and our- selves seems to us to be pretty well exhausted. He has declined to notice more than one piece of new evidence which we...

T HE best evidence of the necessity for inflicting a heavy punishment on persons convicted of bribery, is the shock which it probably gave to most of us to read that for this...

T HE trials both of Lefroy and of Guiteau raise an uncom- fortable question as to the amount of personal coherence in the "mind-staff,'—to use Professor Clifford's phrase in a...

I T is said that a recent experiment of Messrs. Longmans, the republication of Lady Brassey's "Voyage in the ' Sunbeam ' " at sixpence, has been a very great success, upwards of...

A PICTURE FROM IRELAND. [FROM A CORIIESP0NDENT.3 AT the southern extremity of Ireland, at the head of a land- locked bay, against whose outer barriers the Atlantic hurls...

[TO THE EDITOR OF THE "SPECTATOR."] SIR,—My name has appeared so often in the controversy be- tween Mr. Llewelyn Davies and the Spectator, that I think you will allow me to say...

THE RIDSDALE JUDGMENT: NEW EVIDENCE. [To THE EDITOR OF THE "SPECTATOR."] Sin,—You ask me for explanation on two points :— 1. I wrote, "The arguments were duly catalogued in...

ONE WORD MORE ON THE " VESTIARIAN CONTROVERSY."

[To Tam EDITOR OF THE "SPECTATOR."] SIR,—As a further illustration of my friend Mr. Davies's position, that a church inventory is no proof of actual user of the articles...

[To THE EDITOR Or THE "SPECTATOR.") Sra,—If you do not think the subject of too little consequence to merit a small portion of your space, I should be glad to ex- plain...

[To THE EDITOR Or THE' 'SPECTATOR.") SIS, — llappily for me, I have nutuy friends amongst the Broad- Church school, which, happily for the Church, exerts its due in- fluence...

[To THE EDITOR OF THE " SPECTATOR."] Sin,—In your article of November 26th, p. 1,493, defending Mr. Gladstone, you have stated erroneously the facts as to the Ewelme case in...

THE SEA.* ONE good result seems likely to follow from the mutiplication of picture galleries throughout London, the habit, that is, of forming collections of works which have...

PROFESSOR RAWLINSON'S ANCIENT EGYPT.* A BOOR like the History of Ancient Egypt shows how well de- served is the high reputation gained by Professor Rawlinson for patient and...

" I WANT to be something !' said the eldest of five brothers. I don't care how humble my position may be in society, if I only effect some good, for that will really be...

• Don John. By Jean Ingelow. London: Sampson Low and Co. "Ix is in the interest of those to whom I speak, that I should read beautiful books," writes Madame de Sevigne. How ex-...

MR. WAUGH'S SERMONS FOR CHILDREN.* IN the days when the

present writer was a child, good people were strict Sabbatarians, and one of the few enjoyments of the young, on a Sunday, was a picture Bible. Those pictures excited the...

"OLD OSCAR " (a dog-hero already known to many readers) may fairly be ranked with the " Rab " whose name Dr. John Brown has made a household word. He was a collie, a tribe which...

and the scholarship, at -once ingenious and sound, which Professor Postgate has brought • to bear upon these Select Elegies of Propertius, raise his work much above the level...

CHRISTMAS BOOKS. The Heart of the White Mountains: their Legend and Scenery. By Samuel Adams Drake. (Chatto and Windus.)—It is just possible that some English readers may...

Two books which have stood too long upon our shelves,

and which, we mast now dismiss with a notice quite inadequate to their merits and importance, are Prehistoric Europe, a Geological Sketch, by James Geikie, LL.D. (Stanford) ;...

or this book will suggest its scope and purpose. It

is an adaptation for British boys and girls of an American work that has acquired considerable popularity.

The Boke named The Gouernour, deuised by Sir Thomas Elyot,

Concrete Buildings for Landed Estates. By J . . Birch. (Pettitt and

Co.) —The author of this little work advocates the use of con- crete as an inexpensive material for effecting improvements, and in building and rebuilding on landed estates. The...

Galpin, and Co.)—This is a well-compiled and capitally illus- trated account of the northern capital, its history, its people, and its places and buildings of note.