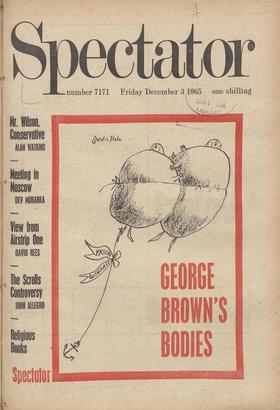 — Portrait of the Week— THE THREAT of an explosion in

Comrades Confer MA URICE GENT writes : At times it might have been a meeting of the parochial church council in a lower-middle-class suburb. There was a cosy mum with a...

The General's Fading Splendour DON COOK. writes from Paris: Whatever the percentages in the outcome of the French presidential election, several funda- mental shifts and...

Div MURARK A writes from Moscow: Mr. Michael Stewart's trip was over before it began. The fault is not his that he has been com- pelled to appear as one of the also-went-to-...

Down on the Campus MALCOLM BRADBURY Thoughts on Festivities One year's subscription to the 'Spectator': £315s. (including postage) In the United Kingdom and Eire. By surface...

Strike Me Pink CHARLES CURRAN writes : Few people buy the Sunday Citizen. It is Britain's oldest Socialist paper, and its sale now is 259,000. That is 23,000 more than it was...

Adlai Stevenson and Hanoi By ARNOLD BEICHMAN There has been a great deal of pressure on me in the United States from many sources to take a position—a public...

I had a wonderful time. 1 went with Elaine Snitch and her friends. I would have liked to have met the Princess and her husband but they were surrounded by admirers.—Thomas Cole,...

From MURRAY KEMPTON NEW YORK T HE end of Floyd Patterson was both appointed and not to be resisted, being a bull- fight where the bull was sixteen pounds lighter and eight...

The Conservatism of Mr. Wilson By ALAN WATKINS S ome months ago—in June to be exact—the word `MacWilsonism' was coined in these columns. It was pointed out then that Mr....

And Quiet Flows the Clyde

By D. W. BROGAN I N the same week, a group of sullen but not basically rebellious shop stewards in Glasgow recently took a tongue-lashing from an English and Labour minister;...

ALLEGRO By JOHN Nearly twenty years ago an Arab shepherd, on the trail of a lost goat from his flock near the north-western shores of the Dead Sea, stumbled upon a cave...

Opposing the General Of the candidates standing against General de

Gaulle, M. Francois Mitterand is likely to clean up most of the opposition votes. If he collects less than 25 per cent he will have done surprisingly badly. His candidature,...

Walter Monckton, of all the men I have met in my public life, was the gentlest and the best loved. So even though the tiny village church at Folkington in Sussex is somewhere...

To get the best, or indeed any, results from Socialist ministers you have to beat them regu- larly like women and gongs. It is becoming painfully clear now, that Mr. Wilson's...

Sad Reading There are admirable people on the Press Council,

but I wonder if they could not employ their time more fruitfully. The annual report issued this week makes sad reading as one ploughs through the accounts of the cases of...

O NE of the minor irritants of the Rhodesia situation is that events always happen on Wednesdays. For a weekly like the Spectator this is the worst possible time. Our function...

In my occasional appearances as a poor man's Peter Simple I fire salvos in the direction of what I call the Nanny State. Mr. Fraser is, although you wouldn't think it, the...

Over 'the Border SIR,—People in Northern Ireland 'have exactly the

same electoral system as Great Britain to make it so easy for their change of mind to have an immediate effect.' ('Letters to the Editor,' Novem- - ber 26.) What an...

Ben Gurion's Fall SIR,—Allow me first to call into question

the extra- ordinary complacency and the not so uncommon (in Israel) self-righteousness of Mr. Sherman's letter about my November 12 'article ('Ben Gurion's Fall') by pointing...

SIR,—Mr. Osbert Hastings's admirable article 'The Priest and the Layman,' in your issue of Novem- ber 5, was devoted in part to the plight of Danilo Dolci, who faces charges of...

mary of the present situation of the United Nations vis-à-vis Chinese representation ('Knock on the Door,' November 26) neglects two salient points. He omits to mention that on...

A Song in the Bath SIR,—Before Quoodle quits Gower Street,

could he answer a question which has been teasing me ever since I read (in the Spectator for August 13) that he sang John Betjeman's 'Subaltern's Love Song' in his bath? To what...

Sia,—Your reference in 'Spectator's Notebook' of November 19, commenting on our annual ,Military Balance, suggests that 'It would be most valuable in the proliferation debate...

SIR,-1 seldom comment on notices of my own books, but in his review of The Long Result Vernon Scannell makes a point which I think will not bear close examination. In regard to...

SIR,—A year ago you were good enough to publish a letter about the work of the Kay King-Hall Memorial Fund, which helps with the education of African children in Commonwealth...

SIR,—As one who has tried dancing, disliked it and given it up, how much I agree with Alan Brien and how swinish do I find the idiotic incompre- hension of dancers when it...

SIR,—May we, once again, invite your readers to send a Christmas or New Year greeting to some of the many South Africans who are in prison because of their opposition to...

BALLET Juliet Seymour W E have seen four Juliets since the Royal Ballet's happy return to Covent Garden; or rather, one Juliet and three interpretations of the heroine of...

Gripping Rat King Rat. (Columbia.)--Sands of the Kalahari. (Plaza.) Both `A' certificate. I N a week as cold as this it was odd to see on the same day two films in which the...

The Box at the Opera M usic programmes on television have to con- tend with two enemies: the manufacturers, who persist in fitting television sets with tiny loudspeakers...

BOOKS The View from Airstrip One

By DAVID REES 'NE might speculate,' remarks Professor O ‘,./Richard Hoggart, in his introduction to this new edition of The Road to Wigan Pier, which is suitably accompanied by...

Selected Letters. By Mark Gertler. Edited by Noel Carrington. (Hart-Davis, 63s.) IN her Memoirs Lady Ottoline Morrell described how she first met Mark Gertler when he was still...

The Great Chinese Travellers. Edited by Jean- Rugoff. (Cassell: Caravel Books, 25s.) IF there's one thing even less profitable than a closed shop, it's a closed mind. If the...

Th e Eye of the Scarecrow. By Wilson Harris. (Faber, 16s.) THERE must be a generation (perhaps more than One) that has learned its response to Edith Wharton from Kingsley Amis's...

Light on C. S. Lewis. Edited by Jocelyn Gibb (Bles, 16s.) Anyone today who proposes to take education seriously will inevitably find himself thinking of the problem as one of...

The Debate Continues By ROBIN DENNISTON H onest to God, one might have thought, has come and gone, in a sense already super- seded by Dr. Robinson's own revisions and re-...

So enormous is the output of Max Weber's fifty-odd years of life that through nearly half a century successive parts of his work have kept on appearing at intervals. The present...

Twentieth-Century Defenders of the Faith. By Alec R. Vidler. (S.C.M. Press, 9s. 6d.) DR. VIDLER's study is an interesting book with an interesting title. For all the...

THESE poems are sayings of Jesus, printed with- out omission or addition from the Revised Standard Version of the Bible, but set out in such a way as to show their very definite...

The Institute and Mr. Callaghan By NICHOLAS DAVENPORT T HE eagerly awaited Economic Review of the National Institute of Economic and Social Research finally appeared this...

As a reader you may have the Spectator sent for a year to your friends, in any part of the world, as your Christmas or New Year Gift for almost half the normal subscription...

By CUSTOS rr HE setback in markets is no reason to sell 1 good equity shares at the present time. At the same time there is no reason to buy them except when they fall to...

By LOTHBURY BE delayed accounts of Bain and Hodge for I the year ended May 31, 1965, disclose that during the past year the company made a number of acquisitions, all of which...

Border Lines By LESLIE ADRIAN Russia? Ten questions. No picture. No other documentation. Twenty-four hours' turn-round. Citizens of the USSR need a visa to enter Britain....

By ALAN BRIEN Reading any of the classic works on wit, hum- our and laughter by Spencer, Bergson, Freud or, most recently, Koestler, you can soon see'.where this illusion...