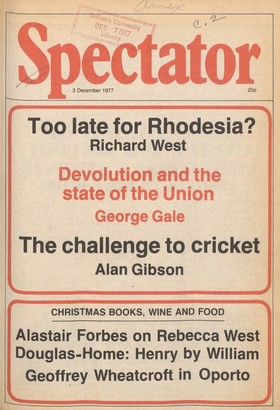 No solution without war

There are two fundamental awkward Rhodesian truths Which neither Mr Smith nor Dr Owen finds easy to accept. The first — more unpleasant for Mr Smith — is that white Power and...

Gone for a beswick Ferdinand Mount I don't know if the name Socrates means anything to you. Ugly-looking type, Greek extraction, came to a sticky end, had this weird theory...

The latest events in Fleet Street may yet be seen as historic. There have been two Changes of the highest significance. One is the new attitude of managements. Once, the...

Arts in the class war Auberon Waugh Mr Enoch Powell, in a recent article in the Daily Telegraph, drew attention to an important influence in human affairs which he called the...

Too late for a settlement?

Richard West . Salisbury The Wimpy Bar at Victoria Falls (15 per cent reduction for servicemen in uniform), has a sad slogan stuck on the cash register: `Go forth naked — and...

Anthony Mockler The Ogaden war is a fascinating affair for the student of military history. It is, I think I am right in saying, the only open war directly involving two...

Will the Arab rejectionists triumph?

Abbas Kel id ar Until President Sadat undertook his unprecedented and dramatic trip of peace to I s ra e l, the 'rejectionise front of the Palestine Liberation Organisation...

Peter Hebblethwaite Mr Gierek is in the business of managing Poles. He does not fear the verdict of the electorate, since the electorate is not free to oust him. He knows that...

Edward Pearce In the old days, a patterman or ballad monger confided to Henry Mayhew, `it was sentencing o'Friday and scragging o'Monday.' The patterman was deploring the short...

The end of the cricket establishment?

Alan Gibson The judgment of Mr Justice Slade, assuming it is upheld in the event of an appeal, Will have unpredictable consequences in the world of cricket. Well, perhaps...

How to save the Union

George Gale The devolution proposals now before Parliament could easily end up destroying the unity of the United Kingdom, against the wishes of the great majority of Scotsmen...

Problems at the Mirror

Bill Grundy Newspaper reading is habit-forming. But, as everybody knows who has ever given anything up, even if only for Lent, habits can be kicked. I do hope some people in...

No need for panic Nicholas Davenport The clever young economists whom I rebuked for saying that money was too cheap and that Bank rate must go up have been screaming `Yaboo, I...

Sir: In his defence of Menachem Begin's record as a terrorist in Palestine, and particularly the Deir Yassin massacre, Mr David M. Jacobs says that 'Arab propaganda' was 'put...

Sir: Diane Munday of BPAS. (19 November) considers that all that is needed in a decision on abortion is 'counselling (by lay helpers) to help clients discover what they really...

Sir: The ancient Forest laws placed vast tracts of land beyond the reach of English common law. Gone is that separate and often oppressive jurisdiction which in earlier times...

Sir: If it were not for the disgraceful head line his article was given, Jonathan Beath all's discussion of sociology in schools ( 19 November) might have contributed to the...

Send Waugh to the pits

Sir: How fascinating is the right-wing propaganda of Waugh & Co — so much wittier than that of their opposite numbers in 'Marstribman'. But does Mr Waugh ever leave his Somerset...

Port for the storms Geoffrey Wheatcroft The drive from Oporto up the Douro valley is disagreeable, even in a comfortable car, even today. The road is narrow and serpentine....

Not frozen Marika Hanbury Tenison My business is food, the best of it, eating it, lots of it and the mechanics of how to produce it. I drink wine with the best of them and...

Phillip Knightley Keep the Home Fires Burning Cate Haste (Allen Lane, £7.50) All countries at war lie on principle. They do this not only to fool the enemy but to mobilise the...

Jane McKerron Dance Little Ladies: The Days of the Debutante Margaret Pringle (Orbis £6.75) Getting rid of daughters is a perennial problem. Some societies strangled them at...

Elisabeth Whipp Doctor of Revolution: The Life and Times of Erasmus Darwin. Desmond King-Hele (Faber £12.50) Erasmus Darwin was such a good physician that, when he settled in...

William Douglas-Home The Bird Man Henry pouglas-Home (Collins 24.95) There was once a splendid doctor, with a !red beard and a wooden leg, called Clifford, in East Meon, where...

Patrick Cosg rave There are fewer more interesting and Perhaps instructive contrasts than that b etween the American tradition of the to ti8h, professional private eye, and the...

Peter Ackroyd Beggarman, Thief Irwin Shaw (Weidenfeld and Nicolson £4.95) For those of you who are interested, it's nothing like the television programme. White men in the book...

Benny Green Letters on Literature and Politic s, 1912-1972 Edmund Wilson (Routledg e £12.50) What is the purpose of this or any other review? Is it for the writer to perform a...

Wild dogs and westerns Clancy Sigal Blue Sunshine and The Pack (Warner West End) Although there are more arty and pretentious new releases about this week, the two films that...

Boxed in Ted Whitehead Talbot's Box (Royal Court) Playpen (Theatre Upstairs) Can you live in the polis without bei l l political? To vote, or not, to breed, or no t ': to...

Physical contact John McEwen It is a rare and inspiring sight to see contemporary art of the calibre of Willem de • Kooning's paintings at the Serpentine (till 8 January). The...

Hot stuff Bryan Robertson The London Contemporary Dance Theatre's new season at Sadler's Wells is sufficiently advanced to show the clear progress made by this energetic and...

Unmentionable Rodney Milnes Macbeth '(BBC 2/Radio 3) lphlgenia in Tauris (Kent Opera) We are greatly privileged in this country as far as television is concerned in that the...

Uncharming Richard Ingrarns 'Politics is an honourable profession,' said Dr David Owen on Sunday's Everyman. 'Having worked in politics and in medicine I see no difference...