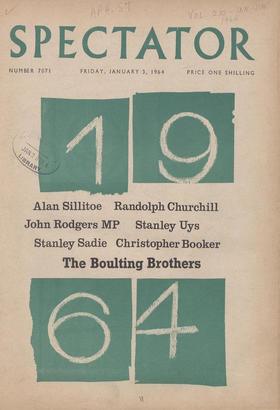 I T is a great pity that the important public debate on whether the Robbins Com- mittee's recommendation for the organisa- tion of higher education should be followed has been...

Christmas week , marred by two disasters, That 120 people were killed on the roads during the four festive days seemed neither to surprise nor shock the British public. Mr....

By D. R. ELSTON rr HERE are just short of a quarter of a million . 1 Arabs in Israel. One of them is Faris, gar- dener at the house on Mount Carmel where recently I lodged....

The Years of the Lion

By JOHN and ROY BOULTING MHE harlot of the arts is in trouble again. The I independent one . . . that is, the one who is not tied to the best houses on the best beats. We...

By DAVID WATT ' l T being New Year, a time of high morality and high TAM ratings, we proudly present a cautionary television tale from the cradle of English Christianity. On...

By RANDOLPH S. CHURCHILL TN 1964 the Western powers will be directed by new leaders. Adenauer is gone, Macmillan is gone, Kennedy is gone. Of the old leaders only, de Gaulle...

From MURRAY KEMPTON NEW YORK `Lya un poente a faire sur l'oiseau qui n'a I qu'une There is a poem to be made on Nelson Rockefeller, Governor of New York, candi- date for the...

The Riddle of Formosa

By JOHN RODGERS, MP 1 - F those girls ever invaded the mainland, they I would get a resounding welcome,' a British journalist said to me as we sat watching the impressive...

Salvage or Salvation in Brussels?

By RUSSELL LEWIS RISES generally arise when important de- cisions have to be made, and it is paradoxi- cally true that the importance of the Common Market has been magnified...

From STANLEY UYS CAPE TOWN HE Verwoerd Government's next international I fight is to save South-West Africa from seizure by the United Nations. This former German colony was...

By R. F. LAMBERT R. DUNCAN SANDYS'S success in replacing with British troops the Greek and Turkish Cypriot forces confronting each other in Nicosia may have averted civil war...

Drilling and Burring By ALAN SILLITOE My sister was already at work, a pert fourteen- year-old know-all (as she seemed then) coming out of the sweet factory on Friday night...

Two Cheers for Forster He is eighty-five now, and with

each half- decade the body of tributes to E. M. Forster seems to grow larger than his own published work. The latest collection (E. M. Forster : A Tribute, Harcourt, Brace)...

Hobbs is dead. The 197 cen- turies, the 61,237 runs, stand in the record book. The Hobbs Gates guard the Oval. As long as men talk about cricket they will talk about the master....

WHEN we are rejoicing be- cause of the birth of a child 2,000 years ago there is something especially shocking about people be- ing choked by the sea or shattered on our roads....

With the end of the political truce after Presi- dent Kennedy's murder, and the coming of an election year, the pollsters in the United States are going to town. On the...

SIR,-1 found some of the comments on the Norwich Union ease in the Spectator's Notebook (December 13) a bit confusing. It seems quite clear to me that there is an enormous...

BELOW THE BREAD LINE

SIR,—In last week's issue your correspondent S.M. writes: 'Thousands of elderly people will die this winter because of inadequate heating and insufficient nourishment. . . . Is...

SIR,—May I add these remarks to supplement and summarise the

interesting article that appeared in the Spectator of December 20. 1. French engineers were pioneers in aviation. 2. British engineers followed the French. 3. Germans and...

SIR,—Randolph Churchill, intentionally or other- wise, maligns a large group of journalists when he says that too many British reporters in America re- write what they read in...

stamps and dividends (Spectator, Decem- ber 20) failed to clarify the matter. CWS dividends are in fact different from divi- dends paid by other companies. Dividends come from...

SIR,—We do not always expect common sense from dramatic critics,

but we are entitled to accuracy, and Mr. Pryce-Jones , ought not to have described a play like The Recruiting Officer, with its freedom from formality in form and dialogue, as a...

SIR,—I am compiling a social-report on the world of the

bedsitting-room tribe. I would welcome any recollections from pastor present members of this type of abode. ARMAND GEORGES 13 Colneinead, Ric kmansworth, Hertfordshire

SIR,—It is a moral issue. I am an opponent of

stamp trading and a supporter of retail price maintenance for the following reasons: 1. There is no such thing as 'something for nothing': anyone who disputes this elementary...

By CHRISTOPHER BOOKER As I walked around the endless twilight corridors of the BBC Television Centre last Saturday night, I felt two unpleasant sen- sations crawling up the...

SUPPOSE you wanted to put on a Christmas season of International Ballet. You have signed up Lon- don's Festival Ballet (this year wandering the streets having been driven out...

Out of the Nursery

By STANLEY SADIE THAT seasonable phrase, `for children of all ages,' ought to fit Humper- dinck's Hansel and Gretel (which Sadler's Wells offer in a new production) pretty...

Two faScinating exhibi- tions in Kensington invite us to consider the Scot- tishness of modern Scots painting and the most dis- tinctive elements in the English. The serious...

By ISABEL QUIGLY David and Lisa. (Academy, 'X' certificate.)—Hallelu- jah the Hills. (Paris It does things to you, to your eyes first of all, which get so used to looking at the...

Destroyer or Preserver By THOMAS PAKENHAM O NE day last July about fifty of the world's most successful town planners, architects and economists held a private Summit on board...

The Arms Debate. By Robert A. Levine. (Har- vard and O.U.P., 52s.) BOOKS on nuclear strategy have a great reputa- tion for arousing people's anger. It is not just that morality...

The urchin wind hangs about the streets, alive in corners at the year's end. Blown and blowing, my mind sweeps its dust out on the chill errand. Now is the time for...

The point of the eagle's introspection or its lonely watch-tower withdrawal is also my point of view. This crab-crawl flight through sand-holes of air and the suction of blue,...

BERNARD SHAW'S cynical assertion, in the Maxims for Revolutionists, that 'democracy substitutes election by the incompetent many for appoint- ment by the corrupt few' was...

By NICHOLAS DAVENPORT THE most irritating point, you will remember, about the report of the Halsbury Committee on decimalisa- tion was that after nearly two years' rumination...

The publication date of the novels The Sparrow and Shadow

of a Sun, reviewed in our columns last week, is January 9.

By LOTHBURY W rut the report from Arthur Guinness and Son for the year to September 30, 1963, comes a forecast of a dividend for the current ycar. This, the directors state,...

By CUSTOS T HE custom of investment writers at this season to give their nap selections for the year is more foolish than usual, seeing that a general election is bound to come...

Back to Trains By LESLIE ADRIAN If only the railways were always comfortable. They are too often cold, dirty, depressing and downright unwelcoming—and at their inefficient...

By ALAN BRIFN 1 had never seen the shiny, black, boot-shaped boxes which are taxis in London. In my dreams, I shouted `cab,' or slipped a dollar to a giant in gold braid and a...

By MARY HOLLAND rr HE hottest thing in last-minute shopping in I the Dublin streets on Christmas Eve was mourning cards for the late President Kennedy. They were the kind that...

SOLUTION TO CROSSWORD No. 1098