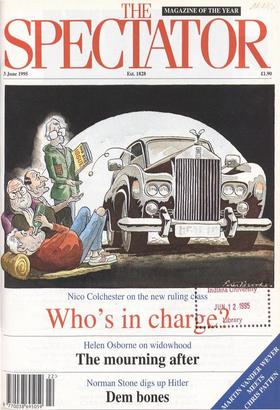 Oh! Oh! What a horrible war!' A i emergency Cabinet meeting decid- ed to send 6,000 more British troops to the former Yugoslavia. This followed the tak- ing hostage of 33...

The importance of peacekeeping missions to the survival of the Army BORIS JOHNSON W e can take it for granted, I suppose, that the Government does not intend to take any of...

U nlike Desert Island Discs, planning a memorial service is something only a mega- lomaniac would contemplate in advance. `I'm sure you'll find it therapeutic,' said a...

Why does our culture fear for Jemima Goldsmith? CHARLES MOORE S ome might take it as a sign of the confi- dence of our culture that every newspaper and most of the people one...

NOW MONEY RULES Nico Colchester anatomises the post cold war world order and argues that its only superpower is commerce, run by a new, stateless, elite RECENTLY, across a...

THE Derby, which was run on Wednes- day in splendid weather, resulted in the victory of Lord Rosebery's horse, 'Sir Visto.' It is a great event for any man to win the Derby...

`WE WERE RELUCTANT TO RIG ELECTIONS'

IT IS strange how we can sound least convincing when we are trying to adopt a tone of sincerity. Take the tributes in Parliament to Lord Wilson. It struck me that the...

Kevin Myers investigates Irish attitudes to the British royal family in the wake of the Prince of Wales's official visit to Dublin Dublin THESE ARE strange and wondeful times...

OUTLASTED LENIN The collapse of Marxism in Africa has led to a revival in the influence of witch doctors, reports William Dalrymple Stone Town, Zanzibar IF EVER a prize were...

HAS LOOPHOLES Anton La Guardia on the ingenuity with which the State of Israel keeps things running on the Sabbath without offending the Rabbis Jerusalem YOU DON'T have to...

THE HIGH COST OF HUMAN EXHALE

Britain's biggest landowner, the Duke of Buccleuch, complains to Simon Courtauld about the state's attitude to stately homes THE FORMER Member of Parliament for Edinburgh...

Looking forward to the day when Londoners ask 'Who's spouting tonight?' PAUL JOHNSON L ast Thursday evening, my wife and I and about 200 other people traipsed to the Tate...

Turn up the flame it's time that the owners learned how to say: No, sir CHRISTOPHER FILDES S tevie Smith's aunt, the Lion of Hull, painted a sheep which looked like a compa-...

Sir: Like Leonard Pearman I also attended the Aldington/Tolstoy trial (Letters, 27 May), my interest being that I had previ- ously spent many hours trying to separate fact from...

Sir: The Magistrates' Association has been concerned about the issue

of television licence offenders for many years. Indeed, the matter was discussed at the Associa- tion's AGM in 1993, when a resolution call- ing for a change in the legislation...

Sir: In reply to Mr Griffin's rude and dis- paraging letter (13 May), may I say that General Wavell presumably had good rea- sons for suggesting that I and my troops should join...

Sir: Posterity will be surprised, not only that we jailed hundreds of impecunious mothers for failing to buy television licences (`Britain's most dangerous women?', 20 May), but...

Sir: Before the interpretations by Nicholas Bethell of the Governor-General of Aus- tralia's Anzac Day speeches become accept- ed wisdom (The great Australian lie', 6 May), can...

Sir: Perhaps I could have the last word on the fascinating issue of whether I am, as Paul Johnson insists, an 'impudent Welsh guttersnipe' (And another thing, 20 May). I am not...

Sir: I have just read Donald Froud's letter (20 May). I appeal to you not to appeal to the average reader. There are quite enough newspapers, journals etc. doing that. James...

Sir: I note that senior feminist, Germaine Greer, complains of an attack by a junior member of the sisterhood, Suzanne Moore, and deplores all such attacks of women upon women...

The hopeless task of making quantum mechanics as entrancing as Jane Austen, as thrilling as sex SIMON JENKINS B ook prizes are as outrageous as school league tables. They...

Where the bodies are buried Norman Stone THE DEATH OF ADOLF HITLER: THE FINAL WORDS FROM RUSSIA'S SECRET ARCHIVES by Ada Petrova and Peter Watson Richard Cohen Books, £17.99,...

Basil Davidson THE BLACK DIASPORA by Ronald Segal Faber, £17.50, pp. 492 T hat mediaeval African sailors floated or were blown across the Atlantic to the coasts of the Gulf of...

Where love has flown

Caroline Moore JOURNEY TO ITHACA by Anita Desai Heinemann, £13.99, pp. 309 D espite its title, Journey to Ithaca is more about exile than homecoming: fulfilments in this fine...

Who was who on the mag

Magnus Linklater EVERYONE'S GONE TO THE MOON by Norman Philip Hutchinson, £15.99, pp. 441 B liss was it in those days to be on the Sunday Times; but to be on the Magazine was...

When the going was good

Jonathan Keates WAR AND PEACE IN VIETNAM by Richard West Sinclair-Stevenson, £20, pp. 365 S omewhere between Billy Russell in a frock coat at Balaclava and Kate Adie in her...

But not necessarily in that order

Too close for comfort

Teresa Waugh BEST OF ENEMIES by Robert Gibson Sinclair-Stevenson, £25, pp. 340 o r any one of us who has ever been affected by even the faintest hint of Francophilia, Robert...

Seen and not heard

National Film Theatre Watching a pile of popcorn Laurence Marks goes in search of the NFT's intellectual back-bone. T he Guardian noted gloomily not long ago that part of a...

A Feast at Midnight (`PO', selected cinemas) Who's taken the coffee cream? Mark Steyn S. tupid is as stupid does,' says Forrest Gump, and the stupid thing that his creator...

Courting success Ursula Buchan I am absolutely not blasé about the Chelsea Flower Show. I have been going each year since 1975, yet there are aspects of it which still seem to...

The perfect measure Ian Hislop I f you were a medieval pilgrim to Chartres cathedral you could get a 'clerke' to explain the stain glass windows to you. We now have Professor...

Very much in love Jeffrey Bernard I have been reading recently, as many oth- ers probably have, about Margaret Drabble and her biography of Angus Wilson. They reminded me of...

A list of names Taki ur gala party on 17 June has an A- list that will knock your socks off, people like Donald Trump and Mort Zuckerman.' This quote appeared in last...

Showing off the Dobermann Carole Morin D angerous Donald gave up guilt for Lent. When I asked for a servant instead of an Easter egg, he couldn't refuse without breaking his...

The source of happiness Nigel Nicolson W hen I was about 12 years old, I returned home from school one day to find that Raymond Mortimer was staying the weekend. He was the...

Hotel du Vin & Bistro WHEN Gerard Basset was at Chewton Glen, I always felt it was worth the journey for him alone. He is, for those who don't know, not a chef but a sommelier....

Unhappy start Andrew Robson MY PARTNER passed my 2+ opening bid in a recent tournament. She had misheard my bid and thought I had opened 1+. A 2+ opening bid shows any hand...

Ups and downs Raymond Keene IN SPITE OF HIS FINE WIN in the Riga tournament in April, Kasparov displayed shaky form in Amsterdam during mid-May. My theory is that he was...

Late Bottled Vintage 1988 Port for the first correct solution opened on 19 June, with two runners-up prizes of £15 (or, for UK solvers, the Chambers Dictionary – ring the word...

Minnows and giants Frank Keating Durban DOWN HERE, the opening ceremony for the World Cup was a moving and touching communion of joy, pleasure and forgive- ness, and final...

Dear Mary.. . Q. A friend and neighbour recently asked if I could do her a huge favour by picking up a dress from a specialist dry-cleaner in Lon- don. As I was driving down...