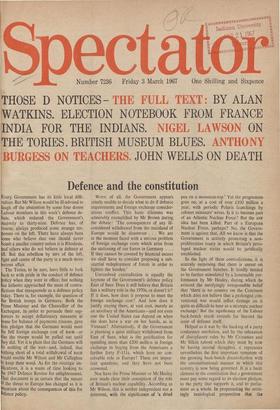 Defence and the constitution

$ Every Government has its little local diffi- ulties. But Mr Wilson would be ill-advised to augh off the abstention by some four dozen abour members in this week's defence de-...

`Yesterday ! What does that mean? Yester- day?' That means that bloody awful day, long ago, before this bloody awful day.' So Samuel Beckett, summing up prophetically for the...

Time for a change

This week's issue of the SPECTATOR has been redesigned, with the expert help of Geoffrey Cannon, from cover to cover. On the front we have reverted to the traditional format for...

MR WILSON had a Dutch treat, returning from The Hague 'very considerably encouraged' about Britain's prospects in the Common Market: many others were pessimistic, however, and...

Mr Wilson and the press

POLITICAL COMMENTARY ALAN WATKINS Shortly after the vacancy in the Pollok con- stituency became known, a Labour Member concluded that the seat would not be held unless the new...

One D'd thing after another

THE PRESS DONALD McLACHLAN Again, what possessed Mr Wilson's adviser to suggest thV the committee I have just men- tioned, which itself sends round D Notices point- ing out...

From the 'Spectator.' 2 March 1867 An unusually overcrowded House even in these times of overcrowded houses, waited impatiently for Mr. Disraeli's detailed plan of Reform on...

India for the Indians

DICK WILSON The loss of some eighty parliamentary seats by Mrs Indira Gandhi's Congress party has sent ripples of alarm around the capitals of the west. Things, however, are...

FRANCE MARC ULLMANN Paris—The General told them : 'It would do you good, gentlemen, to face the sound of gun- fire.' So now we have his ministers, many of them drawn from...

PHILIP GOODHART, MP 'We've got a house down in Hampshire,' the young British army officer said as we walked through the streets of Valetta, 'but we've rented it and I don't...

A TRACT FOR THE TORIES-3 NIGEL LA WSON In the two preceding articles I have argued that, at a time when, for better or worse, the state of the economy dominates all other...

LONDON PATRICK HUTBER The name Barnsbury is not well known to the public at large. It is an area of mainly 19th century housing east of the Caledonian Road, covering 342 acres...

J. W. M. THOMPSON Henry 'Moore is so unquestionably the giant among British artists of his time that it seems merely natural for his proposed gift to the nation of a collection...

MEDICINE JOHN ROWAN WILSON A woman with a history of unstable behaviour was found guilty of attacking her neighbour with an iron bar. Psychiatric examination showed her to be...

TELEVISION STUART IIOOD The advertisements have gone out. The fran- chises in Independent Television are open once more. Between now and their reallocation both the old...

PERSONAL COLUMN ANTHONY BURGESS I was a teacher before I was a writer; I was even a trainer of teachers. The pedagogue, which some prefer to call the pedant, is still in me. I...

A nest of singing birds

BOOKS PATRICK ANDERSON I cannot imagine that anyone today, looking back across the two world wars for the origins of the modem movement in our literature, would seize upon...

RONALD HINGLEY Lenin and the Russian Revolution by Harold Shukman (Batsford 35s) Lenin and the Bolsheviks by Adam B. Ulam (Seeker and Warburg 63s) The fiftieth anniversary of...

DAVID KNOWLES Bosworth Field by A. L. Rowse (Macmillan 45s) Mediaevalists must often regret that the only century of their period within the ken of the modernist is the...

WILLIAM BUCHAN For many years after the war, in Britain and America at least, there ran a continuous trickle of prison books. The bulk of these were POW stories, tales of...

ANTHONY FLEW Essays on Wittgenstein's 'Tractatus' edited by I. M. Copi and R. W. Beard (Routledge and Kegan Paul 50s) Probably this is a book which few, other than its most...

The view from Oceania

DESMOND DONNELLY Half Way to 1984 by Lord Gladwyn (Columbia University Press 29s) Lord Gladwyn's thesis is that both in time since George Orwell wrote 1984 and in the gradual...

HILARY SPURLING It is a marvel to me how the monstrous dumb- show which passes for acting in our opera houses can be accepted year in, year out, without a blush or murmur from...

BALLET CLEMENT CRISP The benevolence called for at the Royal Ballet's annual gala is intended for dancers who have fallen on hard times, though not the sort of hard times that...

Our man in Paris

ART BRYAN ROBERTSON One of the meanest and most insular prejudices of the English, given our better qualities, is to cast a disapproving stare at any native painter, writer,...

Berlin wall games PENELOPE HOUSTON It has taken the Germans a long time, as well as one of Western Europe's more complicated cinema aid schemes, to find a new generation of...

OPERA CHARLES -REID Two more operatic 'digs: With the repertory so thin above ground, where would we be but for willing spades and rubble-raisers? Laid bare at Camden Festival...

NICHOLAS DAVENPORT It was not my intention so much to frighten the poor taxpayer about the mounting cost of government expenditure as to suggest that the local authorities who...

JOHN BULL Despite all the schemes, private and public, since the war, the Lancashire textile trade is 'in deep trouble again. Last week Viyella closed down three mills...

CUSTOS Equity shares have once again demonstrated that they are still in a 'bear' market. They have had a substantial recovery after the Financial Times Index fell from 374 to...

CONSUMING INTEREST LESLIE ADRIAN The man who thought Corfam was a kind of Cockney Oxfam may be forgiven. Du Pont's 'poromeric' leather-substitute is, after all, the result of...

Sir: Having waited in eager suspense for the second instalment of Mr Lawson's cliffhanger on an alternative economic policy for the Tories, I must confess to a certain...

Sir: I was interested to read Mi Lester's comments on job discrimination (24 February) as my work in a busy employment exchange brings me into con- tact with large numbers of...

Sir: Commander Pares is wrong in saying that I 'admit' that his 'theory' that Bacon wrote Shake- speare is worth taking time to refute. What I said was that the newer theory...

Sir: If you ask me. John Wells has got breasts on the brain. Lawrie Wynne GatheNn. 1.1anfair TH, Abergele, North Wales

Sir: 'Why then may not we too revert to Classical

or Gothic when we so choose?' asked Sir Anthony Wagner in your issue of 24 February. The reason is, I think, that when an architect reverts to his 'second language,' his syntax...

The fall of Adam

Sir: I have no wish to enter into the Adam Clayton Powell controversy although I think perhaps Mr Murray Kempton does whitewash the Rev and Hon Mr Powell a little bit. However,...

How to choose an architect Sir: The falsity of revivalist

building is no fal- lacy of the 1960s, it is an economic and functional fact. The preponderance of 20th century building types has no historical precedent. Motor-car factories,...

Sir: The SPECTATOR of 3 February, containing Mr Enoch Powell's 'Britain's Non-Role East of Suez,' only reached me yesterday. I read the article with an interest (although I...

JOHN WELLS It has always seemed to me rather curious that the idea of dying should generally be regarded as so intrinsically comic. Sudden and violent death is probably the...

Stopping the rot SIR: May I reply to Mr Samson

(Letters, 10 Feb- ruary) who imputes to me a censure of dentists! Not so, sir. I well know that dentists labour to teach the young the rules for good teeth. But, Mr Samson...

SIR: I am writing a book about the early history of the cement industry. If any readers have un- published information relating to cement manu- facture during the nineteenth...

Solution to Crossword no. 126/ Azross. I Cantilever 6 Slow

Across I Take a hansom to a Welsh lake for a solution of the mystery (7) 5 Red-coated counter-revolutionary (7) 9 The surprised look of a cat-lover (3-4) 10 How depressing it is...