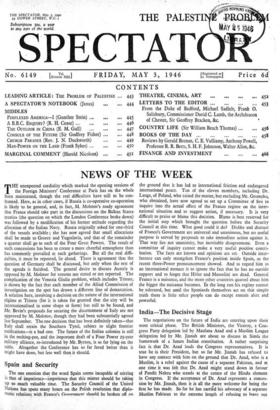 T HE unexpected cordiality which marked the opening sessions of the Foreign Ministers' Conference at Paris has on the whole been maintained, though the real difficulties have...

India — The Decisive Stage The negotiations on the future of India

The one emotion that the word Spain seems incapable of stirring is that of impatience—impatience that this matter should be taking up so much valuable time. The Security Council...

A further stage in the control of nuclear fission was reached this week with the Government's announcement that they are bringing in a Bill to nationalise all future...

The Communist Party's sole claiin to political notice in this country has been its determination to make itself a nuisance. The Labour Party has been among the principal...

In spite of the hostility displayed at the British Medical Associ- ation's special meeting on Wednesday, the prospect of the general acceptance of the principles of the National...

The March contribution to the solution of the housing problem in England and Wales was not impressive-1,458 permanent houses and 4,029 temporary houses. In addition, 7,663...

A PART from the value of its actual recommendations the report on Palestine published on Wednesday has one highly satisfactory consequence. The fact that a committee appointed...

It is not very usual, though far from unique, for

a layman to be chosen chairman of a body like the Baptist Union. It is still less usual for a distinguished lawyer to figure in that position, and perhaps less usual still for a...

It is the price of the late Lord Keynes' -versatility

that his death leaves important positions to fill everywhere. One of the most important is the chairmanship of the Arts Council, which he did • so much to create and foster....

Far too little is known of those admirable institutions, the

Forma- tion Colleges, of which five exist for the Army in Britain and three for the Army in different centres abroad. They represent the final " spit-and-polish" of education,...

I permitted myself a few words of comment a week

or two ago on a fantastic and offensive article in a Soviet paper on the recent visit of the Dynamo football team to this country. I now learn from the Daily Worker, whose...

T HE harvest of death this week has been heavy. The Times on Monday contained obituaries of the Dean of Westminster (the ticket I received on Wednesday for Lord Keynes' memorial...

The disappearance of a London theatre in these days is

a serious loss, and whatever the merits of the moral disarmament plays which the Oxford Group, which has acquired the Westminster Theatre, just off Buckingham Gate, proposes to...

The speech in which the Minister of Health introduced the

National Health Service Bill in the House of Commons on Tuesday was, I imagine, the best he has yet made in the House—certainly the best of a constructive order. Mr. Aneurin...

By R. H. COASE I N the years just before the war much attention was given to the special problems of those semi-independent bodies, such as the B.B.C., which have the task of...

THE OUTLOOK IN CHINA

By E. M. GULL N a few days' time—this coming Sunday if civil war does not I interfere with the official programme—a National Assembly is to meet in China to adopt a permanent...

CONSULS OF THE FUTURE

By SIR GODFREY FISHER. DIPLOMAT'S functions are fairly well known—keeping the A peace of Europe was once said to be the principal one—but a consul's are usually shrouded in...

By THE REV. J. N. DUCKWORTH • That the parade has now been abolished as such has, however, caused universal relief, if not joy, amongst the troops, and even the ranks of the...

MAN-POWER ON THE LAND

By FRANK SYKES T HE recent debate on agricultural man-power was inconclusive. However, it did serve to make public the relevant figures. The plain facts are that agriculture is...

By HAROLD NICOLSON I HAVE been reading this week the Oxford Dictionary of English Christian Names which has recently been published by the Clarendon Press. The dictionary is...

ENCOURAGED by the perhaps unexpected success of Thornton Wilder': By the Skin of Our Teeth at the Phoenix, a ten-year-old play, Our Town, by the same author, has been brought...

THERE are a number of current exhibitions, all deserving more space than I can give them, to which I would like to refer before em- barking upon the depressing task of reviewing...

" The Blue Angel" and " The Love of Jeanne Ney." Shown to the New London Film Society. " Fric-Frac." At the Academy The Blue Dahlia." At the Plaza. "Mildred Pierce. At...

THE CONSEQUENCES OF ZIONISM

by-passes all the issues that matter. To say that " Greece is as much entitled to have a king, and a particular king, if it wants one as Britain is " is to beg the question....

SIR,—As Mr. P. E. Roberts rightly suggests, the policy of expropriating hereditary landowners by means of taxation—a policy which has been long in operation and is now reaching...

LEASEHOLD HOUSES SIR,—The provisions of every Rent Restrictions Act passed since the 1914-1918 War have made it clear that nowadays a man who buys and owns a house resembles...

Sig,—The Government's statement on the future of the iron and steel industry shows the length to which it is prepared to go on the strength of its alleged " mandate " from the...

THE B.B.C. AND SCOTLAND SIR, With reference to the letter

about the B.B.C., from the president of the Saltire Society, I cannot think what he has to complain about. Ever since the days of Lord Reith, the B.B.C. has been completely...

THE SPIRIT OF SERVICE

Stg,—The spirit of voluntary service—so precious because it builds character, thereby blessing both giver and recipient—is in peril. As an artist I naturally have great...

SIR, —Col. Maurice's statement (The Spectator, 19.4.46) that the Govern- ment of S. Rhodesia " has decided to exterminate the wild game " may create a false impression in the...

Sig,—Mr. Graham Watson's in many ways interesting article, under the above heading, tends, in my view, to mislead your readers at more than one point. (a) " Increase in paper...

StR,—Mr. Kenneth Stuart believes that the meagre food allowance to

the German people in our zone (about one-third of what we eat ourselves) will help to bring about repentance and re-education ; " the fact that their stomachs are not...

SIR, —I cannot agree with Mr. David Freeman's criticism of Sir Richard Winstedt's statement that the Malay States were juridically independent. The practice in appeals to the...

Sin,—Mr. Kenneth Stuart is correct in thinking that he will be called un-Christian and inhumane for the sentiments he has expressed in his letter last week, but let that pass....

SIR,—May a South African who was formerly an Englishman discuss your " Marginal Comment " of April 12th? That people should send down deeper and deeper roots into the country of...

SIR,—For over fifty years I have heard, from time to time, in all parts of the world that W. T. Stead wrote " In Darkest England and the :Way Out "; but I am surprised that your...

IT is a melancholy spectacle when good land tumbles into the sea, especially when it takes with it—as some years ago near Cromer—a well- built church ; but East Anglians who see...

A QUESTION OF CALORIES

SIR, — I have read with interest the correspondence in The Spectaro' about feeding in Germany, and the relative amount of calories per person in this country and in Germany. May...

Humanitarians, scientists and naturalists have now, in fruitful co- operation, completed an experiment in the elimination of the rabbit, that enemy No. I to afforesters and,...

SIR,—Mr. Harold Nicolson's " Marginal Comment in your issue of April 26th prompts one to ask: (i) How it is proposed to allocate in future the Rhodes Scholarships which before...

SIR, — Canada is reported to Jiave adopted with enthusiasm a scheme for the voluntary surrender of rations, and depots are now being established all over the country for the...

In My Garden Most gardening critics seem to ;lave synchronised

in their advice to fill up gaps in the herbaceous border with annuals. One of them, writing on behalf of Women's Institutes, suggests the importance of knowing the height to...

Various urban and immigrant people write to me each year to ask where exactly they may hear the nightingale. The general rule doubtless is the further south-east the better....

SIR, — There is a very generally-felt want, because, with one exception, the invaluable publications of H.M. Stationery Office, embracing as they do almost every subject of...

The World of Washington Irving. By Van Wyck Brooks. (Dent. 15s.) Tins extremely fine piece of romantic scholarship would have been worth reading at any time for its own sake ;...

The Writing of Dan McGrew

Ploughman of the Moon : An Adventure into Memory. By Robert W. Service. (Benn. 15s.) AWAY in the early days of silent films few programmes can have passed at the local cinema...

The Revolution in Warfare. By B. H. Liddell Hart. (Faber and Faber. 55.) IT seems ungracious to say that one of the great merits of this book is its brevity. Captain Liddell...

Echoes of Big Ben. By Sir Alexander Mackintosh. (Jarrolds. 18s.) THOUGH at last retired frbm active service, the veteran author of this most interesting volume was able to...

SOLUTION TO CROSSWORD No. 371

By CUSTOS IF further proof were needed that the method of acquiring the Bank of England should not be taken as a precedent for Government policy in relation to nationalised...