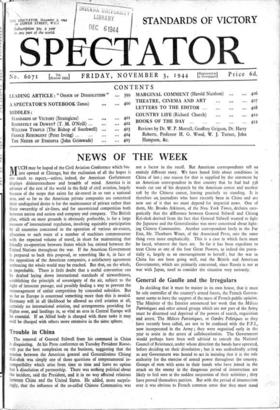 M UCH may be hoped of the Civil Aviation Conference which has just opened at Chicago, but the realisation of all the hopes is too much to expect,—unless, indeed, the American...

In deciding that it must be master in its own house, that it must be sole controller of the country's armed forces, the French Govern- ment seems to have the support of the mass...

The removal of General Stilwell from his command in China is disquieting. At his Press conference on Tuesday President Roose- velt put the best complexion on the business,...

The Armistice with Bulgaria

The armistice terms with Bulgaria which were signed in Moscow last Saturday impose on her a complete reversal of the policy which she pursued throughout the war. She is to...

Bomb-damaged Houses Seldom has the Government had to face such a chorus of adverse criticism as was poured upon it from all quarters of the House of Commons last Friday in...

The declaration, apparently -unanimous, by a sub-committee of the Football Association Council that " football pools are not in the best interest of the nation and should be...

The Bible in Churches

The appearance of the Amended Lectionary for Sundays and certain Holy Days, drawn up by a committee presided over by the Bishop of Winchester, is extremely welcome. The revised...

This much. is clear from Mr. Churchill's speech in the House of Commons last Friday, that in his talks with Marshal Stalin he was able to get a firm understanding concerning the...

IN moving a prolongation of the life of the present Parliament 1 for another year Mr. Churchill explained the problem which the political parties will have to face and stated...

I was a little surprised to hear the Prime Minister

(in the course of his statement on the Moscow discussions) reported by the B.B.C. news service as saying that he hoped a conference between himself, President Roosevelt and...

Dr. Egbert Morland is leaving The Lancet. He joined its

staff towards the close of the last war, and succeeded to the editorial chair on Sprigge's retirement in 1937. It would be hard to think of a greater contrast. Sprigge was...

Dr. Temple is literally irreplaceable, in the sense that no

one can be appointed to St. Augustine's chair of whom it can reasonably be expected, at first at any rate, that he would be comparable to its late occupant. The question of...

Re-reading Pilgrim's Progress during last week-end, I came on phrase

which will certainly recur to my mind on the relatively rare occasions when I listen to the Brains Trust: "Mr. Talkative, the son of one Say-well ; he dwelt in Prating Row."...

Not everyone has yet read Dr. G. M. Trevelyan's English

Social History, for the good reason that not everyone by a very long way can get hold of a copy. For the benefit of those who have not read it, I offer a literary problem based...

T HERE is little I would presume to add here to the Bishop of Southwell's impressive tribute to the late Archbishop of Canterbury on another page. Much has been written in the...

The B.B.C. (through no fault of its own) sent an

odd mis-statement over the air on Sunday evening. The community singing of hymns, at to o'clock in the Forces' programme, is something that I, at any rate, enjoy listening to....

By STRATEGICUS I N raising the question of the date of the end of the war with Germany Mr. Churchill inevitably provides a commentary on the meaning of the word Victory.. No...

By T. M. O'NEILL A MERICAN election campaigns adhere to a ceremonial pattern as inflexible and unchanging as the rules that govern the games of childhood, and the figures have...

By THE BISHOP OF SOUTHWELL (The Rt. Rev. F. R. Barry) N EARLY all has been said that words can say in honour„ in gratitude and in affection about William, by Divine Providence...

By PETER IRVING I AST Christmas I received three Christmas cards from French- men who were living temporarily in England. The cards were rather what one would have expected...

THE NEEDS OF ETHIOPIA

By JOHN GRIMWADE T is now nearly four years since, with British assistance, Ethiopia I regained her independence. During that time the rest of the world has been engrossed in a...

Mr. Hersey, unlike General Marvin, likes the Italians. The citizens

of Adano were gullible, cowardly, mendacious and rather squalid ; but they also possessed their pathetic virtues. The child- like charm (in times of peace) of the ordinary...

Mr. Hersey's book, as I have said, is a tragedy

rather than a satire. It is also a cautionary tale. The frustration of Major Joppolo's gentle-hearted efforts on behalf of the people of Adano is a reflection of the disillusion...

American writers have a gift, which we do not possess,

of portraying simple-minded people in a way which renders their absurdities quite dignified. Had Mr. Evelyn Waugh, for instance, written A Bell for Adano (as well he might) the...

The general public, and those who fought in Africa and

in the earlier stages of the Italian campaign, do not realise perhaps what terrible penalties the Italian people are paying, and will have to pay, for their complicity in...

By HAROLD NICOLSON F OR some months now I have heard people discussing a book about AMGOT, written by John Hersey under the title A Bell for Adano. Only within the last few...

miracle in the Gorbals." Sadler's Wells Belle At the Princes Theatre. THE new Sadler's Wells ballet is another extension of the art of ballet into the world of mime-drama. The...

Paintings by Robert Coiquhoun, Robert MacBryde and Gouaches and Drawings by John Minton. At the Lefevre Galleries--- Etchings and Wood Engravings by David Jones. Watercolours by...

CAN WE AFFORD IT ? Sia,—The article by W. Manning Dacey under the above heading in your issue of October 6th appears in one respect to be gravely mis- leading, and unless it is...

Sul,—In your last issue it was inferred on two occasions, once in a letter and once in an article, that there is something shameful and decadent in the common people's...

Sta,—Mr. D. G. Pumfrett, in his letter last week, had some hard things to say about the working men of this country, which I would not like to pass unchallenged. May I repeat a...

Sin,—Mr. D. G. Pumfrett is rightly concerned about the attitude

of " the less work I do the more will there. be for others " adopted by workers in large firms and many industries. Surely this outlook is a product of the conditions under...

NATIVES AND NEW IDEAS Sim,—Please allow me this final defence

of the misunderstanding of my letter of the 22nd of September. I think that the natives are excellent fellows, but raw, and need the greatest attention which my sect are already...

THE WORLD AND THE AIR "

S IR, —I have been so busy trying to get into the air that I have had little time to attend to more mundane matters. Belatedly, I notice two errors in your otherwise excellent...

Snt,—It is precisely their belief in Anglo-Russian friendship as a main foundation stone for the peace of the world which makes so many men deplore the Russian Government's...

Sia,—I am deeply grateful to Mr. G. Griffith, of the Home Office, for his additional information as to the amount of benefit which a completely paralysed miner would receive...

SIR,—In the "News of the Week " in your issue

of September 29th, a ppears the statement under " The Injured Workman " that the Govern- ment's proposals will abolish " the existing practice with the mass of litigation or...

Sta,—The article in your issue of October 27th, " A Healthy Agriculture," by H. D. Walston, is too much like the curate's egg. The three crops— milk, fruit and vegetables—which...

am a little disappointed that Captain Eric Broadbent should have marred what was otherwise an excellent letter by his statement that " the African in his own country accepts the...

ONE morning this week I stopped for a chat with the farmer whose land runs up to mine from the long valley where the stream winds its was westward before turning to join the...

A Farmer's Nature However, this political trend did not hold

his interest for long. lie thought it was funny business, but it lacked intimacy, that individual- to-individual touch by which the farmer builds up his philosophy of life. And...

SIR,—Janus's note about John Sterling reminded me of a controversy which occupied the literary public some 35 years ago. Somebody had come across a volume of verse by "A. C. S."...

The Garden Everything water-logged this week, and nothing done in

the vegetable garden. But in one odd corner a fine show of sweet violets (Czar), and in several clumps round the pond the shapely little Amaryllis Stemberzia stands up out of a...

SIR,—Mr. Ince-Jones' way of interpreting Nietzsche is a typical example of the very method which I had tried to warn against in my short article. He quotes one of Nietzsche's...

A Day from the Calendar This encounter has not been

the only notable event this week. I have had two experiences, both in one day, of that intensity which comes upon one's whole being like a minor apocalypse, bringing back again...

New Zealand and the War New Zealand: a Working Democracy. By Walter Nash. (Dent. Ss. 6d.) THE social experiments of New Zealand have recently attracted a good deal of...

The Art of Henry Moore

ON Bryher, in the Isles of Scilly, a fognight ago, a doctor and discovered the skull and skeleton of a dolphin, half in the sand. H was excited—and I was, too, as he pointed...

The Shrimp and the Anemone has for its background that remot yet now curiously romantic period known as Edwardian. Mr. L. Hartley describes for us the limited world of...

The Free Churches and the Future

The Free Church Tradition in the Life o! England. By E. A. Payne. (Student Christian Movement Press. 6s.) " IN the generation that has passed since the great Liberal landslide...

one guinea will be awarded to the sender of thy first correct bairn of this week's crossword to be opened after noon on Tuesday week, orember t4rh. Envelopes should be received...

SOLUTION ON NOVEMBER 17th The winner of Crossword No. 293

By CUSTOS ALTHOUGH, in the stock markets, signs eagerly sought often ap from unexpected directions, it is little less than astonishing th gilt-edged stocks and front-rank...