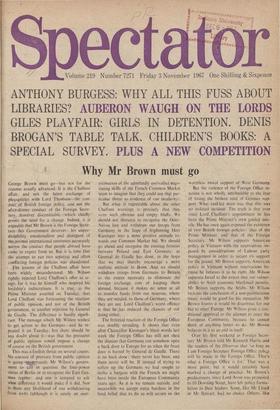 Why Mr Brown must go

George Brown must go—but not for the reasons usually advanced. It is the Chalfont Affair; and -net -the latest exchange of pleasantries with Lord Thomson—the • coff- ducL of...

No damn merit about it

- The theoretical case for reforming -the House of Lords is irrefutable. The power of -the executive in Britain has inc reased, is in- - creasing, and ought to be 'diminished. A...

, London lies on the map lik.a.huge jellyfish, threatening as-it grows to engulf. its surround- ings for many miles in al} directions. The planning strategy proposed this week...

'Legislation will be introduced to. reduce the powers of the Houk of Lords and to eliminate its present hereditary basis,' taid the Ottien's . Speech. The speech also referred...

Mr Wilson and the Lords

POLITICAL COMMENTARY AUBERON WAUGH Long before the Queen's speech on Tuesday, everybody knew that the House of Lords was for the chopper. Mr Crossman's leaks had been so heavy...

CHRISTOPHER HOLLIS Shirley Temple is running as a Republican candidate for Congress on a platform which promises her constituents 'a happier time for all through moral...

AMERICA WILLIAM JANE WAY Four months after the conclusion of the Ken- nedy Round trade negotiations, the Finance Committee of the United States Senate is con- sidering a sheaf...

RHODESIA MALCOLM SMITH Malcolm Smith recently arrived in this country following his resignation as editor of the Rhodesia Herald, a post he had held since 1962. On Tuesday the...

CRIME & PUNISHMENT GILES PLAYFAIR In its White Paper on the treatment of juvenile offenders (August 1965) the Govern- ment committed itself to a policy of no change regarding...

THE PRESS DONALD McLACHLAIST To the layman reader of The Times it may seem odd, as it did to Mr Quintin Hogg, that the newspaper should carry one day a leading article against...

The impact on the outside world

RUSSIA: FIFTY YEARS AFTER-3 TIBOR SZAMUELY Two great social revolutions have shaped modern history: - the French and the Russian. But nothing could be more different than the...

J. W. M. THOMPSON One must beware of growing cynical about society's fumbling attempts to 'plan' the helter- skelter changes which are happening to the environment. A brilliant...

Why all this fuss about libraries?

PERSONAL COLUMN ANTHONY BURGESS 'The fire has spread from your ships,' cries Theodotus to Caesar. The first of the seven wonders of the world perishes. The library of...

MEDICINE JOHN ROWAN WILSON When I was a small boy I vas troubled greatly by motion-sickness. This used to loom particularly large on long car journeys, when it would become...

From the 'Spectator', 2 November, I867—Mr. Anthony Trollope has retired from the Post Office, and his friends and colleagues have commemorated that event by a dinner given to...

Voting with their feet

TABLE TALK PENIS BROGAN I have for some time past been pondering the question of the 'brain drain' and the recent re- port on the subject makes the question even more topical...

Hawkeye and the Indians BOOKS

J. M. COHEN This Oxford edition is definitive. The plays, their variants, letters and notes bearing on their composition and staging and some other introductory material,...

ARNOLD BEICHMAN Over lunch in New York the other day,,,,a young, attractive New Left university girl are-. scribed her unhappiness about the Negro problem. At a recent...

MARY HOLLAND The Bloomer Girls Charles Neilson Gattey (Femina Books 35s) When I was writing a weekly article on fashion and hard up for something, anything, to write about, one...

The Undergrowth of Literature Gillian Free- man introduction by - David Stafford-Clark (Nelson 30s). A woman's-eye view of the ex- tremely wide range of publications devoted to...

WILLIAM BUCHAN The Shadow Land Peter Vansittart (Macdonald 16s) In their very different ways these two books would make a good addition to the library of any intelligent older...

STELLA RODWAY The Battlefield William Mayne (Hamish Hamilton 18s) This is a book where children and adults rival each other, as in life, in the quirkiness and inconsequence of...

ELAINE MOSS Many people believe that background in children's books is a divisive element (out-with- pony-club, in-with-'pop') and so it can be if it is merely a sterile...

DAVID WADE The Owl Service Alan Garner (Collins 15s) Alan Garner's latest novel has many of the qualities of his previous work. It is profoundly imaginative and written in...

6d). Dr Bamberger is an international authority on children's books and his third collection of stories, finely illus- trated by Emmanuela Wallenta, is rich, varied and meaty....

(Nelson 9s 6r1). A small collection of nursery rhymes for which Jenny Williams has drawn outstanding pictures which combine traditional nursery lore with the highest stan-...

Winter's Tales for Children, 3 edited by Kevin Crossley-Holland (Macmillan 30s). A collection of stories, poems and a play for children over nine, newly written by distinguished...

TELEVISION STUART HOOD Something very curious is happening to the English language. It is that in prepositional phrases the accent is coming more and more to be thrown on to...

BRYAN ROBERTSON An artist called Jean Louis makes from plastic, in shallow relief on the wall, large cloud-like shapes, softly rounded in contour, which appear to swell up from...

Samuel smiles HILARY SPURLING Honeymoon (Hampstead Theatre Club) What baffles me about our various well-mean- ing avant-gardes is their prodigious appetite for punishment....

CHARLES REID On the night that Pierre Boulez followed up Berlioz's 'Fantastic' Symphony at a London Symphony Orchestra concert with its so-called sequel and complement, the...

Fish go back PENELOPE HOUSTON Barrier (Academy Three, 'A') The Day the Fish Came Out (Rialto, 'A') The first few shots of Jerzy Skolimowski's Barrier are dazzlingly,...

STERLING -NICHOLAS DAVENPORT This earnest discussion of the 'reserve' status of sterling is becoming tedious and tendentious. I thought Mr Callaghan was somewhat con-...

JOCK BRUCE-GARDYNE The most important and controversial piece of economic legislation in the parliamentary ses- sion which began this week is going to be the so-called...

CHRISTOPHER FILDES- When Mr Ronald Grierson was seconde&from the . great merchant banking house of S. G. Warburg to get the Industrial Reorganisation Corporation under way,...

PORTFOLIO JOHN BULL My starting point this week is the Suez Canal. Hopes of an early reopening have fallen sharply in the past fortnight. As a result, shipping, in spite of the...

CUSTOS The share market has moved through its 400 barrier (Financial Times index), as I ex- pected, and is still moving ahead in a 'bid' feverish state. Phoenix has increased...

Sir: A suggestion for the epitaph on Mr Simon Raven's

Sir: Mr Raven (20 October) did not look care- fully enough. The striking and inimitable epitaph which appeared on the wall above him (it also appears on the floor) in...

Sir: Fie on my dear old friend Denis Brogan! It wasn't the Maclean, it was the Macneil (of Barra in the outer Hebrides from whom I am distantly 'descended) who responded to...

The roots of industrial anarchy

Sir: It is misguided to see the solution to Britain's industrial problem through the implementation of two such . reactionary measures as were suggested in last week's leading...

Sir: No Big Brother or Big Sister is forcing Mr

Nisei Vinson (21st October) to change his drink- ing habits. He has only to take a taxi to his plat* ,.ef drink instead of driving to it. Would he grudge a taxi fare to save...

Sir: Some think that in reaction from the present 'permissiveness'

in general behaviour this country may in due course be engulfed in one of its peri- odical waves of puritanism. I am inclined to believe that the first waves are already upon us...

Sir: I am a great admirer of Sir Denis Brogan's

entertaining and sophisticated 'Table Talk,' but may I, as a humble layman, question one of his judgments last week (27 October)? He says that Brand was a great Speaker. But...

AFTERTHOUGHT JOHN WELLS John Glashan, the creator of tiny..beardecl men mooning about in front of enormous heaps of architecture, is certainly one of the funniest cartoonists...

Sir: With the object of encouraging new talent, Adam, the Anglo-French quarterly, announces the creation of three literary prizes of £100 each, to be conferred at six-monthly...

No. 473: The word game Competitors are invited to use the following twelve words, taken from the opening pages of a well-known work of literature, in the order given, to...