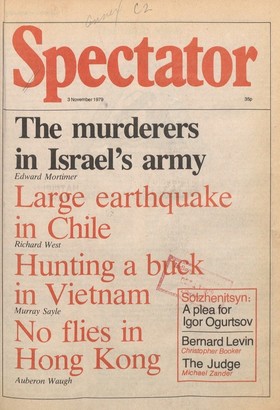 Britain is on the brink of self-sufficiency in oil. But let's not go overboard. Output from present North Sea oilfields is expected to reach a peak sometime in the mid-80s. If...

Whatever its manifest and various defects, absurdities and disadvantages, the Common Market is certainly an excellent device for turning British Ministers of Agriculture into...

Ferdinand Mount How is it that in only five years my water rates have risen from £39 to no less than £135? Because of inflation, obviously. And because the sewer rate is now...

Whatever the reasons for the murder of President Park Chung Hee of South Korea last week-end, his death breaks an old link With two other dictators of South-East Asia, Saharto...

No flies in Hong Kong

Auberon Waugh Returning to Britain a few years ago I complained bitterly in the Spectator about the prominently advertised Disabled Persons' Toilets at London Airport. These...

An embarrassment of riches

Nicholas von Hoffman Washington All the talk has been about money. Early Last week, the oil company lobbyists began calling up their friends on Capitol Hill, the ones who have...

A plea for Igor Ogurtsov

Alexander Solzhenitsyn Two years ago 1 asked the participants in the Sakharov hearings in Rome to take special note of those who were serving long-term sentences. The years...

Barns and his wife, the defendants in the Tranmere baby-farming case, have been sentenced to penal servitude for life. We do not see why they were not sentenced to death, even...

This statement, read at the recent Sakharov hearings on human

rights in Washington, demonstrates Alexander Solzhenitsyn's interest in the movement known as VSKhON, the All-Russia Social-Christian Union for the Liberation of the People....

Richard West Santiago de Chile The governments of Brazil, Argentina, Uruguay and Chile have all employed or are still employing murder and torture against their political...

The murderers in Israel's army

Edward Mortimer Jerusalem A few weeks ago General Rafael Eytan, Chief of Staff of Israel's defence forces (IDF), received his monthly payslip. To his surprise, instead of the...

Hunting a buck in Vietnam

Murray Sayle Lots of my friends have a soft spot for John Wayne's The Green Beret, and so have I. Wayne was a man of uncritical patriotism and not, to put it mildly, much of a...

The employers fight back

Peter Paterson Even a worm will turn, says the old proverb, but when he completes his manoeuvre, what difference does it make? The answer may be that all he can hope for is to...

All fresh air and flowers?

Christopher Booker Next Friday, 9 November, a concert of Haydn chamber music has been billed to be given at St John's, Smith Square, by one of our leading chamber groups, the...

Sir: I have read the articles by Mr Tim Garton Ash with a great deal of interest, as my wife and I travelled by road to Poland this summer and shared some of the experiences he...

Sir: In her review 'Kill or Cure' (15 September), Elisabeth Whipp contends that The Cancer Re ference Book implies that we are in the middle of some monstrous cancer epidemic....

Sir: It might be salutary if Christopher Booker (`The seeds of racism,' 27 October) re-read and tried to understand what his critics wrote in September of last year in reply to...

To say we fell about (journalists' jargon) when reading Richard West's article on 'Secrecy and corruption' (6 October) is an understatement! It is obvious that he is a most...

Sir: I can't think why Richard West should want to drag my name into his review of Thomas Pakenham's The Boer War (13 October). By doing so he muddles an obscure point by...

Sir: In 'A hundred years ago' of 13 October, you describe the disappearance of a respectable young lady from her home in Liverpool. Tantalisingly, you do not inform your readers...

Levin One and Levin Two

Christopher Booker Taking Sides Bernard Levin (Cape £6.50) There has been no more dramatic journalistic debut (or near-debut) in my lifetime than that which took place on 25...

A.N. Wilson Peacock Displayed: A Satirist in his Context Marilyn Butler (Rout ledge £10.95) Peacock's novels summon up a world as agreeable as it is possible to imagine. We are...

Robert Blake The Past Is Another Country: Rhodesia 1890-1979 Martin Meredith (Deutsch E9.95) The very recent past is always the part of history on which there is least...

Stephen Koss Consensus and Disunity Kenneth 0. Morgan (Oxford E15) More by his successes than his failures , David Lloyd George was himself largely to blame for sowing the...

Hugh Montgomery-Massingberd My Blue Notebooks Liane de Pougy (Deutsch £7.50) Liane de Pougy was a famous courtesan of the belle époque, but, though there is some fairly fruity...

Francis King Cannibals and Missionaries Mary McCarthy (Weidenfeld £5.95) The other evening I put a problem to a group of dinner-guests, the majority of whom were writers. It...

Serenades or are they?

Polly Toynbee Sergeant Ola and His Followers (Royal Court) Action Replay (The Orange Tree, Richmond) There's a lot to be said for plays that tell you something you didn't know...

Richard Ingrams The desperation of the ITV companies to win back their audience at any price resulted in at least one act of terrible cynicism. The programmes resumed on 24...

Taki Like Zen Buddhism, nostalgia is interesting at times but of no particular benefit. This past October I've been deluged with it. First came Richard Ingrams's book about...

Jeffrey Bernard There are times, and they're becoming more frequent, when being a hack gives me a pain in almost every part of my anatomy. For the past few weeks I've been...

David Levy The Rio Interzonal has now finished and we are almost in possession of the final line-up for the knock-out series of candidates matches which will determine Karpov's...