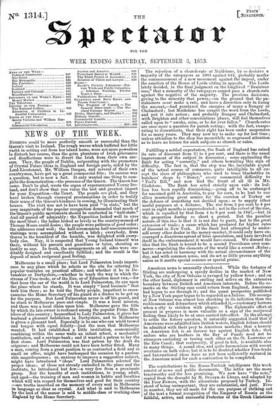 American news is unusually checkered. While the fortunes of Stirling

are undergoing a speedy decline in the market of New York, the city of New Orleans is ravaged by yellow fever ; and on the other hand, diplomacy is smiling and active on the...

NoTirmo could he more perfectly smooth or successful than the Queen's visit to Ireland. The rough waves which buffeted her little yacht in setting out from her island home, were...

The contributions to the Russo-Turkish intelligence this week consist of

news and public documents. The latter are the more trustworthy and the less promising. We now have "the note," copied from the draught by M. Drouyn de Lhuys, and adopted by the...

The rejection of a church-rate at Maidstone, by so decisive

a majority of the ratepayers as 1003 against 643, probably marks the commencement of a new movement against the impost, under the sanction of the House of Lords sitting in...

Melbourne is a small place ; but Lord Palmerston lends

import- ance to any place which he selects as the site for -uttering his popular tractates on practical affairs ; and whether it be in De- vonshire or Derbyshire,—whether to...

Fulfilling a settled expectation, the Bank of England has raised

its rate of discount from 31 to 4 per cent, and there is the usual improvement of the subject in discussion ; some applauding the Bank for acting "correctly," and others...

A railway scheme of some interest to London comes fairly before the public this week for the first time. The North Metropolitan Railway Company obtained a bill last session for...

Qtrsaur VIerourA has this week paid her long-expected visit to Ireland, in company with Prince Albert and their two young sons, the Prince of Wales and Prince Alfred. As we have...

The ceremony of laying the foundation-stone of . the Melbourne Athenteum was performed by Lord Palmerston on Saturday. The town was gaily decorated, and a number of visitors...

Great preparations were made by the good people of Dublin last week to receive their Queen. When it was known on Sunday that the Court had reached Holyhead, her Majesty's...

FRANCE.—The Emperor and Empress continue at Dieppe. Nothing is recorded of their doings beyond the most ordinary occurrences of daily life. They are shortly to visit Boulogne,...

Mr. Levi lately addressed a meeting of the Edinburgh Association for the Promotion of an International Code of Law, and made a statement respecting the Statistical Conference...

on Monday, in his death, at Oakland. near-Portsmouth. Sir Charles was born at Whitehall, in 1782. He entered the Army in 1794; served in Ireland during the troubles of 1798 and...

A telegraphic despatch from Vienna, dated August 29, states that

Prince Gortschakoff was inspecting the line of the Danube when he received the despatches informing him of the Sultan's acceptance of the Vienna note. He returned immediately to...

The colliers at the Dowlais Iron-works, after being out on

strike for six weeks, resumed their work on Wednesday. This result was brought about chiefly through the interference of the shopkeepers, whose interests were materially...

SATURDAY. The Queen went again to the Dublin Exhibition yesterday ; and sub- sequently visited the Earl of Howth. She had been prevented, by the rain, from making an intended...

Srocx EXCHANGE, FRIDAY Arrzaitoow. The long-prevailing anticipations regarding an increase in the Bank of England rate of discount have this week been realised: yesterday, at...

1 Adam Street, Adelphi 30th August 1853. Bra—After constituting the State the guardian of all such children as may be devoid of friends capable of providing, or willing to...

Of the two permanently ." legitimate" London Theatres, one has opened, the other has closed, since the date of our last publication. The opening establishment is Sadler's...

„London 31st August 1853. Sut—I have been waiting several days. in the earn e st hope that some ad- vocate of the working °loges more able andmore:infteential than myself would...

We have repeatedly shown that the effect of the gold-discoveries was augmented to an incalculable extent by the emigration and other circumstances in the state of the commercial...

QUEEN VICTORIA AND WILLIAM DARGAN. THE meeting of Queen Victoria and William Dargan is a great event, although it has become for the day a hack subject of jour- nalism. The...

Tin general tendency of the relations between Great Britain and the United States is towards a better understanding ; not an affi- ance offensive and defensive, according to the...

SPAIN has just made a great concession to England—the privilege of burial in a Prptestant cemetery near Madrid! After having been entreated for half a century, Spain has...

RELATION OF CLIENT AND LAW I EX.

llowEvnn little the Smyth ease can have answered the purpose of the man who claimed the property, it will not be entirely without beneficial result, since it has put in a very...

THE beneficial action of last session was by no means confined to its work in the making of statutes ; the work done by its Select Committees was in some cases not less...

BEARE'S CHRISTIE IOHNSTONE. * IN these days of literary gold-beating, when an ingot of matter is generally hammered out into that acreage of flimsy leaf which sub- s equently...

PRIVATE TRIALS AND Pl7BLIC CALAMITIES. * A. Namur, and interesting if

not a striking account of the family and social distresses inflicted by the French Revolution will be found in these volumes. The first heavings of the coining tem- pest, shown...

THIS volume professes to give a narrative of the kidnapping of Solomon Northup, a free man of colour of the State of New York, by inveigling him to Washington, drugging him, and...

Booms History of the Insurrection in China; with Notices of the Christianity, Creed, and Proclamations of the Insurgents. By MM. Canny and Yvan. Translated from the French,...

etratisgs fint Thu VIIT[k5 filth Cah (f It it I

ILIL THE PROGRESS OP CANADA. In the Report of the Canadian Commissioners of Public Works, pre- sented to Lord Elgin last autumn they state that arrangements have been made for...

On the 28th August, in Osnaburgh Terrace, Regent's Park, the Wife of George Lee, Esq., Postmaster-General of Ceylon, of a daughter. On the 29th, at Worthenbury Rectory,...