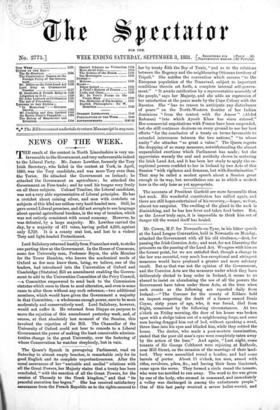 *** The _Editors cannot undertake to return Manuscript in any

The'accounts of President Garfield are more favourable than last week.

His wonderful constitution has rallied again, and there are still hopes entertained of his recovery,—hopes, we fear, almost too sanguine. The swelling of the gland in the neck...

Mr. Cowen, M.P. for Newcastle-on-Tyne, in his bitter speech at

the Land League Convention, held in Newcastle on Monday, attacked the Government with all his old virulence,—first, for passin4 the Irish Coercion Acts ; and next, for not...

T HE result of the contest in North Lincolnshire is very un- favourable to the Government, and very unfavourable indeed to the Liberal Party. Mr. James Lowther, formerly the...

Lord Salisbury returned hastily from Francelast week, to strike one

parting blow at the Government. In the House of Commons, some few University men, Professor Bryce, the able Member for the Tower Hamlets, who knows the academical needs of...

The Queen's Speech in proroguing Parliament, read on Saturday to

almost empty benches, is remarkable only for its good English and its complete unpretentiousness. After the usual assurances of her "amicable and cordial" relations with all the...

Sir Stafford Northcote's speech at the Cutlers' Dinner on Thursday,

at Sheffield, was unpolitical and unimportant. Except that it indicated a good deal of jealousy of any interference by the- Government in the Standing Orders of the House of...

Mr. Gladstone has made another batch of Peers, half-a-dozen of

them, hoping, we suppose,—almost against hope when he contemplates the course of such very prompt deserters from their Liberal creed as Lord Brabourne,—that those who have been...

Dr. Bradley, the Master of University College, Oxford, and for-

merly head master of Marlborough School, is to be the new Dean of Westminster. He is certainly a fit successor in Dean Stanley'a own Arnoldian school of thought, and is the...

The French Republic is not, as yet, inclined to make

Lord Grey addressed to the Times of Saturday and Thursday

last, two letters containing an attack on the principle of com- mercial treaties, in which he attributed directly to our treaty of commerce with France the reaction which has...

O'Donovan Rossa, in the United Irishman, declares that it will

not be safe to travel in English vessels after the present date, for fear of the dynamite preparations which they and their friends have been making to blow up the said vessels,...

In the London University Honours lists, which came out on,

Saturday last, the girls took a very remarkable place. The first, in the English Honours list for the preliminary B.A. examine-- tion was a girl, though one past the age for...

A more ominous symptom of the same kind is the

attack on religion made by M. Paul Bert, in the Winter Circus, on Sunday, at Paris, under the presidency of M. Gambetta, who cheered on M. Paul Bert, and predicted for him a...

Sir John Lubbock's review, at York, on Wednesday, of the

progress of physical science during the last fifty years, was one of the most remarkable and interesting which any President of the British Association has delivered for many...

We observe with satisfaction that the Church Congress is to

hold a discussion at Newcastle in October, on the advantages -and disadvantages of the establishment of a Church by the State. We hold, and have long held, that the advantages...

The Speaker of the House of Commons has been made

a Civil Grand Cross of the Order of the Bath, and will be styled in future Sir Henry Brand, G.C.B. There is a precedent for this somewhat unusual bestowal of dignity in the case...

August has falsified in every way the promise of July.

Since the end of the first week we have had torrents of rain, followed in the last few days by a cold more like that of winter than even late autumn. The harvest has been...

Mr. Auberon Herbert writes a clever letter in the cynical

vein, to Wednesday's Times, asking a number of questions, which he appears to think, ought to make both the political parties wince -equally. These are specimens;—" Can you...

The Guardians of the Poor at Richmond are guardians indeed.

If they were their parents, as well as their guardians, they could 'hardly take a more affectionate interest in their political opinions. .0n 'Thursday week, Mr. Carlile, one of...

THE BY-ELECTIONS. N O doubt, there is often a great deal too much importance attached to the results of By-elections. If anything about large constituencies is certain at all,...

THE CONSERVATIVE ORGANS ON THE FOREIGN POLICY OF THE GOVERNMENT.

T HE St. James's Gazette is greatly exercised by "the dis- couragements of Conservatism." It assures its readers that," while the Radical-Liberal Party is extremely active all...

MR. DILLON'S SPEECH AND ITS SUGGESTIONS.

M R. DILLON has given the most candid and important evidence which we have yet heard as to the motive of the Land League in obstructing the passing of the Irish Land Act, and...

T .4 01W GREY is not afraid to take the bull by the horns: Just when, for one reason or another, most people are bemoaning themselves over the probable or possible failure 9f...

W E have always been amongst those who have anticipated a great political career for M. Gambetta. His indomit- able energy, and his power of enlisting all parties on the side of...

LITIGATION AS IT IS.

T HE announcement, made some months ago, that the Lord Chancellor had appointed a Committee to suggest a simpler form of procedure, aroused very little interest outside the...

S IR JOHN LUBBOCK is more than a man of Science. He is also, what all men of science are not exactly, n human being who likes the humaner side of science,—its influ- ence on the...

THE ART OF FRIENDSHIP.

I N the good old days, before railways and the penny post jostled ourselves and our thoughts into the midst of our friends with as little of ceremony as there often is of...

"IN MEMORIAM." [To THE EDITOR OF THE " SPECTATOB."] SIR,—A portrait from Mr. Carlyle's portfolio not regretted by any who loved the original, surely confers sufficient dis-...

[TO THE EDITOR OP THE "SPECTATOR.") Sut,—I have read with great interest your article on Sir Bartle Frere's pamphlet, and especially that portion of it in which you comment on...

PTO THE EDITOR OF THE "SPECTATOR.") is not to be supposed that the details of American politics are of sufficient interest to English readers of the Spec- tator, to admit of...

[To THR EDITOR OF THE "SPECTATOR. " ] Sia,—Let me add a couple of biographical notes, for the benefit of cat-lovers. I knew a cat, many years ago—a black Tom— rather heavy and...

THE BISHOP OF MANCHESTER AND RITUALISM.

[To THE EDITOR OF THE "SPECTATOR."] Sin,—Unless there is an alteration in the constitution of the Church of England, I do not see that the Bishop of Manchester could do...

[To TILE EDITOR OF THE " SPECTATOR.") SIR, —May I ask leave to supplement my former letter on this subjectby a quotation from Johnson's notes on the passage from " Cymbeline,"...

SIR,—To my regret, my Spectator of the 20th did not reach my hand until the 24th. I was deeply interested in the relation of " Martin's " affection for the persons of the...

THE ESTATES OF THE REALM.

[To THE EDITOR OF THE "SPECTATOR."] SIE, — When will the periodically recurring question of the Estates of the Realm be set at rest ? The Three Estates are properly, the Estate...

EDGAR QUINET.* Tue fault of this book is not a common one,—that it is too modest. Mr. Heath would have done better if he had made a completer book, if he had carried Quinet's...

A CHILD'S HISTORY OF FRANCE.*

THIS interesting and useful volume is the outcome of a good idea. It seems a strange thing to say, but though strange, it is true, that, so far as English literature is...

Ir is long since we have read a book so full of the life of a true spiritual mind,—the mind which really dwells in the atmos- phere of the Christian revelation,—as this...

THAT there should be a "third edition, enlarged," of Mr. de Vere's May Carols is a fact worthy of notice, in this year of radical change and application of old truths to new...

Tns fleeting vagaries of fashion, matter of surprise to no one, and scarcely deemed worthy of more than a passing glance, a smile, or a cynical word, however, are wont sometimes...

work as well as it was possible to do it, under the conditions imposed on him. He has given us an able and fair representation of the personal history and of the philosophical...

PORTRY.—A Decade of Verse. By Margaret Lawrence Jones. (Remihgton.)—This verse is of no common quality, something quite different from the expressionless, common-place rhymes...

Rossini and his School (" The Great Musicians"). By H.

Suther- land Edwards. (Sampson Low and Co.)—We cannot say that Rossini's life is comparable in point of interest for the general public to many biographies of men of less...

An Elementary Course of Practical Physics. By A. M. Worthington,

M.A., F.R.A.S.—The great attention now given to science on the modern side of all good schools is a sufficient reason for Mr. Worth- ington's excellent brochure. All scientific...

The Collected Works of Tames MacCullagh, LL.D., edited by John

Literary Remains of the late Professor Theodore Goldstileker. Vole. I.

and II. (W. H. Allen.)—The late Professor Goldstiicker, who died in 1872, a victim to overwork, was not only an eminent Sanscrit scholar, but was also intimately acquainted with...

Professor H. Morley has added a fifth and completing volume

to his "Library of English Literature," under the title of Sketches of Larger Works in English Verse and Prose" (Cassell and Co.) He begins with " Beowulf " and "Brut," among...

Ovid's Pesti. Edited with Notes and Indices by G. H.