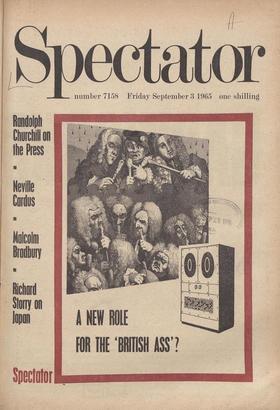 — Portrait of the Week- SEMEMBER CAME IN with a long - range

forecast of gales and frost from the Met. Office, Messrs. Wilson and Heath returned from their summer holidays, and in spite of the new half-cock end- of - August Bank Holiday,...

MHE importance of the four autumn con- ' ferences (the TUC and the political parties) has increased very much in recent years. Full television coverage now trans- forms them...

STRIKES Time for Trouble-shooters MAURICE GENT writes: Mr. Harold Wilson for at least once in his life seems to have acted first and thought later. This is normally the last...

The Germany of Tomorrow A Survey on the Eve of the German Elections Contributors include RUDOLF AUGSTEIN, SARAH GAINHAM, PROFESSOR GOLO MANN, D. C. WAIT, GORONWY REES and...

Living in a Vacuum DON COOK writes from Paris: . It would be a little reassuring to think that President de Gaulle, as he paces his country garden at Colombey-les-Deux-Eglises...

The Real _People BILL BUTLER writes: Burroughs would have been lost . . . Edgar Rice Burroughs, that is. Since the days of his novel The Warlord of Mars things have changed in...

Sales and Sex RANDOLPH S. CHURCHILL writes: When I was so rudely interrupted—to para- Phrase the immortal words of Cassandra im- mediately after the Second World War—I was...

From MURRAY KEMPTON NEW YORK M R. ARTHUR SCHLESINGER'S memoirs of his service to President Kennedy seem to have been so roundly and so curiously denounced as to frighten Mr....

W ITH the announcement that the inquiry into the Evans case is to be in public one more victory is chalked and to those who have fought so patiently and so long to see that...

At The Oval An unkind correspondent wrote, a few weeks

ago, that it was a good thing that I was not a selector. I disagree. I would make an excellent selector. To start with I would not pick Mike Smith as an Australian tourist, much...

The Rains Came Perhaps because I am more cussed than

the other critics, I enjoyed the dour strokeless bat- ting against excellently tight bowling which was the story of the first two innings at least as much as the dash for...

A New Role for the 'British Ass'?

By JOHN MADDOX I F the first tang of autumn is a remincitr to swallows to take themselves off, it is also a Sign to those of us who stay behind that the annual meeting of the...

Kashmir The terrible comment on the fighting in Kash- mir

is that the situation will almost certainly have to get worse before it can get better. The United Nations, powerless to send in a peace force, finds that even its appointed...

Tailpiece Many unpleasant things were said at the last general

election. One appeal was so nauseating that I filed it for future comment. Lord Gardiner, who within the week was Lord Chancellor, said at Brentford on October 13: What we can...

Pioneer It is the fate of brilliant young innovators to

become respectable institutions in their old age. Le Corbusier escaped this because of his own persistent inventiveness and because of some- thing prickly and sardonic in his...

What Evashova Began By DESMOND STEWART I F Peridelkino, the writers' village, is pub-less, so almost is Moscow. Russian friends, report- ing that youth groups had spontaneously...

Bank Holiday Note Connoisseurs of the inspired misprint will not,

I hope, have missed the reference on The Times leader-pages on Monday to the problem of 'apparently frivial' disputes in industry. I like this word. I hope it is not trivolous...

By RICHARD STORRY M R. SIIIGEMITSU and his Foreign Office aides wore black top hats and morning coats. General Umezu and the other representatives of the Supreme Command were...

&I, —Although not a Labour party member I, like Mr. Pomeranz, voted for Mr. Wilson last time, so I qualify for the sticker Mr. Brien refers to, 'Blame me, I voted Labour.' In my...

SIR, —A lot is talked about the Dutch success in the integration of Indonesians in their society. What is overlooked, when trying to draw parallels with British immigrants, is...

The Man Who Was Shakespeare SIR,—May I correct at least

some of the misrepre- sentations in Mr. Seymour-Smith's review of my book (August 6). He takes me to task because I have not 'stuck to facts' (what Shakespearian biographer ever...

SIR, —As a former member of the Colonial Service who, alas, failed to attain 'Establishment' status (not even an MBE) I am saddened by Mr. George Edin- ger's disclosures about...

SIR,— Having read Arnold Beichman's article 'The Larger Hope,' my eye went to the War On Want advertisement on the opposite page: . . Would any of us willingly stand by and...

Slit,—May I make a minor correction to my re- view of William Carlos Williams's White Mule (Spectator, August 20, 1965)? In .the second para- graph the description of Joe...

SIR, —The tragedy is that so few scholars wander into teaching. If this state of affairs continues, there won't be any scholars to wander. Nuffield Science Teaching Project,...

SIR,--I have recently been subjected to some passion- ate arguments in favour of higher pay for officers. The argument is that present scales are too low for the job and rank...

Squelch The Passion Flower Hotel. (Prince of Wales.)— Entlyn Williams as Charles Dickens. (Globe.) T HE British musical is not unlike the mechani- cal nightingale of which I...

In the Caledonian Market-place By NEVILLE CARDUS N INETEEN Edinburgh International Festivals to date. It is a far cry back to the first glamoroug year of 1947, when the sun...

The New Revolution T HE rejection of the outside world by the Russians has always received attention. Per- haps the time has come now to pay attention to what they are...

Sandwich Buildings 6L VINO above the shop' has all sorts of bour- geois overtones, but it is such a practical habit that many people who work in the City and West End of London...

By MALCOLM BRADBURY TRIS MURDOCH'S reputation as a novelist is _thigh; but it is surely not as high as it was. The shift in critical opinion derives in part from what seems to...

By ALFRED SHERMAN (Nutt image of the Spanish war has changed kf with the years. At the time, it seemed to exemplify the shape of things to come—political judgment day. When the...

READING Mr. Hanley's highly entertaining and illuminating survey of his (and my) native land, I pondered the question: stands Scotland where she did? Celtic's recent match with...

The Unpublished Correspondence of Mme de StaEl and the Duke of Wellington. Edited by Victor de Pange. Translated by Harold Kurtz. (Cassell, 25s.) A MAN may be essentially...

The Shearers and the Shorn: A Study of Life in a Devon Community. By E. W. Martin. (Routledge and Kegan Paul, 40s.) The Sociology of Housing : Studies at Berins- field. By R. N....

BATSFORD have courageously allowed two writers, William Gaunt on Oxford and Barbara Willard on Sussex (both 25s.), with lifelong knowledge and affection for their much de-...

Who Wants Deflation? Not the USA By NICHOLAS DAVENPORT TT must be great fun being a political corre- jspondent..Especially on a Sunday paper which requires the discovery of a...

By CUSTOS T HE launching of the huge £50 million 71 per cent loan stock by to (next week) comes conveniently at a time when many brokers are arguing that 'the cult of the...

Another Part of the Forest FOR anyone over four feet in height it is not easy to walk along a single-track railway line with either grace or speed; and it is harder than it...

By LESLIE ADRIAN Take 'rebuilts,' for instance. A branded re- built accumulator is a kind of assembly kit, con- sisting of an old container (or perhaps a new one), a lid, and a...

By BERNARD DENVIR AT times it is difficult to avoid the suspicion that M. Malraux regards culture in the same way that Clausewitz regarded war, as an exten- sion of foreign...

Since austerity's a bore, Let's produce a little more. When we had a five-day week, Things all looked a trifle bleak, So, since they are in the red, Let's try working four...

By ALAN BRIEN WHEN I was an essay- reader as a boy (when there were still essays to read and before I became the last of the rambl- ing egocentric essayists), journalists...