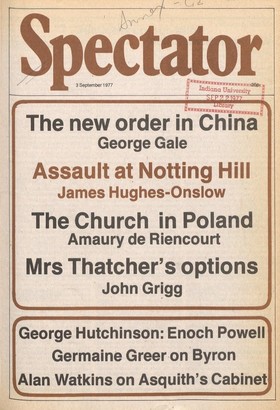 Wrong clothes stolen John Grigg Writing in the Sunday Express on 24 July, Enoch Powell gloated over what he saw as the discomfiture of his old party. There was, he said, 'a...

Carnivals, although not in modern times part of our accustomed way of life, are nice, bouncy, joyful events: or at any rate, are supposed to be. No one who has seen the jogging...

I found myself in hospital the other day — a patient for the first time in twenty-five years. Most of what I have to report of my stay consists of the re-assertion of the truth...

All our problems solved Auberon Waugh Montniaur If I have seldom commented on British Leyland in the past this may have been due to a Comparative ignorance of the subject,...

George Gale 'To put it in a nutshell, we say, "There is great disorder under heaven, and the situ ation is excellent",' declared Mr Li Hsien nien last April, in the process of...

Amaury de Riencourt Of all the national churches that make up the Roman Catholic world, the Polish church is unique, a clerical state wain a Communist state, the most...

Nicholas von Hoffman Washington John Hay, Teddy Roosevelt's Secretary of State, was heard to remark that, 'a treaty entering the Senate is like a bull going into the arena: no...

Alexander Chancellor Rome Rome, sophisticated Romans sometimes saY, is the only middle eastern city without a European quarter: quite amusing. It seems true up to a point, but...

James Hughes-Onslow I spent last Sunday and the Monday Bank holiday in a house between Portobello Road and Ladbrooke Grove not many yards from the Westway Flyover — probably...

Investing in Britain Nicholas Davenport As Lord Kaldor startled us all last week by quoting an anti-free, trade and highly socialistic anti-capitalistic statement made by...

Sir: I would like to thank Peter Paterson for his informative article on the Socialist Workers Party (20 August). He was as unbiased as any avid capitalist writing about a...

Sir: Alfred Sherman in his excellent article on the tourist plague makes one inaccurate assertion. He says that foreign tourists do not bath. One can only wish they would bath a...

Sir: It is intriguing that President Carter should appoint President Nyerere of Tan Printer's errors regrettably spoiled the sense of two recent articles. In Alistair Home's...

Sir.: In her review (27 August) of The Getting of Wisdom, Celia Haddon writes of its author, Henry Handel Richardson, that 'he keeps a gentlemanly distance between himself and...

Sir: Thanks are due to Mr Auberon Waugh for telling the truth about our Ambassador in Washington. How pleasant it is to have in London a steady scholar as Ambassador of the...

Sir: Among various misprints in my review in the 20 August issue was one making me say the opposite of what I actually wrote. The last paragraph, as printed, began: 'The foreign...

Alan Watkins Inside Asquith's Cabinet ed. Edward David (John Murray E6.25) There are all kinds of political parlour games which can be played to while away tedious hours. One...

George Hutchinson The Odyssey of Enoch Humphry Berkeley (Hamish Hamilton £4.95) On 28 July 1959 at one o'clock in the morning, Enoch Powell rose in the House of Commons to...

Anthony Holden Talking to Myself Studs Terkel (Wildwood House £7.50) Of the many different functions of journalism, one of the least pompous and most vital is to enlighten...

Peter Ackroyd A Victim of the Aurora Thomas Keneally (Collins 24.50) Although the publishers describe this remarkable novel as 'Thomas Keneally's first detective story', it...

Benny Green Matters of Fact and Fiction Gore Vidal (Heinemann £6.00) Gore Vidal is nothing if not perverse; the very first word in his new collection of essays is 'Shit',...

Kampf followers Phillip Bergson Fittla critics don't die, they go to festivals, Where heaven is a dozen films an hour, on the hour, with the original version of The Devil is a...

Liberte bodies Rodney Milnes It must be a plot on the part of our Tourist Board. The Edinburgh Festival Carmen is the second opera set in Seville in which the curtain has...

Sexplots Ted Whitehead After Shave (Apollo) State of Revolution Robert Bolt (Heinemann V .95) After Shave is a revue attacking sexism which is crippled by its own fear of sex....

Fox Talbot John McEwen Perhaps the most important visual exhibition in London at the moment is of W. H. Fox Talbot's calotype photographs at the Science Museum (till 13...

Italian vivacity James Harding Italian opera is a rich preserve for those of us who cherish the absurdity that endears — and endures. It revels in a dottiness far removed from...

Camera eye Richard Ingrams Considerable excitement was generated last week by the showing of The Case of Yolande McShane on Yorkshire TV. Mr Michael Deakin, head of the...

Root and branch Marika Hanbury Tenison When it comes to growing things, British kitchen gardens are some of the best in the world. They may not have the amount of sunshine it...