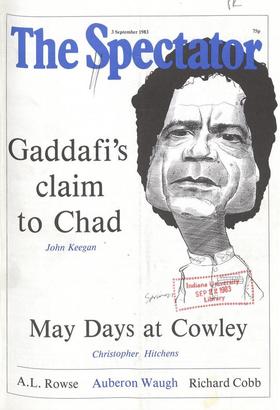 ecause Mr Menachem Begin has I./dominated Israeli politics for the past six years, it is difficult now to remember the respect that Western liberal opinion used to hold for...

From May to September George Gale A lready as this week ends the general councillors of the Trades Union Con- gress are deliberating to determine their col- lective line for...

L ast April 1 told in this column the sad story of a stray dog I befriended in Ita- 1 Y. After finding it abandoned and starving a t our house in Tuscany, I fed it and looked...

Grande Bouffe Auberon Waugh Montmaur, Aude ome years ago, it may be remembered, 10 the journalist Alan Brien announced that he had seen the light. Up to that mo- ment he might...

John Keegan C had, it is currently fashionable to say, does not really exist. And it is certainly true that it lacks geographical and ethnic u nitY, being another of those...

May Days at Cowley

Christopher Hitchens M y first attempt at bringing socialist politics to the workers of Cowley was made shortly before May Day in the magic year 1968. A group of trade union...

RoY Kerridge T he best way to get to the Notting Hill Carnival is from the north. By crossing t he bridge over the canal from Harrow Road and then crossing the railway bridge,...

An Earl from Oz

Richard West WangJord, Suffolk ven in Suffolk, one cannot escape the Sunday Times. This is the newspaper owned by an Australian pornographer and written by left-wing,...

Mr Bright made two speeches on the Temperance question at Birmingham, on Wednesday, on the occasion of open- ing a new coffee tavern, to be called by Mr Cobden's name. In the...

Gavin Stamp I t was a considerable tribute to Sir Nikolaus Pevsner that, although he was born in Leipzig in 1902, long before he died in Hampstead last month he was widely r...

Storm cones over Europe Jock Bruce-Gardyne M essrs Howe, Lawson and Jopling must have felt that they had come back to earth with a bump from their holidays this week. For the...

An affront to decency Paul Johnson T he article by Roald Dahl in the August Issue of Literary Review is, in my view, the Most disgraceful item to appear in a irespectable...

What is the purpose?

Colin Welch ike a happy and resilient cricket team, 1../ the Spectator seems to have no tail. So long as Kavanagh, P. J., hasn't come to the crease, you always have something...

Sir: The snide are seldom accurate in their facts. This law of literature is exactly illustrated by Richard Ingrams's references to Robertson Davies and the BBC programme...

Sir: It was a pity that Alan Gibson (6 August) should have spoiled his well- reasoned piece on South African cricket by taking side-swipes at MCC and its members. The majority...

Sir: Appleby-in-Westmorland indeed! (Richard West, 30 July). I shall always know that charming little market town by the name it bore when, long ago, I indited the following...

Sir: There is a certain irony in Alexander C hancellor's tale (Notebook, 23 July) of the Nile boatman who believes that in Britain men marry men. The Egyptian oasis of Siwa,...

Sir: Alastair Forbes's letter (20 August) sug- gests a competition as to who can write the greatest number 'of successive longest sentences without using the word 'and'. Mr...

Sir: I have been commissioned to write an authorised life of Spike Milligan, humorist and writer. I should be glad to hear from anyone with memories of Spike, and to have a...

Colespeak Sir: Richard Ingrams (20 August) suggests the use of sub-titles when the BBC's political c orrespondent John Cole is on the air. This seems but a panacea. The BBC...

Sir: Roy Kerridge (27 August) has got his Old ballads slightly confused. In 'The 'Ad Woman (not the Wife) from Wexford', the astonishing advice on how to drown y our husband is...

Much ado about nothing

Geoffrey Wheatcroft A History of English Opera Eric Walter White (Faber £30) J ohnson claimed that he could recite a chapter of The Natural History of Iceland by heart,...

Edinburgh, Vienna-style John McEwen T his is John Drummond's last Festival as T tO Director and, as before, he has chosen give it an underlying theme: Vienna at the turn of...

Confused Peter Ackroyd Merry Christmas, Mr Lawrence ('15', selected cinemas) J apanese prison camps have always been a favourite subject for those who like their brutality...

No secrets Richard Ingrams rir he wretched state of the BBC is well .1 illustrated by this week's announce- ment that Desmond Wilcox, the discredited former head of the...

Barred Jeffrey Bernard I f thI had a pub, and perish the thought, ere would be a wide category of people I'd aut omatically bar from the premises. Y e said before in this...

Zen P. J. Kavanagh 'Waving written in the last two or three 'weeks about dislike of the month of August, and dislike of political obsessives, I have been set free to realise...

Charles Seaton reports: A Fleet Street daily recently carried the news that over a third i A of Russia's industrial robots are jobless an d that those which are at work are u...

Caro can Raymond Keene A decade ago the Caro-Kann was con- sidered a solid, but rather dull defence against I e4. In the last few years, however, a new generation of...

containing the £200 Chequers chess competition are still available at I (post paid) from Back Numbers, The Spectator, 56 Doughty Street, London WCIN 2LL.

No. 1285: Amazing feats Set by faspistos: Limericks, please, describ- ing acts worthy of commemoration in 111 Guinness Book of Records. (The Place name need not come at the end...

Solution to 620: Mingle-mangle The correctly paired unclued lights are

A Prize of len pounds will be awarded for the first correct solution opened on 19 September. Entries to: Crossword 623, The Spec- tator, 56 Doughty Street, London WCIN 2LL. 11...

Mew research showed that Northern Ireland may contain a population which is 42per cent Catholic, in contrast to the previous official figure of 31per cent. Mr Ken Livingstone,...