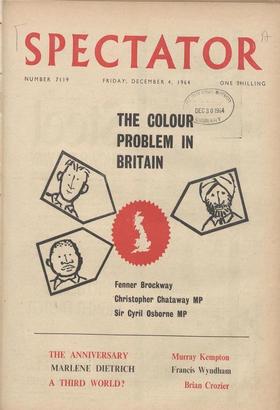 HALF-WAY THROUGH THE HUNDRED DAYS, and the pace was beginning to tell. The fight to save the I seemed like a melodrama—would the brave banks arrive in time with their $3,000...

Planning the Regions TT was the fortunes of the election

that 'decided that this week's Town and Country Planning Association conference on planning Britain's regions should be addressed by a Labour Junior Minister at the Ministry of...

STANLEY UYS writes from Cape Town: Afrikaans writers in South Africa have chosen an inopportune time to start a revolution in their literature. Just when an authoritarian...

JULIAN CRITCIILEY writes: Mr. Wilson leaves this week for Washington. He has an overall majority of four. He will arrive in the aftermath of the worst financial crisis for...

CFIANCHAL SARKAR writes from New Delhi: Three days in London could be a genuine relief for Mr. Lal Bahadur Shastri. They form his first real break after six months in office,...

an End ? Congo : Will There Never Be

From AARON SEGAL T HE Congo has become synonymous with all that is most appalling about human cynicism, indifference and brutality. It is now notorious as a graveyard for the...

'The -Opposition by its exaggeration Has worsened the situation. Its' reckless assertions have been found To endanger the pound.' So they said in September, They are still...

A Crashing of Gears By ALAN WATKINS The most striking fact is surely that the myth of Harold Wilson has been destroyed; and in the long run this may turn out to Mr. Wilson's...

THE COLOUR PROBLEM IN BRITAIN

Left By FENNER BROCKWAY TDEALLY there should be no restriction of im- migration. Freedom of movement is included in the United Nations Declaration of Human Rights. In one of...

By SIR CYRIL OSBORNE, MP I MMIGRATION has been swept under the carpet and for the next twelve months all three parties are pretending its tragic problems do not exist. What...

By CHRISTOPHER CHATAWAY, MP As the man in the middle, one is always in fAdanger of being dismissed as a waverer and a wobbler, and I must confess that my own record on the...

Looking Back on the Anniversary

From MURRAY KEMPTON NEW YORK All things fall down and are built again And those who build them again are gay.—Yeats. A Lin - LE less than a year ago Norman Mailer ,ftsaid...

A YEAR ago, a grief ago I first sat in this chair. I was regarded in Fleet Street as a freak, an amateur, a snatcher of bread from the starving mouths of journa- lists. There...

Drifting Away from Change By PETER KIRK T HE results dribbling in from the elections for Proctors to serve in the two Convoca- tions of the Church of England show, as was...

StR,-1 congratulate you on your courage in making the ,necessary

disclosures in connection with the brutal treatment of political prisoners in South African gaols. Your article will • almost certainly draw forth violent criticism from...

SIR,—Miss Hereward inquires why nobody cares when there is cruelty to Greeks in Istanbul. I am sorry to say I know the answer. Istanbul is not in South Africa. In the 1964...

SIR,—In your timely leading article on the now estab- lished

practice of torture of political offenders in South Africa, you refer to the tragic case of John Harris who was sentenced to death for the explosion at Johannesburg station. It...

SIR,—Rather wearily, may I claim the hospitality of your columns once again? I had hoped that recent correspondence would lay the whole topic of the Group to rest, at least for...

For my part, I have nothing but praise for the NH maternity service. As I live in a small village, 1 went to my doctor for all my ante-natal visits, and, for the last three...

SIR,—I have attended many Group Evenings and in my opinion

the standard of discussion at Jean Symons's evening, though high in quality and inter- est, did not differ in any radical way from that of many of the other discussions....

Sui,—Every time one small voice rises to cry out against some of the appalling treatment meted out to mothers under the National Health Service, it is immediately shouted down....

VIOLENCE IN THE LORDS

SIR,--In your issue of November 27, Quoodle quotes Lord Egremont as having said: 'If the electricity board's wayleavc officer comes to see me I shall throw him down the stairs.'...

By FRANCIS WYNDHAM A VISIT to the Queen's Theatre--where Marlene Dietrich's season has been extended one more week — can be interpreted as an act of religious ob- servance....

in January 1956. My first book, Once Bitten, Twice Bitten, was published in 1961, and every poem in it but one was written while I was a regular attender of Group evenings. I...

LORRIES ON THE MOORS

SIR,--Somebody has been taking Quoodle for a ride —a lorry ride. There is no 'proposal of the North Riding County Council to build a lorry route from Hetton-le-Hole to Otstleton...

SIR,—After reading and re-reading what Frank O'Connor had to say about An Irish Navvy in your Christmas. issue, I am still not sure which of us he is sorest at—myself, Val...

Cedric Cliffe wasn't the first to make a libretto out of Tartuffe. There are operas of the same name and source by a Russian, Shaporin, and a Swiss, Emil Haug. Neither of these...

Julius Caesar. (Royal Court.) Mr. Anderson's interest in magic circles and the corridors of power is so strong that he has almost entirely removed the Roman people, and this is...

Opponents of Mr. Patrick Heron, the most in- telligent of our painter-critics, have accused him in the past of just that fallacy. They have sug- gested that as a critic he has...

By ISABEL QUIGLY For King and Country. (Carlton, 'X' certifi- cate.) Joseph Losey, the director, said this last minute was taken from life; a man so dutiful, so humble, so...

A Third World? By BRIAN CROZIER AN academic friend whom I hold in deep ,M L respect wrote not long ago to suggest that it was my clear duty to write a book on how the West...

The Idea of a New University. Edited by David Daiches. (Deutsch, 25s.) SUSSEX has succeeded in becoming the most aggressively publicised of our universities. BBC- TV has shown...

Wind Versus Polygamy. By Obi B. Egbuna. (Faber, 16s.) FORTY-ONE stories packed into 285 pages from Alberto Moravia sounds like a bargain; unfortu- nately, like most bargains,...

LAST month the CND held its annual confer- ence at the home of lost causes, St. Pancras Town Hall. Many of its leaders and notables were a bsent, some, including Anthony...

Taking Life Seriously By. ROBIN DENNISTON T HE year, that came in like a lion with the Leslie Paul Report, grandiloquent if incom- prehensible rallying cries from the Toronto...

The Secular Promise. By Martin Jarrett-Kea' (S.C.M., 18s.) The Christian Belief in God. By Daniel Jenkins , (Faber, 25s.) Saving Belief: A Discussion of Essentials. BY and...

The Bible as History in, Pictures. By Werner Keller. (Hodder and Stoughton, 42s.) Hebrew Myths: The Book of Genesis. By Robert Graves and Raphael Patti. (Cassell, 36s.) The...

The World History of the Jewish People. Volume il: At the Dawn of Civilisation. Edited by E. A. Speiser. (W. H. Allen, S gns.) Palestinian Judaism in New Testament Times. By...

An Introduction to Religious Sociology : Pioneer Work in France. By F. Boulard. Translated by M. J. Jackson. (Darton, Longman and Todd, 7s. 6d.) The Ferment in the Church. By...

Lessons to be Learned By NICHOLAS DAVENPORT IT must be very mortifying for the Wilson Govern- ment to find themselves forced to take the restric- tive financial action which...

By CUSTOS T HE fact that Mr. Callaghan has confirmed that there is to be no penal taxation of com- panies and that corporation tax would bring in the equivalent of 15 per cent...

Which, Where and When By LESLIE ADRIAN OF all the things' that money can buy these days education is the riskiest, if only because you can get it for nothing as well—if the...

By MARY HOLLAND More often than not I will end up with some singularly hideous piece of craft which I am per- suaded is aesthetically satisfying because people have been making...

By ALAN BRIEN I NEVER cease to be sur- prised at the limitations of common sense. Beneath the rational, reasonable, sceptical world that we the tolerably intelligent and...