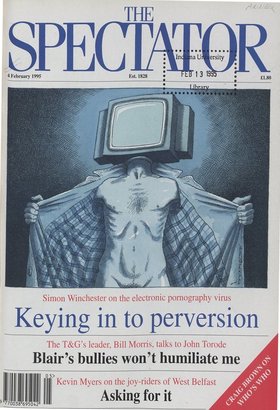 ANOTHER VOICE Has the art world developed a fresh perspective, had a new idea? AUBERON WAUGH Riffling through my post last week I came across an invitation to something...

[Sir: During his amusing diatribe against...]

Sir: During his amusing diatribe against every Fleet Street editor, apart from his own, Paul Johnson described the News of the World as 'dead'. This struck me as pretty rich...

[Sir: So Paul Johnson considers that the...]

Sir: So Paul Johnson considers that the Observer has been a disaster under the ownership of the Guardian group. Can this be the same Paul Johnson who told your readers on 23...

Evolving Darwinism Sir: In my essay on Darwinism in your 31 December issue ('The fatal flaw of a great theory'), I wrote that if Darwin were alive today he would protest...

Sir: Please, please don't listen to Peter Pre- ston's plea (Letters, 28 January) that you I phase out Paul Johnson, or perhaps, as has happened to the errant Guardian editor...

L E T T E R S Peter and Paul Sir: Mr Paul Johnson is wrong again, twice (Another thing, 21 January). I did not insist upon the fax by which the Guardian obtained the evidence...

Staunchly loyal - Sir: Your profile of Woodrow Wyatt was not something I would have expected from The Spectator. It was cowardly in its anonymity and unjust in its attacks. To...

[Sir: Even your ungenerous and anonymous...]

Sir: Even vour ungenerous and anonymous profile of Woodrow Wyatt ('A man for all reasons', 21 January) describes his role in exposing and defeating communist ballotrigging in...

Great heights Sir: How I wish that I could have seen Lady Thatcher 'ascend the dining-room of the Carlton' (Centre point, 21 January). Did she swing from a chandelier when she...

Past it Sir: Flattering as it is to be considered a 'bright young thing', I was surprised that you gave so much space to such fogeyish nonsense as 'Takeover of the teenage...

Scandalised of New York Sir: Oleg Gordievsky's KGB training in disinformation was not in vain ('The Guardian's KGB tactics', 14 January). He now presents himself as a...

CEN TRE POINT 0~~~~~~~~ Being on the right side does not mean never having to say sorry SIMON JENKINS A the US 5th Army inched its way up Italy in 1944 its command constantly...

Hamlet, though not meant to be

Hamlet, though not meant to be Anita Brookner THE PRINCE OF WEST END I AVENUE by Alan Isler Cape, £9.99, pp.246 S ince new talent invariably comes garlanded with...

Volleyed and thundered A. N. Wilson THE WESTERN CANON: THE BOOKS AND SCHOOL OF THE AGES by Harold Bloom Harcourt Brace & Co, f20, pp. 578 Y ou might have thought, if you have...

Daydreams Into destruction I would bring an order whole and classical. Hope for the good? Out of the question. Let me die invisible. Sors bona nihil aliud. To whomever digs my...

Mysteries of the orgasm

Poor Jack Jack suddenly became a widower; he was watching Golden Girls at the time, his wife was pinning a rip in the bedspread. The women in the block expected her to grow old...

Opera Troilus and Cressida (Opera North) Blood curdling Rupert Christiansen HFere I go again, banging on about how wonderful Opera North is, and how lazy Londoners could...

Theatre The Merry Wives of Windsor (Olivier) As You Like It (Albery) The Three Lives of Lucie Cabrol (Shaftesbury) Fringe benefits Sheridan Morley W\tritten famously at...

Television A wobbly beginning Nigella Lawson Oh dear. First Dangerfield, then The Buccaneers. What can I say? Actually, the most disappointing thing about Dangerfield (BBC1,...

Low life Give me a title Jeffrey Bernard I have got nothing to write about and never have had although yesterday my niece, Katie, suggested that I ditch biographers and write...

Office life Dangerous moves Holly Budd ANthur, head of division, with 'Streaky' Bacon and me as representative heads of department, were to appear before the Board to urge...

NeeD tir irst aid for the party i1S~gU~i41b,.. as -I,,I .Al I HAVE just been sent a book by Sally Bruce-Gardyne, widow of Jock Bruce-Gardyne, a very brave and splendid man and...

SPECTATOR SPORT Drop-kicks and fisticuffs Frank Keating THE BACK pages had a field day when Monsieur Cantona's Thai-box drop-kick chose a jeering spectator's chest during...