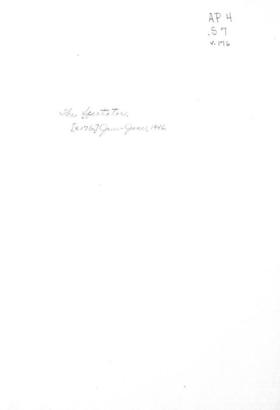 fhe success of the Moscow conference was not spectacular, but was, at the least, encouraging. It was regrettable, however, that progress was made towards finding a solution for...

HE Moscow decision to establish a Far Eastern Commission in Washington, and an Allied Control Council in Tokyo, on each of hich the USSR is represented, recognises Russia's...

The Anglo-Dutch talks at Chequers last week, in which the British and Netherlands Prime Ministers took part, have helped considerably to clarify our policy in Indonesia. A...

The finding of Hitler's political and personal testaments makes an enthralling story, which reflects great credit on the Allied intelli- gence services and especially on the...

The Labour Party celebrated New Year's Day with an announce- ment of its plans for consolidating its victory at the General Election. It wishes to increase still further the...

This week the French Government survived one of its recurrent crises, which arose from the debate on the National .Defence Budget, but was intensified by the permanent conflict...

Though the Governments of Great Britain and the United States have accepted the invitation of the French Governmett. to discuss the regime in Spain, they have very wisely...

FROM MOSCOW TO U.N.O.

LTAS the progress towards peace been - resumed—if, as a cynic n might question, it had ever been well begun? It is an apposite moment to ask that, a moment almost half-way...

G ILBERT MURRAY, who kept his eightieth birthday on Wed- nesday after an illness which suggested at one time that he would never keep it at all, is one of the men—perhaps the...

In Eleanor Rathbone the House of Commons loses one of

its most sincerely and universally respected members. To her colleagues there the news of her death will come as a surprise no less than as a grief, for right down to the...

I have said nothing about the John Amery case, though

it so happens that there are one or two notes of interest which I could add to what has been said already. But I cannot refrain from reproducing the moving letter from Amery's...

The Nuremberg trial is in full swing again, and likely

by all accounts to last for three or four months more yet. Meanwhile the short Christmas recess gave the opportunity for a kind of Nuremberg reunion in London. The British...

Ordinary readers—I will not say admirers—of Theodore Dreiser's works will,

I should imagine, have read with some surprise the depreciatory obituary notice of him in Monday's Times. Take one judgement alone: " The earnest, massive, but fatiguing An...

Unless I can get external disturbances like Christmas out of

my bones better than I did last week I shall have to start an Apology Corner as a permanent institution. Why I spoke of Arthur Clement Hilton, the author of The Octopus, as...

1 N this uncertain world there is little to gratify our human wish 1 for some certainty, but one of the remaining fixed points is the American electoral system. And on the first...

By ALASTAIR BUCHAN T HE reality and vitality of the British Commonwealth has been demonstrated beyond all doubt , in this war. Yet, without .desiring to belittle the ideas...

By ELIZABETH WISKEMANN Rome, Christmas, 1945. T O walk through Rome and observe the enormous trafficking in expensive goods which goes on in its shops and its market- places in...

[This article consists of the notes of a British officer who passed through Toulon recently.] I WANT to give a true impression of Toulon. I feel that people in England are too...

By LAURENCE WHISTLER P OSTM P OSTM EN have been busy again. For weeks past we have been EN and scouring our impoverished shops—the book shops where the one book that would have...

By HAROLD NICOLSON HAVE been encouraged by Mr. Michael Ayrton's robust and j honourable article in last week's Spectator to indulge in certain atfer-thoughts regarding the...

Paul Klee. At the National Gallery.—La Jeune Gravure Contem- porain and Contemporary Chinese Woodcuts. At the Royal Watercolour Society Gallery.— The Art of Tibet. At the...

James's. SOME day a really gifted impresario will have the brilliant and ex- ceedingly novel idea of producing as a pantomime a straight, un- vulgarised, un-popularised, but...

Review of the Year. "The House on 92nd Street." At the Odeon. LOOKING back at the films of the year, with what eagerness does the critic search for the least sign of a trend...

SIR,—May I, as a young student of eighteen, wholeheartedly endorse

the views expressed by " Student " from my native city and by Mr. C. Scott? The author of your original article " Youth and the Churches " was, I think, correct in his statement...

YOUTH AND THE CHURCHES

SIR,—In his letter of December zest, Sir Henry Bashford asks whether the time has not come for the Church as a whole to consider, reverently, whether it could not embody the...

AIR TRANSPORT AND THE R.A.F. SIR, —Mr. West opens his letter with the sentence, " There is hardly a line of your contributor Nigel Tangye's article on Air Transport and the...

Sui,—" Student " must have been greatly impressed with Canon

Marriott's letter in your last issue. I can imagine him feeling that it was the last word—the last word of hopelessness as far as the Church is concerned. But " Student " will...

Sta,—As a Serviceman who volunteered straight from school at the age of eighteen, I belong to that growing group who have had their education interrupted. In the course of our...

Class B releases from the Forces. We were selected as two of the 3,000 Arts students who were to be released to resume their studies not later than the beginning of October....

Sm,—It was with pleasure and a sense of relief that

I read Dennis Bardens' article " Czechs and Germans "' in The Spectator of Decem- ber I4th—pleasure that at length someone who knew the situation in Czechoslovakia accurately...

Snt,—As an officer of the last war, I sympathise with " Demobilised Officer " on the subject of " job hunting," but there is another side to it all. Your correspondent's letter,...

The welcome waterspouts have had also more positively beneficial effects.

A number of streams have their origin in the chalk ridges :or hills, such as the Chilterns; in which the water level 'rises and falls in response to past weather. This level had...

Sut,—Proposals from the Education Author;ties are being put before Council and Church School Managers with regard to centralising educa- tion in towns and closing up mar y...

THE ENGLISH ROMANTICS AND 'FRANCE

SIR,—All students of Anglo-French literary relations will be grateful to Mr. Harold Nicolson for his delightful " Marginal Comment " on this subject in The Spectator of December...

SIR,—I am sorry to know that your correspondent Philip Carr does not know what is a " toffee. apple " . . . he has missed much pleasure in never having seen a child enjoy this...

A soldier just returned from a Japanese prison camp has told how an ingenious member of the camp saved the health and perhaps the life of the prisoners by the making of a snail...

In My Garden In the interval between Christmas and the

Mom than abundant rains have at any rate done one service: they_ have robbed of their favourite excuse the inefficient guardians of our polluted rivers. It has been a popular...

Sur,—Looking back from this first peacemirne Christmas over the past six years, we feel a great wish to express to Mr. Harold Nicolson our thanks for his delightful articles in...

THE normal postal service: to Czechoslovakia, Italy and Poland have

been resumed, and readers who would like to send copies of THE SPECTATOR to their friends in these countries can now do so. The post paid subscription rate is 3os. per annum....

SIR,—The most evil and the most foolish thing that has ever appeared in an English paper. Yours is the responsibility, and truly- it can be said Better a millstone were tied...

Siegfried's Journey. By Siegfried Sassoon. (Faber and Faber. 10s. 6d.) IN a famous trilogy, Mr. Sassoon has recorded the experiences of George Sherston before and during the...

The Scourge of Banality

Chekhov the Man. By Kornei Chukovsky. (Hutchinson. 5s.) " His enemy was banality," wrote Gorki of Chekhov ; " he fought it all his life long ; he ridiculed it, drawing with a...

A Gospel for Today

Batu Khan. By V. Yan, translated by Lionel Erskine .Britton. (Hutchinson. 12s. 6d.) DURING 1945 there were a great many novels written in the ponderous and deeply significant...

THE SPECTATOR" CROSSWORD No. 356

[A Book Token for one guinea will be awarded to the sender of the first correct solution of this week's crossword to be opened after noon on Tuesday week, ?armory isth....

SOLUTION TO CROSSWORD No. 354

(Gifford. 7s. ed.) THE purpose of Mr. Baker's book is wholly admirable. Prompted by the large number of men (mainly in the Forces) whom he has heard declare that, after the war,...

— By CUSTOS AT the beginning of a new year investors must find themselves more puzzled than ever by the market prospect. On the one hand, the profits of many sections of British...

Give Back My Rivers and Hills! By I. Feng. Translated

by Innes Jackson. (Macmillan. 8s. 6d.) MR. FENG, one of the comparatively few young Chinese intellectuals to go on active service with a field formation, was attached in a semi-...