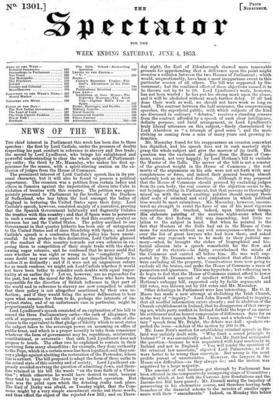 THE chief interest in Parliament this week has been due to three speeches : the first by Lord Carlisle, under the pressure of doubts respecting his past conduct in reference to...

In some other states, to judge by the portents of

the moment, moderate councils are recovering lost ground. Count Buol is said to have informed the Swiss Government that diplomatic relations with the Republic will be renewed by...

Scarcely a day has passed without some change in the

aspect of the Turkish difficulty; one ime, the expectation being all war- like; another, peace resuming its sunnier horizon. But whether it be war or not, the embarrassment is...

The step taken by the Bank of England in raising

its rate of discount from 3 per cent to 3-I per cent is generally ascribed to the necessity of providing for payment of the dissentient holders of Exchequer Bills, who,...

The colonists at the Cape of Good Hope were sending

us news confirming the account of peace with the Caffies, accompanied by rather angry if not threatening remonstrances at the delay of the Constitution ; but just as the mail...

PRINCIPAL BUSINESS OF THE WEER. Horse OF Loans. Monday, May SO. Russia and Turkey; Question and Answer-- Conversion of Stock; Lord Chancellor's Statement—Cuban Slave-trade ;...

The return of Mr. Roundell Palmer as Member for Plymouth was de- cided on Thursday. At the close of the poll, the numbers were—Palmer 944, Braine 876. Mr. Aspinwall, the...

The Queen has signified her intention of giving 200/., and Prince Albert 1001., to the fund for the erection of Baron Marochetti's statue of Crew de Lion in a conspicuous part...

Qintex Vic...roma has once more entered on that active life of business and pleasure which characterizes her Majesty's residence in town. On Wednesday, she held a Court at...

FRANCE.—The troops at Satory were reviewed on Sunday by the Em- peror. He arrived from St. Cloud in the middle of the day, and mounted his horse in the yard of the Palace at...

The Exhibition in Dublin continues to attract attention; and although the number of visitors have on one or two days, fallen below the ave- rage yet with the return o f ? fine...

The Duke of Genoa, brother to the King of Sardinia, arrived in London from Paris on. Tuesday evening. He was received at the London Bridge station by members of the Sardinian...

As a proof that the position of Piedmont is more

hopeful than we lately represented it, a trustworthy correspondent at Turin informe us, that offers have just been made to the Sardinian Government by foreign capitalists,...

The Duke of Genoa visited some of our London sights

on Thursday after the drawingroom, and again yesterday. On Thursday he went through the New Houses of Parliament,-an interesting sight to a Prince whose country has so...

STOCK EXCHANGE, FRIDAY AFTERNOON. The limit for sending in the June Exchequer Bills for renewal terminated yesterday, and it is understood that the payment to dissentients will...

SATURDAY. At the outset, he disposed of the appeal for delay, by representing that delay is unnecemary as regards information, and, in the opinion of Lord Dalhousie and Lord...

In the Court of Queen's Bench, yesterday, judgment was given

in favour of Mr. Lumley in his action against Mr. Gye for persuading Miss Wagner to break her contract with Mr. Lumley. Three of the Judges-Crompton, Erle, and...

Two statements reporting the march of Russian troops on Turkey

reach us this morning. The one comes from Paris, and asserts that "the Russian army is marching on the Turkish frontier," and that "the French squadron has anchored in the Bay...

The Times of this morning announces that Mr. Keogh, Mr.

Sadleir, and Mr. Monsell, have resigned the offices they held under the present Government ; the Herald adds Sir Thomas Redington to the list. Lord John Russell's declaration...

The notice of Mademoiselle Rachel, who made her debt for the sea- son on Wednesday, may be summed in the bulletin form, that she is as well as ever. It will be recollected that...

Of the minor concerts of the week, Mrs. Anderson's has

been the most remarkable ; though it can hardly be called a minor concert, considering the very great scale on which it was got up. It was given on Wednesday morning at Covent...

The two Philharmonic Societies have had concerts this week ; the Old at the Hanover Square Booms on Monday, the New at Exeter Hall on Wednesday. The Old Society's concert was...

L'Epreuve Villageoiss, an old pastoral opera by Gretry, has been revived with great success at the Opera-Comique. The Parisians seem pleased with a temporary return to the days...

The reproduetion of the Huguenots at the Royal Italian Opera,

on Thursday, with an overflowing audience headed by the Queen, was by far the most brilliant performance of the season. The intrinsic attractions of this fine opera—interesting...

THE LAND OF LUCK.

NiaTE ships arrived from Australia this week, within a few hours of each other, bringing more than 1,000,000/. in gold, and accounts that attest the constantly growing estimate...

THE NEW INDIAN GOVERNMENT. IT would not have been easy te collect a definitive idea from Sir Charles Wood's five-hours speech if we had enjoyed the advantage of hearing it, and...

A Chancellor of the Exchequer who knows when to hold his tongue may be an innovation, but it is a valuable one ; and in comparing the qualifications of the statesman who...

WE are ridden by the anomalies of our political system, without power to shake them off; on the contrary, we preserve them as if they had a special value. We administer...

Ir gratitude is "a lively sense of future favours," those who ne- glect to pay it will find their credit cut off in the shop of futurity. Seriously, there is no more unhappy...

1st June 1853. Sin—In the somewhat irregular discussion in the House of Lords the other day, on the new duties on succession, the descent of the title of Nelson was referred to...

HAVING accomplished an understanding with the United States for the purpose of abolishing that reprinting of books without honestly paying for the copyright which injured...

FINLAY'S BYZANTINE EMPIRE, FROM the removal of the seat of empire to Constantinople by Con- stantine, in the earlier part of the fourth century, until the capture of the city...

PALLISER'S ADVENTURES IN TIER PRAIRIES. * IF Mr. Palliser has not

EXHIBITION AT GORE HOUSE. The Department of Science and Art—to which title, judging from the Catalogue, that of "Practical Art," objected to by Mr. Dyce, seems to have been...

The Royal Hunt cup for the present year, which we have seen at Mr. Hancock's, of Bruton Street, where it was moulded, is a large silver vase, composed of branches and leaves of...

A collection of antiquities, formed during a term of thirty years by the late Gabriel Fejervary, a Hungarian gentleman, is to be seen at the Archaeological Institute in Suffolk...

An entertainment under this title, consisting of lecture and diorama, in Which the former bears a rather more important proportion than usual to the latter, courts public notice...

Ansuastair, May 28.-The following promotions have this day taken place, conse- quent on the death, on the 27th instant, of Vice-Admiral of the Red Sir F. Mason,...