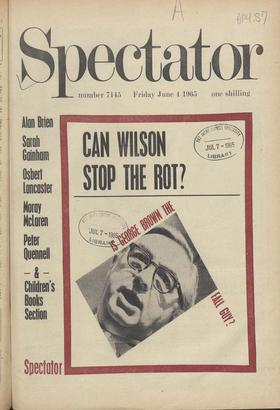 — Portrait of the Week 111E MONSOON SEASON arrived in Vietnam,

bringing savage attacks from the Vietcong. Hundreds died on both sides and brutal fighting continues. Across the border in China Mao Tse-tung was rumoured to be critically ill....

Can Wilson Stop the Rot?

T HE wind at Westminster is suddenly laden with straws. Mr. Wilson is booed . in Downing Street : the National Opinion Poll for the first time shows more people dissatisfied...

The Labour party is rich in procedural theology as no other party is. In its organisational underworld you will come across people,otherwisc undistinguished, who delight in...

No Dien Bien Phu? T HE arrival of the rainy season in Vietnam means that for the next two or three months American and South Vietnamese actions must largely appear as holding...

Serious commentators on Germany can now drop the wearisome and boring (to themselves) task of demanding that the same things should be called by the same names as elsewhere, and...

Yeats and the Critical Pendulum T. R. HENN • • S. L. A. Marshall on Liddell Hart One year's subscription to the' Spectator': f3 15s. (including postage) in the United Kingdom...

Lord Arran's apparent assumption that the best way to reform the law regarding homo- sexuality is simply to enact the Wolfenden, pro- posals may well be shared by the great...

1 don't know whether a CBE would ever have been regarded as worth. the equivalent of £12,000, even in Lloyd George's day. But when the Daily (*graph announced last week that its...

Ode on the Rediscovery of the Duke of Wellington

George Brown—Fall Guy'? By ALAN WATKINS S mans after the budget Mr. George Brown dispatched a note to Mr. James Callaghan. The note was congratulatory in tone. It was at the...

Percy Anecdote Wilkes was one of the most fascinating com-

panions that ever sat over a bottle. When in the House- of Commons he has frequently de- tained gentlemen of adverse politics from the House by his wit and humour, merely to...

I WOULD have thought it rather di ffi cult to make a film out of Fanny Hill. But it has been done, and the film has been duly banned in London. It has, however, an 'A'...

Birthday Honours Writing in the Spectator just a year ago

under his old pen name Strix, Mr. Peter Fleming re- vealed that last year The Times had dropped him from their short list of 'Birthdays Today.' Strix proceeded to write a short...

Disclosure Sir Hugh Greene was naturally nettled when the Daily

Mirror published a long and em- barrassing account of a speech he made (in private) dwelling on the administrative short- comings of the BBC. But he hardly extricated himself...

Technocrat It has been instructive to observe the degree of

affectionate esteem evoked by Dr. Beeching's farewell to the railways this week. In his short spell' as head of this nationalised industry he probably provoked more indignation...

Restriction Spectator readers will be familiar with the name of

Leo Baron and will have read that the Rhodesian authorities served a restriction order on him last weekend for 'activities prejudicial to law and order.' He is to be confined to...

The Westminster Show No doubt television will conic to Parliament

one day. I think much of the present alarm at the prospect is misconceived. I do not believe there is any perceptible public demand for a separate television channel devoted to...

From OSBERT HASTINGS ROME I T used to be said by Giolitti that the best way for an Italian Prime. Minister to lose office was to introduce legislation on hunting. Having seen...

All in the Sky

From DEV rTHE first impression of Moscow is always a I subduing one, especially in autumn or winter. It looks drab. Worse, it feels like being in an overblown provincial city....

`Yes' to the Comprehensives?

By DAVID ROGERS D o Conservatives really understand the reasons for the Crosland Circular on Com- prehensives sent to local education authorities? Even the newest of the...

• By LAIN SCARLET M osr people who have been to prison seem to have experienced 'gate-fever' in one form or another. I know I have. Old lags warned me that a man is more likely...

SIR,—I have been sent a well-produced booklet called National Library Week : .March 12-19, 1966. In forty pages it sets out a national and local plan for the promotion of a...

Sus;---I found Dr. Sargant's review of my two books on crime and on behaviour therapy extremely .dc- pressing. A reviewer, one might think. ought to deal with what the author...

SIR,—In one sentence of his article in your April 20 issue, Quoodle reveals one possible reason why Britain has fallen behind her industrial competitors and what she should do...

Sta.—Desmond Stewart (May 21) makes Egyptians look somewhat ludicrous by claiming that their largest publishing concern is called 'House of Nationalism'—a literal translation of...

SIR,--Mr. Brian Crozier boldly claims that Roy Perrott's final paragraphs in the Observer of May 16 'confirm as precisely as one could wish the account I wrote' of the Dominican...

SIR.--We are offering £1,000 on account of sub- sequent royalties for a novel of literary merit, in the hope of establishing the career of one serious writer. Associated with my...

SIR.---I have been informed by the Department of Education and Science that. following the recom- mendations of the Burnham Committee, a graduate in physics from Uppsala. the...

SIR.—It is no use Mr. Anthony de Meeus stating that the translation of Valeriy Tarsis's Ward 7, reviewed by me on May 21, is faithful to the original in letter and spirit. it is...

SIR.-- Recommended reading for Mr. Isherwood and others: The Name

SIR. --- Any historian who attempts to analyse a major political crisis in depth (as opposed to the relatively simple exercise of a blow-by-blow account) is 'entitled to...

SIR. --In all races. women's brains are on average smaller than men's, as Mr. Roderick Cave says. but, as was observed by Thomas Henry Huxley a hundred years ago and often...

The Long and the Odd and the Short By IAN CAMERON T'S always difficult to say anything general labout the Cannes Festival. Certainty no trends were revealed this year—anyway...

F OR some little time there has been in London a fifth column, not too well organised, not easily recognised, whose password has been 'Hazel's Hips,' whose intent the conversion...

Muggeridge's America M ALCOLM MUGGERIDGE's exposure of life on the American lecture-circuit made stunning television (BBC-1). From the first moment when he loped towards us...

BOOKS The Face of Caricature

By OSBERT LANCASTER I t would be hard to think of any British artist of comparable stature who has been so long and so undeservedly neglected as the subject of this scholarly...

I heard-his voice once, scratched, But underneath like Maud in the high hall garden; And saw him, pacing his paved walks Afraid and alone, examining the grass Behind the lens of...

's still a bit difficult to regard Herr vo o a guru-fancier. Admittedly the click and sparkle of his famous camera long since misted or mildewed away. What stiffened the...

EN Run to the Sea, a young doctor ; Victor Bronzo,

returns to Ireland--where he was a medical student---for a holiday. He is accompanied by his rich and indolent wife, a lady with whom he seems to have the bare minimum in...

NEW PAPERBACKS : A High Wind in Jamaica. By Richard

What is the Matter? ) Chit

Peppercorn Papers. By Claude A. Prance. (the- Golden Head Press, 42s.) BOOKS. The smell of the paper and the glue. the feel of the binding; the sensuous thing--and. of course,...

The Thunder Rumbles On

FOR the French armed forces, the Indochina war of 1945-54 has assumed an importance greater than that of any other war fought in this century. The stigma of France's surrender...

C.' WALTER HODGES is the man all the ' publishers of children's books, the librarians and the teachers are talking about today. As zio artist he has won the 1964 Kate Greenaway...

The Peacock Age By ELAINE MOSS F on every twelve- to fourteen-year-old who .ants to read (or write) Catcher in the Rye `there are nine who, if they read at all, want Mature...

On with the Chase

All Creatures Great and Small. By Daniel P. Mannix. (Longmans, 25s.) The Way of a Countryman. By Ian Niall. (Country Life, 25s.) The Elderberry Tree. By Irvine Petite....

Of Mice and Men

FROM Aesop onwards, animals have been used to depict human problems, vices and virtues, strength and weakness. This seaion's crop of picture-story books owes a great deal to the...

How to Say It

CHILDREN, above all, are liable to be influenced by the corrupt use of language in advertising, the popular press, and so on. Any practice, therefore, which stimulates children...

I DIDN'T think that in 1965 they would still be writing stories about golliwogs. But that's what Ruth Ainsworth has done in Rufty Tufty Makes A House (Heinemann, 9s. 6d.). This...

Through the Nose Nor a very engaging bunch of books

and most of them ridiculously overpriced. I hope parents will rebel and refuse to pay as much as fifteen bob a time for such trite offerings as these when there arc already so...

The Battle for the £ By NICHOLAS DAVENPORT CTERLING has come under pressure aga,in- amonths before it is seasonally due-and opinions differ as to the cause. Some blame the...

By CUSTOS TTIHE day the market 'stopped' was a headline in the Sunday Times and a whole page was devoted to the dramatic story of the morning ' + suspension of dealings on May...

By LOTHBURY L owut pro fi t margins were experienced by Barton and Sons, the tube and conduit manu- facturers, for 1964, but increased activity in the engineering industry...

Cover Story By LESLIE ADRIAN But what is this cover charge all about? In some restaurants it is a sheer imposition. At others they include rolls and butter, a linen napkin and...

By MI( HAI L AST OR I WATCH television sporad- ically, enough only to form an impression of cer- tain programmes, mostlY of the news, views and opinion variety; and one...

By ALAN BRIEN A HOLIDAY seems to me an almost perfect, scale-model, working-toy image of life, a potted, concentrated, in- stant metaphor which telescopes and mirrors all the...