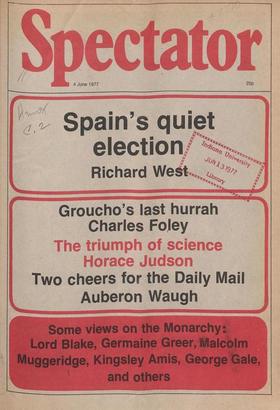 The blessings of continuity

The first twenty-five years have turned out very differently from those expectations of renaissance drummed up in 1952. For Britain as a nation the Queen's reign so far has been...

For once, a story about the Poles with a ha ppy ending. The splendid new Polish i Lb.rary has just opened in Hammersmith. 1 : l us gleaming cultural centre is a far cry ,' r oin...

Let dogs delight Auberon Waugh 'Mr Varley is a member of our party. And so to him falls the honour of settling the score with the Daily Mail . . .He should, to coin a phrase,...

Richard West In Toledo, former capital of Spain, one might start to wonder how this sombre and bl oodstained country has ever achieved Peace, let alone set out to hold a...

Mary Kenny Dublin My mother votes for Fianna Fail because her mother worshipped de Valera. They were from the West of Ireland, my mother's family; they were Republicans who...

Charles Foley Santa Monica In 1 972, when Groucho Marx was eightyO ne, he emerged from retirement — some would say he was dragged — to perform in perso n for the last time,...

The limits of the GLC

Tony Craig London, according to Disraeli, is 'a nation, not a city', and many would agree that it is as over-governed as the most bureaucratic of nations. The GLC's annual...

Christopher Booker On a breathtaking May morning last week, Georgian Bath looked almost more b eautiful than ever. The meadows below Lansdown Crescent were a yellow carpet of...

Frank Norman 'All done at five thousand, five hundred pounds?' Peter Wilson, the chairman of Sotheby's, intoned as I walked into the Mentmore sale. 'Against you at the back,...

Warrants for all seasons

James Hughes-Onslow N ext year Electrolux Ltd will have to stop saying they are 'Suction cleaners and r efrigerator manufacturers by appointment to the late Queen Mary.'...

Some views on the monarchy

I think it is one of the very few constitutional institutions in Britain which is working very well and is extremely seldom criticised. We live in a world where there is a great...

Capitalism for the people Nicholas Davenport Last week I reviewed the remarkable book hY Stuart Speiser which put the case for the diff4sion of capital ownership in America....

Please, Jeffrey Sir: How gratifying that the urbane Jeffrey Bernard is a reader (14 May) of Cosmopolitan! As he wrote in his article Press ladies, I have called sex overrated,...

Sir: As an admirer of Rebecca West I was honoured that Miss Ethel Sands and Her Circle inspired what Christopher Booker (Notebook, 7 May) gleefully applauded as her 'little gem...

Sir: Your reviewer Francis King is wrong twice over in his assertion (7 May) that Nicholas Moore's only comeback since the early postwar period has been a reissue of his...

Sir: Mr Maurice Hare's letter (23 APr, i , 1 3 wondered whether the influence of l'A ( r i l s on her husband, Erskine Childers, 'conversion' to Irish republicanism been...

Sir: I was sorry to read George G alt ! disrespectful reference to Em 311 ' e Swedenborg (Notebook, 28 May). ;a d Swedenborg was a distingioThfic eighteenth-century scientist...

S ir: Why all the fuss over Michael Foot's co Mments on the judges, when Sh akespeare, a far bigger spendthrift of his longue, is on record in King Henry VI, Part II as having...

Sir: It was a pleasure to read Patrick Cosgrave's article The fourth R in your issue ?f 7 May. It was a pity, though, that he chose end id by endorsing Sir Herbert u...

Sir: Shiva Naipaul in his letter from Tanzania (14 May) paints a rather grim picture of life in that country. Having returned just this week from four years' working as a...

Sir: Richard West (14 May) is quite correct in saying that English names may sometimes sound odd to foreign ears. But the reverse is also true: My wife — a reticent and reserved...

Study in inconsistency Brian Inglis Charles Stewart Parnell F.S.L. Lyons (Collins £8.50) The people of Ireland, Lord Melbourne wrote in 1834, 'are not Such damned fools as...

Magnus Linklater The Hughes Papers Elaine Davenport and Paul Eddy with Mark Hurwitz (Andre Deutsch 24.95) if You can bear to hear anything more about Howard Hughes who, like...

David Levy The Soviet Union: A Travel Guide Eugenie and Jeffrey Gross (John Murray 25.95) What Solzhenitsyn's ex-wife living in Russia has to say about him in a book written...

Kenneth Griffiths The Red Soldier Frank Emery (Hodder and Stoughton £6.25) I have read this book avidly: not because there is a shortage of printed words about the Zulu War...

at Rogers Children of the Sun Martin Green (Constable 27.50) The Twenties are always with us, and usually I t seems to be Oxford in the Twenties. If it s not u ndergraduates...

Bumps in the night

Benny Green Night Visitors Julia Briggs (Faber £6.95) If! say I disagree vehemently with almost every one of Julia Briggs's conclusions as to the nature of ghost stories, if I...

Has science won the argument?

Horace Freeland Judson Science is this century's art. Bacon wrote that knowledge is power, but he was not a scientist: his slogan was coined, and has ever since been useful, to...