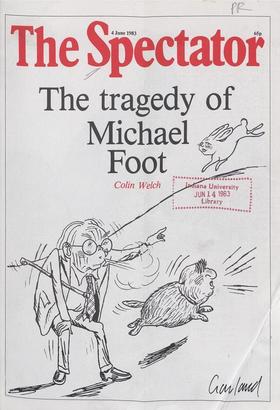 A t election time, there is a slightly artificial convention that the voter chooses between the parties 'on their merits'. The major parties are treated with equal deference,...

E lsewhere in this issue of the Spectator a number of people tell us how they are going to vote in the general election, and why. You may possibly be wondering how I am going to...

Away from it all Auberon Waugh L ast week I journeyed up to the North East for what I supposed wouldbe another pre-election Geordie-baiting episode, sponsored by Newcastle's...

Sitting on serpents' eggs Colin Welch M r Foot's old white head bobs about among the jostling crowds of Lan- cashire and Yorkshire like flotsam dashed hither and thither by...

Charles Moore / What sort of government will we get if the Conservatives win? Mr Denis Healey has been drawing out attention to this question. Like those Victorian ar-...

Paul Johnson A Labour heads for what looks like disaster, Mrs Barbara Castle MEP has been complaining of the conspiracy of right-wing press proprietors to bring it about. There...

Richard West King's Lynn O n the way to report on the North-West Norfolk election, I stopped off at Ely, which is the best place in England for seeing our modern worries in the...

Peter Ackroyd M rs Thatcher was described, in these pages last week, with her absurd rushing about and occasional shrillness, as resembling Widow Twankey; if we continue the...

Peter Paterson It is highly uncharacteristic of Mr Denis Healey to volunteer for martyrdom, but his quixotic gesture in virtually taking over Labour's campaign from the unhappy...

Black and British in Brixton

Roy Kerridge 'T think Mrs Thatcher is a fine woman and 1 I'm going to vote for her,' a St Lucian housewife told her demure 14-year-old daughter. 'But I'm afraid that young peo-...

Leo Abse L abour MPs in private speak of Michael Foot invariably with affection and frequently with exasperation: the Tory MPs, contrariwise, exude no warmth towards the...

Age of the common Tory

Alan Rusbridger T he Sun is pretty pleased with the way things are going in this election, and few things seem to please it more than the prospect of a future Thatcher cabinet...

open to non-subscribers Take out a subscription to The Spectator and we will send you a free, signed copy of BESIDE THE SEASIDE OTHER TALES by Roy Kerridge Subscription...

There are many ways of wasting time in the House of Commons, but all but one are imperfect in this or that par- ticular. They require some degree of concert on the part of those...

The Queen and the spaceman

Andrew Brown T he evening train from Gothenburg to Uddevalla seems to have been assembl- ed from old trams, or perhaps from war- time troop trains. Drunks flock to it, perhaps...

Can the disease be cured?

Nicholas von Hoffman Washington . . . We got reports from down here that people were doing 'stupid sensual things', were in a state of 'uncontrollable frenzy', were wriggling...

How they will vote

The Spectator invited a number of people from various walks of life to say how they would vote in the general election, and why. Some regarded the question as impertinent;...

Sir: Mr Harry Theobalds of the IBA has not really made the Code on who or who cannot advertise on television logically ex- plicable (28 May) — even though it looks as if the...

Sir: Your leader 'Campaign tedium' (21 May) derides the broadcasters for being too cautious in covering the general election. We are accused of suppressing 'most of the...

Sir: Peter Calvocoressi tells us that he will vote Labour with more conviction than ever before (21 May). Is that because the new Labour Party programme is almost iden- tical...

The beauties of Belfast

Sir: In my article on the architecture of Belfast (21 May) I much regret that the large cuts which had to be made omitted all mentions of both the Ulster Architectural Heritage...

Who owns the Victorians?

Sir: The Spectator owes much of its readability to the powers of caricature, so it may seem churlish to complain of Peter Ackroyd's account of the History Workshop on 'Victorian...

The beautiful life Caroline Blackwood Mary Berenson: A Self Portrait from her Diaries and Letters Edited by Barbara Strachey and Jayne Samuels (Gollancz £12.95) `S he was...

A life of contrasts

Peter Ackroyd The Importance of Being Constance Joyce Bentley (Robert Hale £8.75) F or almost a century Mrs Oscar Wilde has remained precisely that: only the s, of her title...

Brian Masters Who Wants to be a Millionaire? David Frost (Andre Deutsch £4.95) I t would be churlish to offer criticism of a book which is designed to be left on top of the...

Bohdan Nahaylo Stalinism: Its Impact on Russia and the World Edited by G. R. Urban (Maurice Temple Smith £15) 'H istory does not know a despot as brutal and cynical as Stalin...

Unhappy medium Peter Ackroyd The Ploughman's Lunch ('15', Gate Notting Hill) linmy Penfield, the central character in this film, is a BBC journalist; he is . a man without...

Questionable Maureen Owen T find the two most compulsive election 1 themes at present on the air to be Robin Day's daily Election Call (Radio 4), and the less predictable...

A touch of class Giles Gordon Beethoven's Tenth (Vaudeville) They Came From Somewhere Else (Lyric Studio, Hammersmith) The Comedy Without A Title (Lyric, Hammersmith) Bottom's...

Star-struck Taki T here are two things I've always liked about Oliver Gilmour: his wife and his sister-in-law. As of last week I've added another, a bit more abstract perhaps,...

Spirituality Richard Ingrams TVs funny how on every one of these 1pointless bank holidays which now make life in spring and early summer so difficult, I end up watching a...

Liquid light P. J. Kavanagh I propose to write in praise of the month we have just enjoyed, the wettest, darkest May anybody can remember — which is to say since last year. I...

Well mauled Jeffrey Bernard illiatn Harrison 'Jack' Dempsey, the `Manassa Mauler', has taken the float count as Ring Magazine would and will say. He was born on 24 June, 1895...

Jaspistos reports: Competitors were asked to anticipate the imminent British Telecom Dial-a-Prayer service with a formula that cannot possibly give offence or arouse con-...

No. 1272: Elementary Set by Jaspistos: You are invited to write a short detective story of less than 250 words in which Sherlock Holmes reaches a typical- ly brilliant solution...

Brobdingnagian Raymond Keene A n interesting venture has just been brought to my attention — a new company calling itself Giant Chess and Draughts Ltd. It is the idea of...

Assembly line by Mass A prize of ten pounds will be awarded for the first correct solution opened on 20 June. Entries to: Crossword 610, The Spectator, 56 Doughty Street,...

T he tide in the affairs of the Labour Party continued to lead on to misfor- tune. Mr Jim Mortimer, Labour's general secretary, felt constrained to affirm the par- ty's...