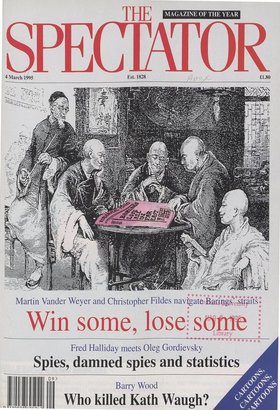 Waiting for the bank to open B arings, Britain's oldest merchant bank, went bust after Mr Nick Leeson, a 28-year- old trader born in Watford, lost some £700 million in deals...

The time has come to look at sleaze in ermine. The Upper House has long been a gravy train BORIS JOHNSON I you have a spare half hour in the next I two years, get along to...

DEBORAH DEVONSHIRE A the days lengthen, the new hens are laying well and wander further across the park. There are the old breeds of Light Sussex and White Leghorns plus some...

Memorandum from the valley of the shadow of death AUBERON WAUGH I had thought to spend last weekend in Paris on what the ticket-sellers call a mid- winter break, but some...

WHO ARE YOU CALLING AN AGENT OF INFLUENCE?

NOT AS FUNNY AS CLOUSEAU

Alasdair Palmer reports on the nefarious activities of France's secret police forces, and, in particular, Renseignements Generaux' IN ALMOST EVERY country, the end of the Cold...

Martin Vander Weyer ran the Far Eastern operation of one of Barings' rivals. He finds the cause of the bank's collapse all too believable I REMEMBER a warm Sunday afternoon at...

THE SPECTATOR is upbraided by a reader from Hampstead (though she can't help that) for using the word ful- some to mean 'enthusiastic, warm, wholehearted', whereas in her book...

THEY SHALL NOT BE MOVED

The unionists have won; the IRA have lost. These facts deserve wider circulation, argues Kevin Myers Dublin ONLY ONE question counts. Will a child born in Belfast on the day...

persist. . . I ONCE read a book by a philosopher in which it was maintained that there was no drug yet in existence so powerful in its addictive properties that it could be...

Barry Wood investigates the unsolved mystery of the abduction and killing of a handicapped woman, and the matter of a missing £1,878.86 THREE YEARS AGO, Kathleen Waugh was...

A man of many epiphanies to remind us what England was once about PAUL JOHNSON L ast week I attended a dinner party to mark the 80th birthday of one of the most notable men of...

Second time unlucky for the lordly Barings a great Nemesis overtakes Croesus CHRISTOPHER FILDES T his, I thought, must be a time-slip. `Barings crashes — speculation blamed':...

innuendo about the Pioneer Fund which I hope you will permit me to set right. Since these same inaccura- cies have appeared in the American tabloid press, I assume that Mr...

Sir: Alasdair Palmer in his article 'Does white mean right?' (18 February) complete- ly misrepresents the arguments presented in The Bell Curve which he purports to dis- cuss....

Sir: The cultural gulf between the image of racists normally

seen in the media, that of yobs behaving in a thuggish manner, and the educated middle class may make it dif- ficult for many to accept Alasdair Palmer's suggestion that...

Sir: My collaborator Mr Willis Hall correct- ly points out (Letters, 25 February) that the 15 guineas we received for our contribution to Mr Ned Sherrin's 1960s revue Night is...

Sir: May I add a footnote to the recent corre- spondence on the bombing of Dresden and other German cities (Letters, 18 February)? In the early 1980s I had lunch with Sir John...

Sir: Last Friday evening I was waiting at a bus stop on my way to a dinner party. To while away the time, I was reading The Spectator. The other man at the bus stop took...

An ad too far

Sir: The RSPCA's contemptible advertise- ment in The Spectator (18 February) attempts, by implication, to lump hunting in with the gratuitous cruelty of yobs, i.e., using...

Sir: I am grateful to Taki for his kind remarks about me in The Spectator (High life, 25 February), but would like to point out that whatever errors of judgement Tina Brown may...

The lesson of the Benn v. McClellan fight: bring back bare-knuckle boxing SIMON JENKINS I was first taught the Noble Art of Self- defence by the 'boxing poet', Vernon Scan-...

Piers Paul Read DAYS OF OBLIGATION: AN ARGUMENT WITH MY MEXICAN FATHER by Richard Rodriguez Penguin, £6.99, pp. 230 t first sight, these essays by 'a gay, Catholic...

This land is not his land

Dean Godson FROM SEA TO SHINING SEA by Gavin Young Hutchinson, £20, pp. 297 T his is the kind of book which gives amateurs and amiable generalists a bad name. Cheerfully...

We have stood apart studiously

Anita Brookner AN EXPERIMENT IN LOVE by Hilary Mantel Viking, .£15, pp. 250 T he love mentioned in the title is not of the sapphic kind, although the protagonists are three...

How to be rich and famous and serious

Cosima von Billow THE ADVOCATE'S DEVIL by Alan M. Dershowitz Headline, £16.99, pp. 311 A s the 0. J. Simpson ordeal drags into its second month, even the most die-hard trial...

In search of a wife

Charlotte Smith THE RIDERS by Tim Winton Picador, £14.99, pp. 377 T he author's photograph on the dust- jacket of The Riders shows the back of Tim Winton's head. Like his...

Look here upon this picture, and on this

Jonathan Keates FISHER'S FACE by Jan Morris Viking, £16, pp.256 S o entranced was King Alfonso XIII of Spain with Admiral of the Fleet Lord Fisher of Kilverstone that he...

Michael Hulse THE FILM EXPLAINER by Gert Hofmann, translated from the German by Michael Hofmann Secker & Warburg, £9,99, pp. 250 H e's going to be a poet one day,' says Karl...

Correction The fourth volume of Joseph Frank's Dostoevsky, published by

Robson Books and reviewed by Peter Levi last week, is not available until the end of March. We apologise for an early notice.

Murder, theft and coercion near the Louvre

Jazz What's a nice girl like you . . . Martin Gayford eavesdrops on Bromley's (and England's) most successful instrumentalist I n 1957, someone took a big, end-of- term style...

A set of vital tunes Richard Osborne I t was Walter Legge who claimed that `Great conductors of Johann Strauss and the best Lehar are rarer than men who can squeeze out the...

Frowning glory Nigella Lawson A bout three people told me how had Crown Prosecutor (BBC1, Thursday 8.30 p.m.) was before I'd even got round to watching my tape of the first...

Neither up nor down Taki A book review by Anthony Howard in last week's Sunday Times has caught my eye, and because of it, I shall forget all about the Barings and the...

Spaghetti junction Jeffrey Bernard t seems to me a little unfair that I should feel so sick without having had a vodka now for nearly five months. At least I could understand...

Portrait of a wedding Nigel Nicolson h e gap between the last flowers of one year and the first flowers of the next has narrowed to December and ,January. Already in our...

Lavish dreams Holly Budd T he power-seeker always wants to he close to the centre of power. Physical prox- imity to the ruler matters now as much as in the Tudor court....

WE HAVE had a lot of things happening this week:

Shrove Tuesday for making pan- cakes; Ash Wednesday for fasting and abstinence; and the beginning of Lent, clashing with the patron saint of Wales, St David, thereby putting the...

i 0 RA MU MALT SCOICN .11ISCI ISLE OF COMPETITION Glimpse of the Beyond Jaspistos IN COMPETITION NO. 1870 you were invited to give an account of a brief visit to the other...

King Karpov Raymond Keene OVER THE PAST TWO WEEKS I have concentrated on the extraordinary play of young Gata Kamsky from the Fide semi- fmals in Sanghi Nagar. Not only does...

A first prize of £25 and a bottle of Graham's Malvedos 1979 Vintage Port for the first correct solution opened on 20 March, with two runners-up prizes of £15 (or, for UK...

Last rounds Frank Keating ABOUT HALFWAY through the fateful ten rounds of his fight with Nigel Benn, whenever there was a momentary respite from the mutual savagery, Gerald...

Dear Mary.. . Q. I make donations to my local church by bank credit transfer under a deed of covenant. This is tax-efficient, meaning I can ultimately give more, and saves me a...