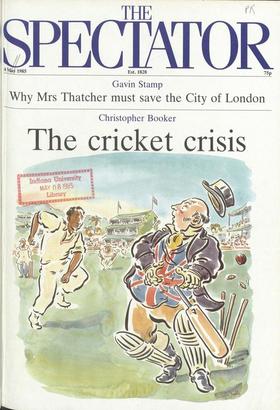 'I don't blame him, he's only obeying orders.' T wo large, gelatinous tears made their way down the cheeks of Chancellor Kohl when he told a press conference that it would be...

AS THE Spectator reported two weeks before anyone else (Notes, 31 March), there were difficulties about the Prince of Wales's visit to the Vatican. Here is what happened when he...

BUILDING THE WRONG SORT OF ENTERPRISE M RS THATCHER wishes to see Britain become an `enterprise culture'. To create such a culture, she contends, it is necessary that...

WE apologise to those readers and adver- tisers who may

have tried to telephone the Spectator on Thursday or Friday of last week. Building works severed our tele- phone lines, and British Telecom took more than a day to visit us at...

Why Welfare does not want a man of vision CHARLES MOORE 0 ne keeps being told that Mr Norman Fowler, the Social Services Secretary, has 'grown in the job'; there was a lot of...

PEREGRINE WORSTHORNE I t was a bit disturbing to read that my very right-wing American columnist friend, Patrick Buchanan, had been taken on by Ronald Reagan as his White House...

Television: a dreadful danger which Tories have overlooked AUBERON WAUGH It is against this background, or armed with this useful and rare piece of know- ledge, that one...

THE COARSENING OF CRICKET

modern cricket: money, violent bowling, the one-day game and the South African factor LIKE THE Palace of Westminster, the Dictionary of National Biography, the postal service...

ALL QUIET ON THE HOME FRONT

How US wartime prosperity explains Washington WITH RONALD Reagan's insistence on putting posies on the graves of storm troopers it may look like springtime for Hitler in...

THE MAKING OF POLISH PRUSSIA

Timothy Garton Ash on the implications of a dissident academic's sudden dismissal Warsaw SOMETIMES we must thank heaven for little subs. 'Kremlin Nod to Polish Re- forms' said...

SAVE LONDON FROM PALUMBO

Gavin Stamp urges the Cabinet not to return to the planning follies of the Sixties AS ONE of the instigators of the telex to Rome appealing to the Prince of Wales to ,save us...

THE RETAILER OF IDEAS

Survivors: `Thatcherite' before Thatcher 'WHO IS THAT extraordinary man? No, no, just arrived, over there, tossing his hat across the hall onto the hatstand, hair parted in the...

THE THREAT FROM EDDIE SHAH

The Press: Paul Johnson welcomes a new shock to Fleet Street TWO THINGS strike me about the new ABC figures for the six months from October 1984 to March 1985. The first is...

Mr Bartley, lately the principal Con- servative Agent, publishes a remark- able paper in this month's Fortnightly. He declares that his party must, to survive, become frankly ,...

Say it with bottles

CITY AND Suburban's reader of the year must be John Goldsmith, who has set a precedent which I hope will be widely followed. My note on the high-interest bank accounts pioneered...

THE STOCK Exchange's ditchers, who. would reject their new constitution and damn the consequences, are being told tht the first consequence would be the loss of most of their...

Not being a bird, Nigel needs to fold his wings CHRISTOPHER FILDES I cannot find anyone, except the com- mercial manager of Lufthansa, with a good word to say for the summit...

THE CITY is better at preserving the temple of Mithras than the temples of its own diety, Mammon. There is a mithraeum in front of the Legal & Gener- al, a Roman mosaic in the...

Sir: There have indeed been design changes. What on earth

is the purpose of all those vertical lines between columns? Is it scaffolding, are your contributors being caged, or is there some new Euro- regulation we should know about? The...

Sir: Sam Brittan says the recent book by Peter Jay ('Jay's Guide', 13 April) will 'come as manna from heaven' to econo- mics undergraduates. But he is very ambi- guous as to...

Sir: When I opened my Spectator (27 April) this morning

I said: 'My God, the Australians have moved in at last, it's like the bloody New Statesman.' I then saw the first paragraph of Colin Welch's article. C. C. Spicer Churchtown,...

Sir: Your new layout is ugly, loud and a waste of paper. I do not think it will help to sell your magazine unless your new target audience is philistine cretins. Did you pick...

Sir: I was proud to find my life of Hugh Dalton in a list of four which, according to Mr Worsthorne, have received the critics' approval (Diary, 20 April). But I was puzzled by...

Sir: Before the new designer is let loose on the

second half of your magazine, may I suggest that you call a temporary halt to his endeavours while you poll your readers (and contributors), asking them whether they approve the...

SUBSCRIBE TODAY! I would like to take out a subscription to The Spectator. I enclose my cheque for £ (Equivalent $ US eit Eurocheques accepted) RATES: 12 Months 6 Months...

To make the punishment fit the crime COLIN WELCH N o, long ago the New Statesman pub- lished an excellent article by Richard Kin- sey and Jock Young about crime and the...

Lindbergh's victim Max Hastings The Airman and the Carpenter Ludovic Kennedy (Collins £12.95) rr he traditional bourgeois enthusiasm for capital punishment is founded upon...

Bringing the dead to life

Peter Quennell The Craft of Literary Biography Edited by Jeffrey Meyers (Macmillan £22.50) G iovanni Battista Tiepolo was one of V those fortunate artists who have a large and...

From jumping to flying

When he looked at her, he invariably felt Like stretching his arms up, as if about to do A long and lustrous yawn. Of course she knew She had that effect; and whether she...

Francis King From an Inland Sea David Harsent (Viking £8.95) This is the kind of novel in which the two 1 chief characters are often called merely The Man' and 'The Woman'. But...

Patrick Marnham The Untravelled World: A Memoir Michael Adams (Quartet £11.95) - r - 1 own the long vista of memory I see a I — , slight figure striding up through the pine...

'I'll tell my mum,' she said, 'Balls,' he replied, And by them he was led Until he died. Cliff Ashby

Sarah Bradford Cavour Denis Mack Smith (Weidenfeld & Nicolson £12.95) O m glance at the cover portrait of this biography tells you more than words ever could about its...

Moores or less Alistair Hicks 14th John Moores (Walker Art Gallery, Liverpool till 16 June) 6 ou pays your money and takes your chances', for although the John Moores has been...

Return of the natives Peter Ackroyd Utu ('15', selected cinemas) H ere is another curiosity, a film from New Zealand in which Maoris play the starring roles. Utu (which...

Crowning glory Peter Phillips A nniversaries are becoming an idee .A.fixe. Every day must be the anniversary of something, as the back page of the Times so eagerly chronicles,...

Reminiscent Alexander Chancellor M y re-introduction to the joys of televi- sion after a three-week absence took place last week in the offices of the Spectator where I was...

Soapbox Taki New York T was limping up Park Avenue after some lmayhem at the karate dojo when I noticed a good-looking blonde girl staring at me in that particularly...

Traveller's tale Jeffrey Bernard S eville was very much all right. Cordoba with its wonderful mosque was frac- tionally marred by the presence of a party of American lesbians...

Tomfoolery Alice Thomas Ellis E very decade or so I make up my mind that now I've cracked it, that I have understood the secret of the universe, the meaning of life and the...

Sheep's lib P. J. Kavanagh W hen we camped outside the walls of Coole Park the thought of Yeats inside, being fed tit-bits by Lady Gregory, made me muse (in the field in my...

Jaspistos reports: Competitors were asked for a response, in poetry or prose, to the change from female to male voice on the part of the Speaking Clock. Twenty-four years ago...

No. 1370: Horticultural Set by Charles Seaton: Poets praise gardens often enough, but they seldom give us much in the way of practical advice. Helpful verses, please, on any...

corked? w hat do you do when the wine is corked? This is one of those ques- tions beloved of the gentlemanly cartoon- ists and humorists of the Twenties and Thirties (I can...

sauce, duck breasts with elderflower fritters and kiwi with everything, go the the Ark. Their honest French cooking is infinitely reliable. There are, in fact, two Ark...