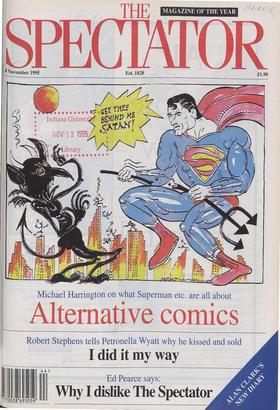 Special relationship M r John Major, the Prime Minister, supported M. Jacques Chirac, the French President, who paid him a visit, in his deci- sion to set off the third in a...

Of course there's a lurch to the Right Labour can't get any Righter BORIS JOHNSON J ohn Major has at last planted his ban- ner in the centre-ground, and the battle is on. When...

ALAN CLARK H ow lovely to be invited to write for The Spectator again. Now that the loath- some sneering features, pastily glistening, of its former editor peer slit-eyedly out...

• • The origins of America's comic superheroes lie in the 1950s, writes Michael Harrington, but Batman, Superman and Wonder Woman remain up to date BATMAN, SUPERMAN and...

WHAT WAS A POOR NAZI TO DO?

Some of Germany's caring liberals were once not as liberal as all that, writes Andrew Gimson Berlin `MAKE ME into a mass murderer,' the famous German journalist, Peter Grubbe,...

Ruth Deech looks at Lord Mackay's anti-divorce proposals and decides that they will mean more divorce AS a teacher of family law for 25 years, I have been disappointed to see...

THEN.. . Anne Applebaum wonders why dying Russian statesmen always inspire the same eulogies It is said that Talleyrand, being told that Czar Alexander would not be attending...

WHY SHOULD WE BE CALLED CADS?'

Petronella Wyatt visits the 'shocking' and 'reprehensible' Sir Robert Stephens, the first man to kiss and tell Lady Antonia was just one. The others included the actresses...

THE AMERICAN cemetery at Madin- gley, near Cambridge (where King Edward VII lived during the brief peri- od in which he figured as an undergrad- uate), is an impressive sight,...

PITY the poor translator, and they often are poor, getting bad pay and little thanks. The difficulty of the task came home to me when I was in Spain for that medical conference...

Whatever the British might hope, the French view of Europe is almost identical to the German one, says John Laughland PERHAPS THE Germans do have a sense of humour after all,...

DOCTORS are not immortal, and less surprising still — neither are their relatives. And thus I found myself last week on the way to London, to visit an aged uncle of mine who had...

SOME OTHER ZEIT Edward Pearce explains why he has long disliked the sight of this magazine THE IMMEDIATE defect of The Specta- tor is an overdone dandyism. Immured in a...

LETTERS Puffed up with pride

Sir: I hope it is not too late to make a per- sonal comment on Kingsley Amis's kind- ness of heart — a quality which, according to Charles Moore (`Memories of a great novelist',...

Sir: Who is Auberon Waugh trying to kid (Another voice, 28 October)? We all know that Sophie Watson is his daughter and this blatant plugging of her novel is pilgerish to say...

Danger to the public

Sir: It is, of course, sad to read of a young man's terrible accident on a motorcycle in Your 'High life' column (21 October). What, I wonder, happened to the poor man in the...

Sir: It was interesting to read the account by Martin Vander Weyer (`Trains and boats and planes ... ', 28 October) of cross- Channel ferries. My own, and only, experi- ence was...

Sir: Ma Yuzhen writes: 'China's modern history is ... never one of territorial expan- sion or invasion of other countries' (Let- ters, 28 October). What about Tibet? China has...

Sir: Kingsley Amis was not opposed to accepting hospitality from

publications other than The Spectator. In 1984 he agreed to become the Daily Mirror's poetry editor, a position he held until the arrival of Robert Maxwell ('Why are we paying...

Sir: It may interest Ms Wordsworth (Mind your language, 7 October) to know that not every person who reads Trollope has also read the Bible, speaks French and knows when...

No need to apologise

Sir: Studying Heath's Alice in Wonderland cartoon (Portrait of the week, 28 October), I wondered, not for the first time, why political cartoonists, when drawing inspira- tion...

Sir: It would not be difficult to take issue, at length and in detail, with almost everything Alexander Waugh has to say in his extraor- dinary piece (Arts, 14 October). To...

Sir: Jenny McCartney's article connecting the decline of churchgoing with the growth of fitness clubs (`Forgive us our dietary trespasses', 28 October) came to mind last Sunday...

Sir: Look, I don't buy The Spectator to read socialist tosh. Get rid of mutton-head John- son! Professor H.M Currie 25 West Street Yarm, Cleveland It is unclear whether this...

A deus ex machina for America's looming race crisis PAUL JOHNSON C olin Powell will make a fine president. He will give the United States the sureness of leadership it has...

Never put off to tomorrow what you can leave until the day after CHRISTOPHLR FILDES I t was, so I have always understood, the Mayor of Blackburn who, on taking office, pledged...

Maya Flick, woman from Egham, strikes a blow for embittered wives everywhere SIMON JENKINS W hen archaeologists come to dig up the remains of our civilisation, they will light...

Her body shattered, her soul goes on

John McEwen THE DIARY OF FRIDA KAHLO: AN INTIMATE SELF-PORTRAIT with an introduction by Carlos Fuentes Bloomsbury, £25, pp. 295 T his is a picture book, a must for Frida Kahlo...

But not influencing people

Anthony Howard BARRY GOLDWATER by Robert Alan Goldberg Yale, £18.50, pp. 463 I t is more than 30 years since Barry Goldwater contested the US presidency, but, unlike most...

Last but not best

Anthony Blond VIRTUALLY NORMAL: AN ARGUMENT ABOUT HOMOSEXUALITY by Andrew Sullivan Picador, £14.99, pp. 212 M r Sullivan irritated the participants on Start the Week the other...

A course in Euro-aversion therapy

Unhappy in its own way

Kate Hubbard THE LIARS' CLUB by Mary Karr Picador, £14.99, pp. 320 T o say that The Liars' Club is a memoir of a dysfunctional Texan family is both true and also reductive. The...

A tale of shameless sensation

Juliet Townsend THE CHASE by Louisa May Alcott Century, £12.99, pp. 242 A ny reader of Little Women or Good Wives will know that Jo, the character based so closely on Louisa...

At last the undivided Self

Jake Michie JUNK MAIL by Will Self Bloomsbury, £12.99, pp. 402 A lthough Will Self is a prominent and garlanded feature of the British liter- ary topography (to use one if his...

Her absence is a presence, An unaccustomed silence That scratches the kitchen door Or thumps its tail on the floor Distant as death is near, The daughter who held her dear Lifts...

Comedy Tapping true energy Mark Steyn remembers Buster Keaton on the centenary of his birth H e liked to cook and he knew how to make a custard pie. First, bake two crusts;...

Identity problem John Spurting on the brutal character of the South Bank gallery T here is not much sense of power in Art and Power at the Hayward, unless it is the power of...

Pedal appeal Gavin Stamp T he time has come: I cannot prevati- cate any more. Back in August, when I began to try to introduce Spectator readers to the joys of 'Not motoring',...

Family fortunes Taki he Big Bagel has never seemed gayer — and I use this in the old sense of the word, as well as in its present meaning. Incidentally, why is it that so many...

Under starter's orders Robin Oakley P erhaps columns should begin with con- fessions. Why racing for a man who spends far too much of his waking life in and around the Palace...

Portrait of a donor Nigel Nicolson The artist was the late Rodrigo Moyni- ham I gave him six sittings of an hour each in his Chelsea studio. Uncertain whether conversation...

What's it all about? Jeffrey Bernard I am at home again in a haze of mor- phine, which I was told would take 48 hours to be metabolised, but it is 72 hours now and I am still...

BRIDGE Baffling bidding Andrew Robson GLANCING THROUGH a comprehen- sive encyclopaedia of bridge published in 1967, I noticed the dominance of card play technique over...

Staunton honoured Raymond Keene THE FIRST MATCH closely resembling a modern world championship was the Staunton-St Amant contest in Paris in 1843, which established an...

Late Bottled Vintage 1989 Port for the first correct solution opened on 20 November, with two runners-up prizes of £15 (or, for UK solvers, the Chamb- ers Dictionary – ring the...

Is there passion? Simon Barnes HERE ARE SOME overwhelming ques- tions. Is Marcel Proust better than James Joyce? Is Buddhism better than Islam? Is rugby union better than...

Dear Mary.. . Q. I live in France. My English-speaking friends do not, in the main, come from the same social background as me. Whilst this is often interesting, it can also be...