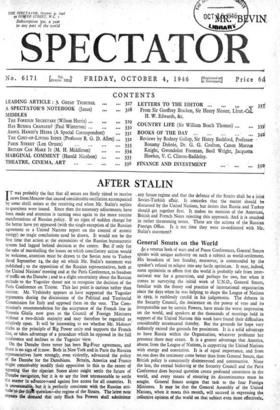 I T was probably the fact that all senses are finely tuned to receive news from Moscow that caused considerable oscillation accompanied by some shrill noises at the receiving...

General Smuts on the World

4s a veteran both of wars and of Peace Conferences, General Smuts speaks with unique authority on such a subject as world-settlement. His broadcast of last Sunday, moreover, is...

Because the Labour Government has been re-elected at last week's Australian General Election with only a slightly diminished majority in the House of Representatives, some...

The contrast between the current attempts of the French parties to frame a constitution for the Fourth Republic and General de Gaulle's repeated statements of his own conception...

The reasons, whatever they are, which prevent the daily Press from giving adequate space to the most important question in the world have prevented an extremely important report...

Culture .on the Air

The preliminary opinion of most far-sighted observers, when the B.B.C.'s third, or cultural, programme was first foreshadowed, was that it couldn't go wrong. The ways of gotod...

The Conservative Conference held at Blackpool this week is inevit- ably an inquest on failure as well as a readjustment to the future. The prospect is undoubtedly overcast. An...

B Y Its fi nal act the Nuremberg Tribunal has justified itself beyond all argument. The late war was like none before it in modern history, or indeed in any history. Unprovoked...

It may be taken for granted, I think, that the

whole question of the future of War Agricultural Committees will be called in question both inside and outside the House of Commons in the next few weeks. The Odlum case in...

Now, I suppose, the rather drab and extremely German court-

house at Nuremberg will revert to its normal uies. The white- helmeted guards will go, the ear-phones be put in store for some international conference, and the prison-cells...

Football pool firms are breaking no law, but their activities

are plainly anti-social, and the more that gets impressed on the public mind the better. On the methods of pool-touts the paragraph I published last week has produced more...

The Vice-Chancellor of Cambridge did well to draw attention, in

his address to the Senate on Tuesday, to the fact that the University is short of lodgings for about 1,200 undergraduates because about 1,200 civil servants have been planted on...

Both the readers and the staff of this journal will

have learned with relief that conditions in the printing trade are back to normal, and deliveries should once more be regular. Into the rights and wrongs of the disagreement I...

M EMBERS OF PARLIAMENT who during the long recess have almost forgotten that they are Members of Parliament will get their memories back on Tuesday when the House reassembles...

By ,WILSON HARRIS A FEW weeks ago, exchanging a word or two with Mr. Bevin in the Members' Lobby, I told him, with no very serious intent, that I thought he really ought to...

By PAUL WINTERTON T HE reception accorded in many quarters to Stalin's latest pro- nouncement was a symptom of the political illness from which the world is suffering. The...

FROM A SPECIAL CORRESPONDENT L ITIGATION, little-known but romantic in character, affecting vast territories in the Middle East, seems about to enter on a new, and perhaps...

By R. G. D. ALLEN T HE index of the cost of living calculated by the Ministry of Labour touches the people of this country more than any other statistical figure. It is not...

By LEN ORTZEN A HEAVY courtyard door groans open, two or three shutters clatter back against the wall high above the roadway, a rag- picker shuffles out of a narrow, dark alley...

BRITAIN CAN MAKE IT

By M. H. MIDDLETON B UT if only Britain could ventilate it as well! If you're really interested, take a " season " and visit a section at a time. Don't try to see everything in...

" The Big Sleep." At the New Gallery and the Tivoli. " L 'Atalante." At the Academy. The New London Film Society. At the Scala. THE first cycle of gangster films, which began...

"The Shephard Show." Devised by Firth Shephard. At the Princes Theatre. THE silver gleams, the napery is spotless, there are lots and lots of courses and the fare can hardly be...

HOUSING Mr. Topolski is like caging a whirlwind. One almost expects the Leicester Galleries, like a Disney shack containing Donald Duck in a tantrum, to suffer from the...

readers are urged to place a firm order for it with their newsagent or to take out a subscription. Subscription rates 3os. for 52 weeks, 15s. for 26 weeks. Instructions, with a...

SIR,—Mr. Churchill's proposal for a United States of Europe has some- what overshadowed the basic idea of his Zurich speech that now is the time for a " blessed act of oblivion"...

SIR,—To those who know anything of the scheme for so-called Church Union in South India, the article about it in The Spectator of Septem- ber zoth is not only markedly one-sided...

JAPANESE CAMP CONDITIONS Sta,—I have heard today from a friend who was interned with me in the civilian camp at Singapore, and who has lately returned to her work in Malaya. I...

STR,— General Anders and seventy-five of his officers have been deprived of their Polish citizenship by the Government now residing in Warsaw. In normal times and under a normal...

SIR, —Under the heading Prisoners of War-in your Notes of Septem- ber loth you write: "There is in fact no justification for keeping any of them . . here at all sixteen months...

THE ARMY AND CLASS " B " RELEASES

Snt—One answer to Brigadier Low's qnestion, in his article of Septem- ber loth on Recruits for the Army, as to why there is practically no voluntary recruiting at the present...

Snt—Mr. Graham Watson's article dealing with The A.O.S. (The Spec- tator, September 13th) interested me, as I fiave recently been demobilised and passed through the Tavistock...

Snt—May I make a belated reply to Sir Murdoch McKenzie Wood's observations in The Spectator of September 13th? The fundamental error in Sir Murdoch's argument lies in his...

Sm,—There are a couple of thousand Britishers here who fled from Germany before the war. Some even managed to come to this country during the war. There are many British widows...

Sm,—Miss Winckworth and your other correspondents may be interested to know that Saint Agobard, writing in the ninth century, in his Absurd Opinion of the Vulgar Touching Hail...

Snt—Your comment on Mr. London's letter in your issue of Septem- ber loth wishes away a very real source of distress. I have known many recent cases of German families being...

Sta,—I fail to see why your correspondent, Mr. R. P. Delling, should regard the fact that one-third of Janus's audience of German prisoners understood English to be a comparison...

There seems to be one exception to the statement that no butterflies do any harm except the Cabbage Whites. A great authority tells me that the Painted Lady is an enemy of the...

In My Garden The herbaceous border is wont to become

a rather untidy and sombre ribbon in October, apart from its dahlias, chrysanthemums, montbretias and Michaelmas daisies, which do not all consent to an easy mutual relation...

WE all know how many good and beautiful trees were felled during the war ; and they gave us more useful timber than anyone had thought possible. What is not generally known is...

Resistant Apples There is general agreement that Cox's Orange Pippin

is the best eating (to use our odd idiom) apple ; but there is no agreement about the next on the list. On one, that seems to me wholly admirable, there is violent disagreement...

SIR,—Your paragraph under the heading of Coal and Current in your issue of September loth seemed to me to deal with Mr. Shinwell's attitude to electricity supply with...

Alleged Lilies After visiting Palestine some years ago and in

the course of botanical wanderings admiring the carpets of scarlet anemones, I was quite con- vinced that by the "lilies" of the Bible was meant the anemones ; but there is a...

Visitors to Portugal They Went to Portugal. By Rose Macaulay. (Cape. 18s.) IN the early nineteen-thirties a Lisbon evening paper published a cartoon which attracted some...

Why No Nurses ? By James Barclay. (Faber and Faber. 6s.) ON pages 152 and 153 of his book, Mr. Barclay suggests that a completely new committee should be appointed to deal with...

The Peace of the Augustans. By George Saintsbury. World's Classics. (Oxford University Press. 3s. 6d.) IT is no use to pretend that this is a review of Saintsbury's now famous...

Side-Lights on the World War

WE have here a livre de bonne foy, which will be read with lively interest by those who appreciated the same author's Viewless Winds of i dozen years ago. This Australian doctor...

The Church of England in the Twentieth Century. VoL 1. By Roger Lloyd, Canon of Winchester. (Longmans. 15s.) CANON LLOYD has set himself the difficult task of trying to estimate...

The Good Life : An Anthology of the Working Life in the Country. Compiled by C. Henry Warren. (Eyre and Spottiswoode. 10s. 6d.) IN this age of quick and scrappy reading, with...

Grierson on Documentary. Edited by Forsyth Hardy. (Collins. 16s.) " A CLUMSY description, but let it stand." Thus, early on in the development of the documentary film, did its...

WHY Robert Penn Warren's book should be called At Heaven'! Gate is not clear. It is not about larks. It tells the story of a crooked financial magnate in a Southern State of...

WE are so used to the feeling of having them up there and of their coming down here, and to that old joke and all the others, that the title of this book is in itself...

SOLUTION TO CROSSWORD No. 393

[A Book Token for one guinea will be awarded to

the sender of the first correct solution of this week's crossword to be opened after noon on Tuesday week, October 15th. Envelopes must be received not later than first post...

By CUSTOS EVEN the most enthusiastic Stock Exchange " bull" must be con• vinced by now that there has been a real change in investment psychology. Selling this week has not...