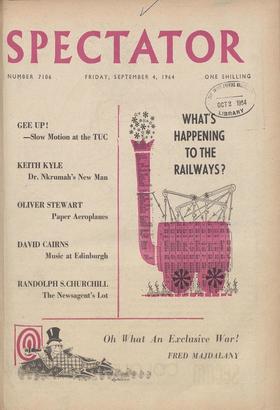 - Portrait of the Week— NOW IS EMPHATICALLY NOT the

time for a change,' said Mr. Butler unemphatically in -a party Political broadcast. He made four main points Which many thought would be the chief planks 111 the Tory platform:...

I T may be true that the old grey mare ain't wot she useter be. But Low's TUC cart- ' horse most certainly, most depressingly, is. Ever since 1951 Tory Ministers of Labour have...

DREW MIDDLETON writes from Paris: Every place is the same place now. This no particularly original thought struck me sittin at a cafe in Lyon at five-thirty of an August...

Ouvra STEwART writes: During the Society of British Aerospace Companies' exhibition and flying display, which opens on Monday at Farnborough, there will be, if the event runs...

The Task for Labour By DAVID WATT This is a question on which a great deal turns, for the key to the present situation clearly lies in the hands of the party which is able to...

By KEITH KYLE F OR Ghana, with only 7,200,000 people, con- tinental union is not only a political ideal, but an economic imperative. On the surface her 'seven-year development...

The Newsagent's Lot By RANDOLPH S. CHURCHILL During previous articles discuSsing the prob- lems of the colour supplement battle our commentator on the press undertook to...

Echoes of a Report-5

What is Happening to the Railways? By D. L. MUNBY N o report since Beveridge had such wide press coverage as the Beeching Plan. Supporters and opponents hailed it as masterly....

Shaken by the Estimates Committee's revela- tions on Service expenditure (e.g., it costs us £1,000 a year to keep an Army dog in Singapore), some taxpayers at least must have...

On to Megalopolis At the British Association's - meeting, Mr.

A. A. L. Caesar's depiction of the megalopolis which is to extend over the South-East and the Midlands (with bits of countryside left in to fill the role of. city parks) was...

August for the people ... Yes, but not, ordinarily, a good month for con- noisseurs of the English scene. The landscape turns dusty and the trees hang, like metal imitations, in...

Injustice The Scottish and Welsh Nationalists represent one form of

resistance to the steam-rollering of local identity. Dotty as, I fear, their ultimate purposes irremediably are, they exert a mild appeal which persists through all electoral...

The meaning of the old politicians' clichd, that a good summer is a powerful ally to a govern- merit approaching an election, is not, of course, that line weather and happy...

This spirit of unwilling acceptance recurs in Mr. Geoffrey Moorhouse's new Penguin, The Other England, which is a readable and interest- ing account of life and its problems...

From MICHAEL LLEWELLYN SMITH ATHENS Untsr thing on returning after nine months' absence was to wander round old haunts and stare nostalgically at the old flat, deploring the...

SARAH GAINHAM writes from Bonn: There have been attempts lately in Germany to look at Hitler; if possible objectively but at any rate to look at a figure that seemed to dis-...

Oh What an Exclusive War!

By FRED MAJDALANY W HAT one particularly remembers about September, 1939, is how hard it was at first to get in the act. It was an exclusive club; ihe Kitchener poster in...

dealt with the document 'Mutual Responsibility and Inter- dependence in the Body of Christ' and rightly des- cribed it as 'something of really shattering importance to the...

attention to the Chairman of London Transport's recent warning that public transport in the capital must be positively encouraged, picks holes in one or two of the answers to a...

UPHOLDING THE ESTABLISHMENT Sus,—I think the 'gifts' from which the

Church Commissioners derive an annual £17 million in- come, referred to by Colonel Hornby (August 21), should be categorised lest they be equated with the Countess of...

Colour and the Election Norman Tiptall The Church's Wrong Foundation

SIR,--Gillian Hawtin, I think, is still labouring under a misapprehension.

People who have left money for Church purposes have done so primarily for the Glory of God, not for national purposes, though the nation has often benefited indirectly through...

SIR,—Neither the Bishop of Southwark nor Mr. Jones has helped

me very much. Of course I respect the Anglican point of view, and my original letter did not seek • to compare the value of traditions—only their difference. 1 still wish to...

really won't do for Mr. Hollis to chalk it up

as a credit to Christianity that it saved us all from the fear of castration. The cults of Cybele and Allis were cults of the mystical, fanatical few, whereas Christianity has...

FEW CHEERS FOR THE AA

SIR,—It is a pity that Lord Brentford hides behind expressions such as the 'general consensus of opinion' (of members) as he states earlier in his letter that only those who...

21) in his review of the Dylan Thomas books were both timely and illuminating. His was the balanced view—in opposition to the castigation of Holbrook and the baffling, praising,...

THE OUTSIDERS SIR,—Many people will sympathise with Barbara Smoker who

has lost part of her small capital in the Rolls Razor collapse, It should never be forgotten, of course, that investment in equities is a speculation, but, as her reference to...

to Johannesburg is the fourth case of this nature to become public in recent years. Only last month there was the alleged abducting of Mrs. Rosemary Wentzel from Swaziland. In...

SIR,--Mr. Christopher Hollis is obviously right about the early Christians. The difference in moral outlook between Christianity and the higher pagan- ism has been overstressed....

S1R,—Are our manufacturers going entirely mad? Last week I went up north, and found I had for- gotten to take a razor. So in a Lincolnshire town I went into a branch of a...

By DAVID CAIRNS EDINBURGH, 1964, begin- ning in gloom, has con- tinued in triumph. I cannot remember a week of music which so de- lighted me—enlivening dull responses and...

In Youth is Squalor

The main bid for originality seemed to lie in the use of soliloquy, by which means the hero was enabled to give the story a shove when needed and also to promote his own...

The Taming of the Shrew. (Glynde- bourne.) by waving their flag in the first place. Unneces- sary terms like theatre of violence, or of the absurd, seek the wrong kind of...

By CARYL BRAHMS Jr I were a distinguished stage director—a Guthrie, Tony Richardson,Zeffirelli, or one of the Peters, Brook or Hall—and could pro- duce any plays I wished, I...

Brutalities of Power By C B. COX I N the past Marlowe has often been depicted as the exuberant Elizabethan humanist, 'still climbing after knowledge infinite'; in recent...

On the hilltop at Gorde, commandingly surveying a valley, are the houses of an abandoned village: the outward civilised structure contains emptiness. Nearby, the road furtively...

By LORD WILLIAMSON "1"` RADE unions are an essential element of a free society, but what is not always fully realised is that trade unions, while possessing certain rights, also...

June in her Spring. City of Spades. Absolute Beginners. Mr. Love and justice. By Colin Maclnnes. (Penguin, 3s. 6d. each.) 'CouN ivlAc:INNes,' sighed the lady of letters during...

A Significant Experience. By Gwyn Griffin. (Cape, 15s.) Incognito, by Petru Dumitriu, is an old-fashioned novel about a comparatively new sort of horror —life under Communism...

_MESSRS. CASSELL have placed the public greatly in their debt by now making Sir Winston Churchill's memoirs of the Second World War available in twelve paperbacked volumes. One...

Rebirth of Britain : A Symposium of Essi by Eighteen Writers. Edited by Arth Seldon. (Pan Books in association with I Institute of Economic Affairs, 5s.) YS ur he LAST summer,...

The Stock Exchange Gives a Lead By NICHOLAS DAVENPORT THE Stock Exchange is undoubtedly the most forward-looking and up- to-date institution in the City. It has to be, for if...

From Shirer to Kilvert

HE summer has been unusually prolik in the umber of war books published here in paper- ack, Easily the most monumental of the lot is he Rise and Fall of the Third Reich, by...

By LOTHBURY A BREAKDOWN of the very satisfactory pre-tax profits from Distillers shows that 83 per cent came from potable spirits, so that whisky and gin profits still form the...

By CUSTOS , 0 NE returns to the City roundabouts amazed at the calmness and firmness of the markets. A severe balance of payments crisis written up by alarmist economists seems...

• When the Balloons Went Up I have a vague impression that this is what did happen; but whatever happened I cannot have been alone when I heard the fateful pronounce- ment....

Next Generation ADRIAN By LESLIE FACED with a naked baby and an empty nursery, what does the new mother really need—apart from a nanny and a large bank account? (If anyone...

By ALAN BRIE N I find that I tend to overrate the trappings of success and prosperity-all those cool, sophisti- cated, metropolitan tastes in food and drink and clothes which...