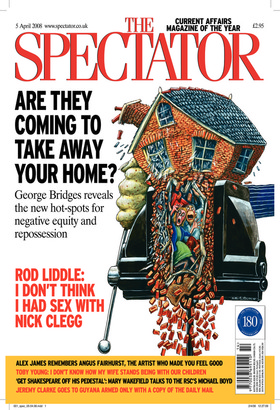 Y et again, New Labour’s predilection for spin and misleading statistics has landed the government in trouble. Ministers have long been fond of making the argument for...

to tell me how much money they’d made buying in Islington when they did. ‘Good for you,’ I’d say, hating them just a little. I’ve noticed that recently my friends have stopped...

Watch the Tories sidling up to the Lib Dems: the foundations for a post-election pact

N ow that Francis Maude is no longer lurking around Conservative headquarters dampening any high spirits he might encounter, bubbles of optimism are allowed to float with...

I f Boris Johnson wins the contest to become Mayor of

London on 1 May, he will not inherit an impartial civil service of the sort to which British national politicians are accustomed. There has only been one Mayor of London so far...

DIARY OF A NOTTING HILL NOBODY

MONDAY Head buzzing from v important Economic Strategy meeting. Total reorganisation of our smoothie expenditure, with half the budget to be spent on bran muffins. Lot of...

How scared should you be? Mining data of unprecedented sophistication, George Bridges unveils a map of future economic pain: the areas where repossessions and negative equity...

Is your home at risk?

DARK AREAS SHOW WHERE THE CREDIT CRUNCH WILL HIT HARDEST She is likely to be what it calls a ‘burdened optimist’. She and her partner strive for a ‘standard of living which is...

A chance for the Lords to justify their existence

The EU’s Lisbon Treaty was handled scandalously in the Commons, says Daniel Hannan . Now the Upper House has the chance to play its ancestral role as the conscience of the...

Politicians boasting about the women they’ve slept with is not candour: it’s spin

Rod Liddle says that Nick Clegg’s toe-curling remarks are part of a deceitful tendency in the political class to tell us things about themselves that we don’t want to know...

T hey shut our Post Office yesterday. For the first time in living memory there is no early morning light in that end of the ancient cottage and the little shop that went with...

Why hasn’t Britain got a sovereign wealth fund?

Martin Vander Weyer says that we resent the growing power of countries which shrewdly invest the wealth from their natural resources. We had North Sea oil, and we blew the lot...

Tatarstan is the Muslim girlfriend Putin locks up

Venetia Thompson dislikes the resignation she finds in the most quiescent of Russia’s Muslim states. But other republics will be less apathetic in the face of Moscow’s...

Alexander Chancellor says that it is the sort of food which the Prince should like: free of chemicals and genetic manipulation, produced on small family farms, and steeped in...

Sir: I doubt the suggestion in your leading article (29 March) that clause 14(2)(b) of the government’s Human Fertilisation and Embryology Bill is a moral disgrace. The Bill...

Sir: Matthew Parris (Another voice, 29 March) defends Barack Obama’s speech on race very well. But surely we ought to resist the core of Mr Obama’s case? The Reverend Wright...

Sir: May I be allowed a single comment on the gracious article concerning myself (‘A holy man tipped to lead the nation’s Catholics’, 22 March)? Towards its end, in response to...

Sir: I read the article by David Selbourne (‘We are living in a state of emergency’, 29 March) with a mixture of delight and puzzlement; delight at the argument thereof — apart...

Sir: Henry Sands is quite wrong (Diary, 22 March) when he claims that his pal Mr Tolstoy recorded the slowest time of the season on the Cresta Run this year. A chap with a group...

Sir: I was initially impressed by Charles Moore’s son’s theory regarding the position of our taste buds (The Spectator’s Notes, 29 March), according to which canapés and open...

I t was the 14 pints, I always thought, that ultimately did it for William Hague. That was the beginning of the end. There must have been teenagers out there in the 1970s who...

When markets come crashing down, send for the man with the big red nose

T oo early yet to say whether the present financial turmoils will end in a catastrophic maelstrom or simply slip away like an angry tide, leaving puddles. One has no great...

Is Australia’s economic luck about to run out?

Tim Soutphommasane says Prime Minister Kevin Rudd, who is in London this weekend, inherited a boom but now faces threats from China, inflation and global downturn A ustralia’s...

A fundamental crisis of credibility

Simon Nixon says loss of authority at the Bank and the Treasury matter even more than the failings of the FSA D uring the boom years, it was fashionable to say that London owed...

A mask that eats the face

Flies on the wall

The Walk of a Friend

‘The walk of a friend, the line of a melody, the healthy throbbing of a motor, are known when they are seen or heard.’ Scott Buchanan: Poetry and Mathematics (1929) And so...

Boys will be boys

Sounds of the Seventies

A subject in need of a writer

‘H ave you your next book in mind?’ ‘Not yet, I can’t fix on a subject,’ my friend replied. ‘What about Ouida?’ I said. Actually this exchange has taken place a couple of times,...

Mary Wakefield talks to the RSC’s Michael Boyd and learns how he scared the Establishment H alfway through our interview, in the middle of a discussion about the future of the...

Andrew Lambirth Cranach Royal Academy, until 8 June F riend of Martin Luther, and court painter to the Elector of Saxony (who was Luther’s protector), Lucas Cranach the Elder...

Deborah Ross Son of Rambow 12A, nationwide S on of Rambow is the tale of two young boys — one from a strict religious background; the other a troubled troublemaker — who come...

Marcus Berkmann A s in real life, it’s considered faintly reprehensible in music to have a sweet tooth. Greens are good for you, and so is The Velvet Underground, but right now...

Michael Tanner Carmen Royal Opera House W hat is an opera house for? The question would sound silly if it weren’t being asked in a particular and, in this case, rather...

Kate Chisholm T wo dramas, both based on real life; two deaths by shotgun; two black men destroyed at their peak (although both plays seemed intent on suggesting that their...

James Delingpole A ccording to a recently divorced friend of mine, the sex opportunities when you’re a single man in your forties are fantastic. Apparently, you don’t even need...

Robin Oakley I t would have been nice to be at Nad Al Sheba racecourse last Saturday to see the burly, majestic Curlin obliterate the pretenders to his crown as the best...

In the last few months, I have idly watched the slow spread of a green moss in a very shady place on the north side of our house and, then, the seeding into that moss of the...

There will be blood

Taki S artre was a far greater fornicator than philosopher, but he did come up with the greatest truism of them all: ‘Hell is other people.’ (The last line in one of his...

Jeremy Clarke T he woman hired by the National Trust to see that nothing is pilfered from the upper floor at Clouds Hill, and to answer the visitors’ questions, knew almost...

Richard Sennett Texas ‘N o buffalo-thyme pizza?’ The grazinggrounds around Naples are poisoned, grounds on which herds of water buffalo feed to produce Italy’s most delicate...

T he budget has hit wine merchants and drinkers quite hard. Those of us who like a sophisticated slurp are paying the price for those who drink themselves senseless on Friday...

Land of the giants

Jeremy Clarke marvels at the fauna of Guyana’s rainforests T here was a punch-up in the cheapest seats on the flight going out to Guyana, three against one, women screaming, red...

John Torode takes the healing waters at Wiesbaden and Baden-Baden I t’s not often that you come across a living god while hovering outside your hotel idly wondering — why the...

Spending time with my children makes me appreciate my wife. How does she stand them?

I am so strapped for cash that I have been forced to give up my outside office and start working from home. With three children under five, this is far from ideal, but at least...

‘I wonder,’ writes Kim Parsons from Helston, or nearby, ‘if you have seen the new government-generated No Smoking signs which declare: “It is against the law to smoke in these...

O ne distinction between the private and the public sector is

that the former generally has an incentive to offer customers a variety of levels of service, while the latter doesn’t. That’s why you can get a pizza delivered to your home...

party. For obvious security reasons my husband and I will not go out but have agreed not to show our faces downstairs. This raises a problem with food. Our son refuses to have...

Q. On arrival at a London hotel I usually insist

on carrying my own case to my room because of uncertainty about how much to tip the bell-boy at, for example, Claridge’s. I consider it better to pretend my case is too light to...

Q. How can I tactfully tell a friend who emails

me too often that I simply don’t have the time for an epistolary relationship? I know her enthusiasm is partly on account of her enjoyment of her own writing style, but I cannot...

Q. It seems that the two most celebrated of London

SW1 emporia no longer do really big bath towels — six foot long or so. Can you help? This information may be vital to many of your readers. S.C., Northamptonshire A. Giant bath...

Q. At the risk of attracting a further accusation of

pedantry, may I draw your attention to the inadequate use of punctuation in your articles concerning the ‘black taxi rapist’ (8 and 15 March)? The simple insertion of a hyphen...